Some webpages are too damn hard to read on my phone, like this one:

The font is tiny, the page is wide, and the text is wrapping at a weird place. I must read these on my phone like a PDF: scrolling in and panning along each line.[1]

This post is my guide to fixing these issues. It’s aimed at folks like me who aren’t quite web developers, but blog or run small sites that could use a little fine-tuning.

Disclaimer: I’m not a web developer. I have no idea what I’m doing, really.

How to Fix Common Problems

Permalink to “How to Fix Common Problems” #

Does the page look like a desktop site zoomed way out? You might need to tell web browsers to render the web page at the actual device’s width.[2] Add this HTML tag:

In action, this makes the following change:

Now the text renders into a more reasonable area. This makes the font look bigger and the lines wrap much earlier. But the page still has a problem that’s making the text only take up half the page. Something is too wide.

Over-wide elements are easy to miss even from your phone, because your phone might mask them with a horizontal scroll bar. If you accidentally scroll right, though, you’ll fly off the content.

Once you notice this happens, you can pinch to zoom out and survey the mess. Some element is probably too wide. Find the culprit.

Ah ha. In this case, it’s text in <pre> blocks. We can add some simple CSS to limit their width.

This solves it. Here’s the before and after.

No more scroll bar, and the width is correct. This section is a bit weird because of overly wide indentation. Here’s the same result on body text.

What About Bigger Screens?

Permalink to “What About Bigger Screens?” #

This article is only about making pages look better on mobile. I try not to break anything for larger screens, but naively applying some of these changes will make desktop layouts more cramped.

Left: For mobile devices, everything must adhere to the body width to avoid making the page scroll horizontally; individual wide elements can scroll on their own.

Center: For larger screens, we can keep the same strategy as with mobile displays and clip everything to the body region, but wide elements will still need to scroll.

Right: If we instead let wide elements spill outside the body area when there is room on larger displays, they won’t need to be scrolled.

When there’s more screen space, it probably makes sense to let larger elements take up more room rather than clipping them and making them scroll horizontally. Consider housing wide content in containers that can break out from the body text.

There are a few bits of low hanging fruit that will make a page go from functional to comfortably readable. (Don’t worry, I’m not going to make the text annoyingly light gray or anything.)

We can apply all these changes to our running example.

4. Test on Your Actual Phone

Permalink to “4. Test on Your Actual Phone” #

This last trick is the most important and also the easiest to skip. Believe me, I forget to do it, too. But there’s no getting around it.[3]

Yes, test it using your browser’s pretend I’m a phone mode first. But to this day, I’ve never made a page where I didn’t find something to change when I actually looked at it on my phone. It’s easier to recognize bad proportions on the physical device you glue to your poor eyeballs all day.

Furthermore, sometimes the browser simulators are just plain wrong. In fact, our running example is exactly one such case. I describe this more in the walkthrough below.

Click on any picture to jump to the walkthrough for fixing the mobile layout on that page.

Disclaimer: I’m nitpicking microscopic stylistic issues on these ages for the sake of illustration. Their actual content is largely fascinating, technical, and well-written. I humbly offer these example fixes because I like what the authors are doing and would like to enjoy it even more on my phone.

This is the site that I used as the running example for the first section. This page is called Commit Often, Perfect Later, Publish Once: Git Best Practices. The page looks like this on my phone:

Now, I can’t be too hard on the designer.[4] First, the page is from 2012—ancient Internet history.

Second, it’s actually kind of hard to tell this was going to happen. Normally, I would guess that they simply didn’t test it using developer tools. But if you ask Chrome and Safari what the page should look like on an iPhone X, they both say, “just fine:” 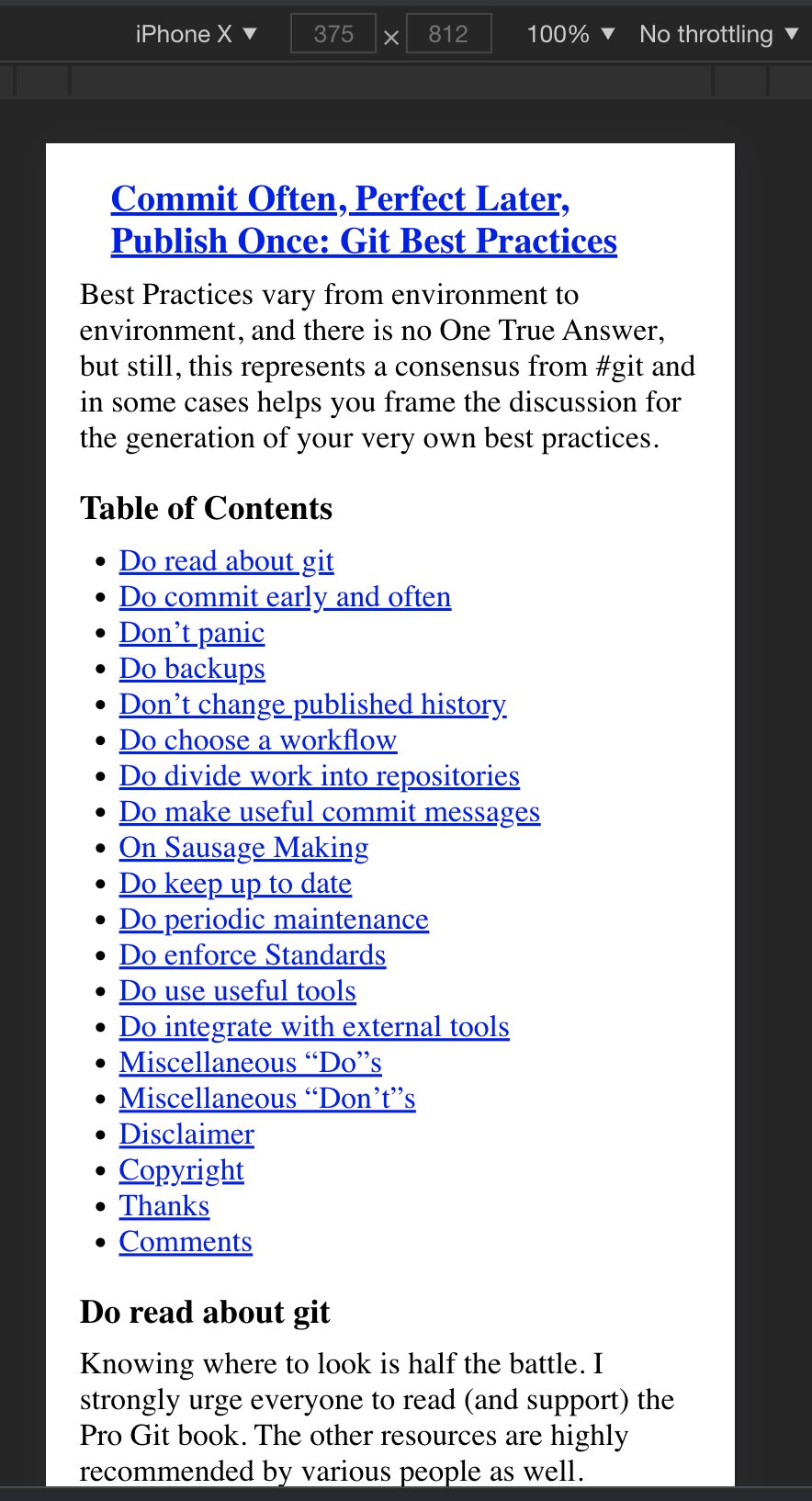 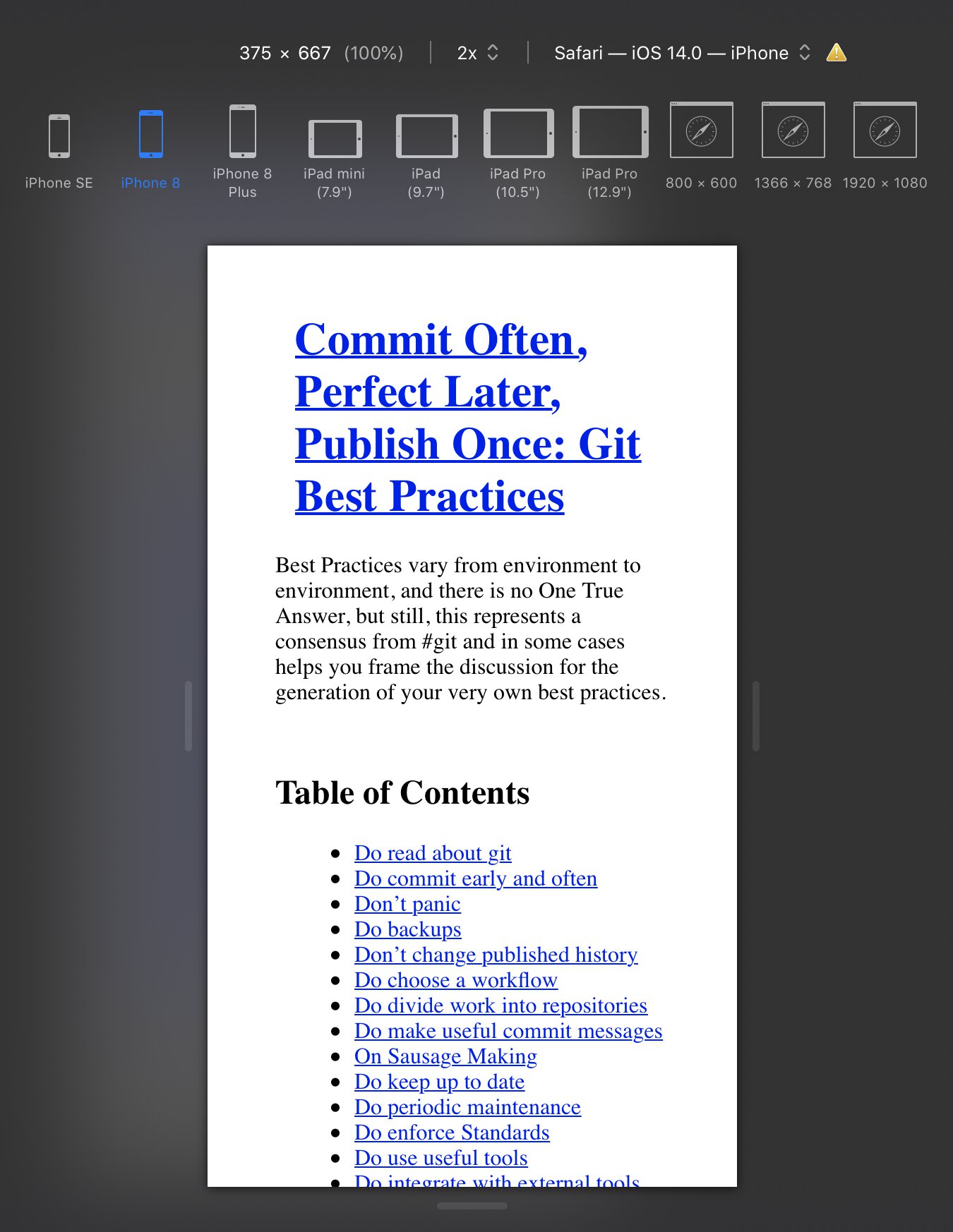 Permalink to “Fixing it” #

These fixes are exactly the ones I describe in detail in the first section, so I’ll run through them quickly.

Then, we stop <pre>-formatted blocks from stretching out the page width (fix #2).

Apply them all, here’s the before/after.

If we wanted to, one last thing I’d tweak is the indentation, which is so comically large as to end up taking up nearly half the screen width (really only glaring on an actual phone, AKA (fix #4):

… but eh, I’d say we’ve done enough for one evening. Let’s call it an exercise for the reader.

This page is called Poisson’s Equation is the Most Powerful Tool not yet in your Toolbox. The page’s viewport seems good, but you can accidentally scroll to the right, revealing a bigger page and likely overly wide elements (fix #2).

Left: the default view on pageload. Right: Zooming out to the page's true width after noticing horizontal scrollbars.

If we scroll down, we can see the worst offenders are, again, over-wide <pre> regions for code. They are already the correct width, but when their content overflows, it spills out.

We can fix these,

… but rendered math is still an issue. Like the <pre> chunks, they’re also set to a good width, but spill out.

The math chunks are all in <div>s with the CSS class math, so we can just add another selector to our rule:

And with that, we’ve tamed the over-wide elements and the page displays nicely.

If I were to add finishing touches, the two things I’d tweak would be the code and math.

The font size for code blocks is bigger than it needs to be (fix #3) and lacks syntax highlighting. If we make those two changes and then reduce the indentation from four to two spaces, we can even fit all the code without any scrolling—we just need to wrap two of the comments.

Aside: This was another place where it was instrumental to check on my physical phone (fix #4). Only there did I notice the code font was so large, and only there could I verify that it was still readable after reducing the font size.

The second aspect I’d improve is the math display—or more generally, the remaining elements that are have their own horizontal scroll bars because of their width.

When possible, it’s nice to have your content fit inside the display so people don’t have to scroll horizontally to see it. But it’s not always worth the effort to make that happen. I think typeset math is one of those occasions. It’s enough work just to make LaTeX display your math nicely, let alone making a version that fits on portrait-sized mobile screen.

But when we do have content that needs scrolling, I think it’s good to show people that scrolling is available. In other words, to show them when an element has the scrolling affordance. Showing content that’s cut off is a hint, but this isn’t reliable unless calculated explicitly, as the content might be cut off in a way that doesn’t reveal there’s more to see.

As I mentioned above, Apple’s browser seems to go out of its way to hide scroll bars. Even when they appear because you accidentally found something scrollable, they vanish a bit later. Can we make sure that our extra wide content has scroll bars them?

In short, I couldn’t robustly figure this out. Using the ::-webkit-scrollbar CSS selector, I could get really big chonky ones to always appear on Chrome, but not using Safari on my phone. Mozilla says this feature isn’t standardized yet, but that it should work on Safari and all iOS browsers 🤷‍♂️

Left: no scrollbars still on my phone. Right: I could get big ugly ones on Chrome on my desktop.

This page is called F# Is The Best Coding Language Today. Once again, a good viewport, but an over-wide <pre> code block. Jeez, what is it with these code blocks?

Left: After loading the page, noticing it's got a horizontal scroll bar, and zooming out. Right: The culprit code block.

Two oddities with this one:

Because of 2., I only made minimal tweaks in the browser’s developer tools to fix things (fix #2).

Fixed view of the top of the page (left), and the code block (right).

This fixes the page and makes the code readable. Hooray!

Nothing else major here, but I would wrap the comments in the code earlier so we could get rid of horizontal scrolling entirely. The URL, which would be hard to wrap, could simply be moved outside of the code.

This page is called Automated Hydroponic System Build. In a crazy turn of events, 🚨 it’s not code in a <pre> block this time! 🚨 This page actually contains pretty huge chunks of code, but they all obey the body width. What’s the issue, then?

An overly long URL, yeeted into the comments by none other than the author himself. Bummer.

In fact, there’s a different comment from another person that includes a URL that would also stretch the page (fix #2). This means that any commenter can break the mobile page layout 😱

I checked out the source, and saw each comment has class="comment-body". So if we simply add the CSS:

… then everything is groovy.

This page is called What are Diffusion Models? This time, it’s pesky math again, stretching a good viewport too wide.

We can tell MathJax to stay in its lane (fix #2) by adding the CSS:

… and the page is back in its box.