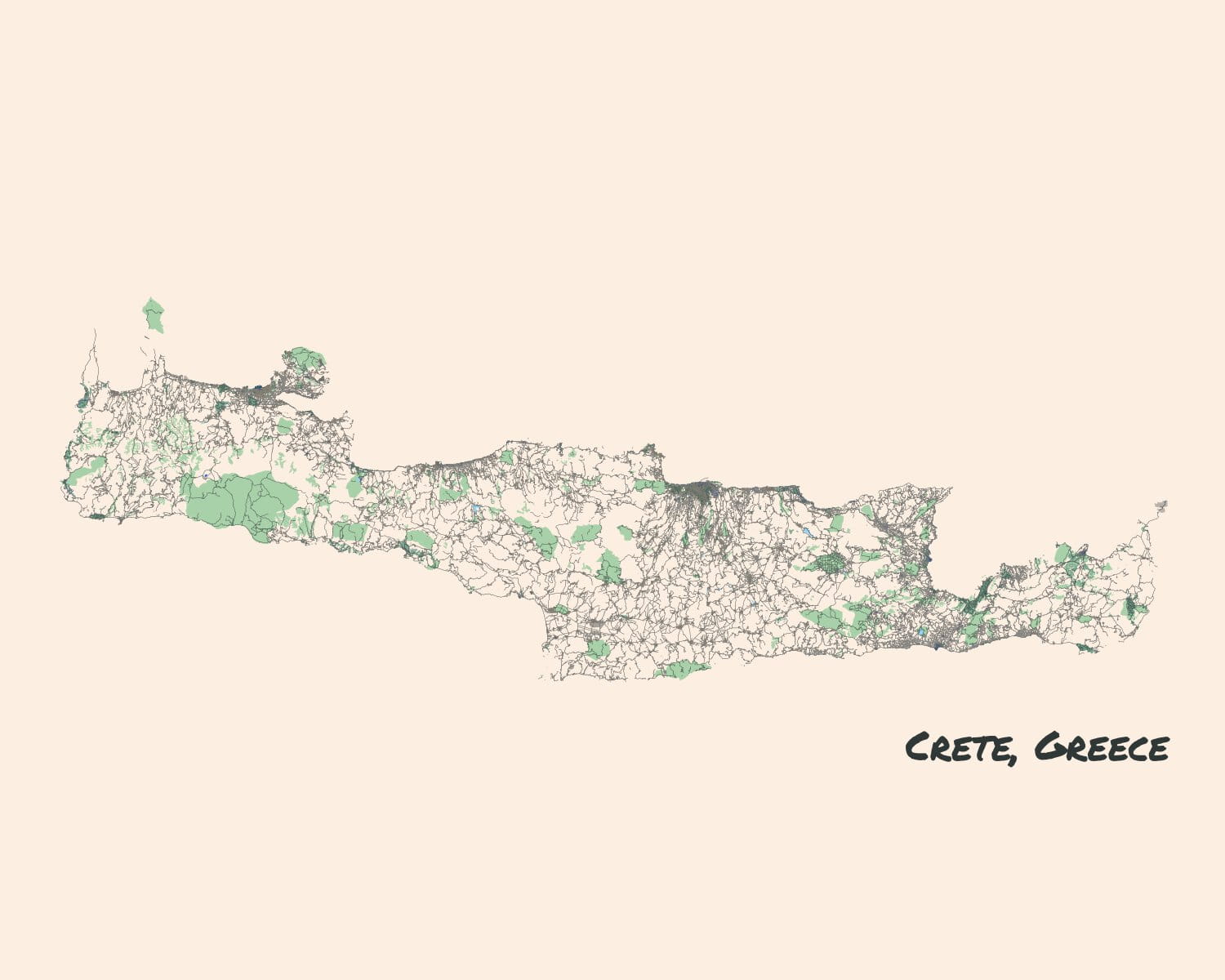 We visited Crete, the biggest Greek island, for one week.

After a brief stopover in Heraklion, we stayed in Chania and Rethymno, the 2nd and 3rd largest cities. These photos are of Chania.[1] 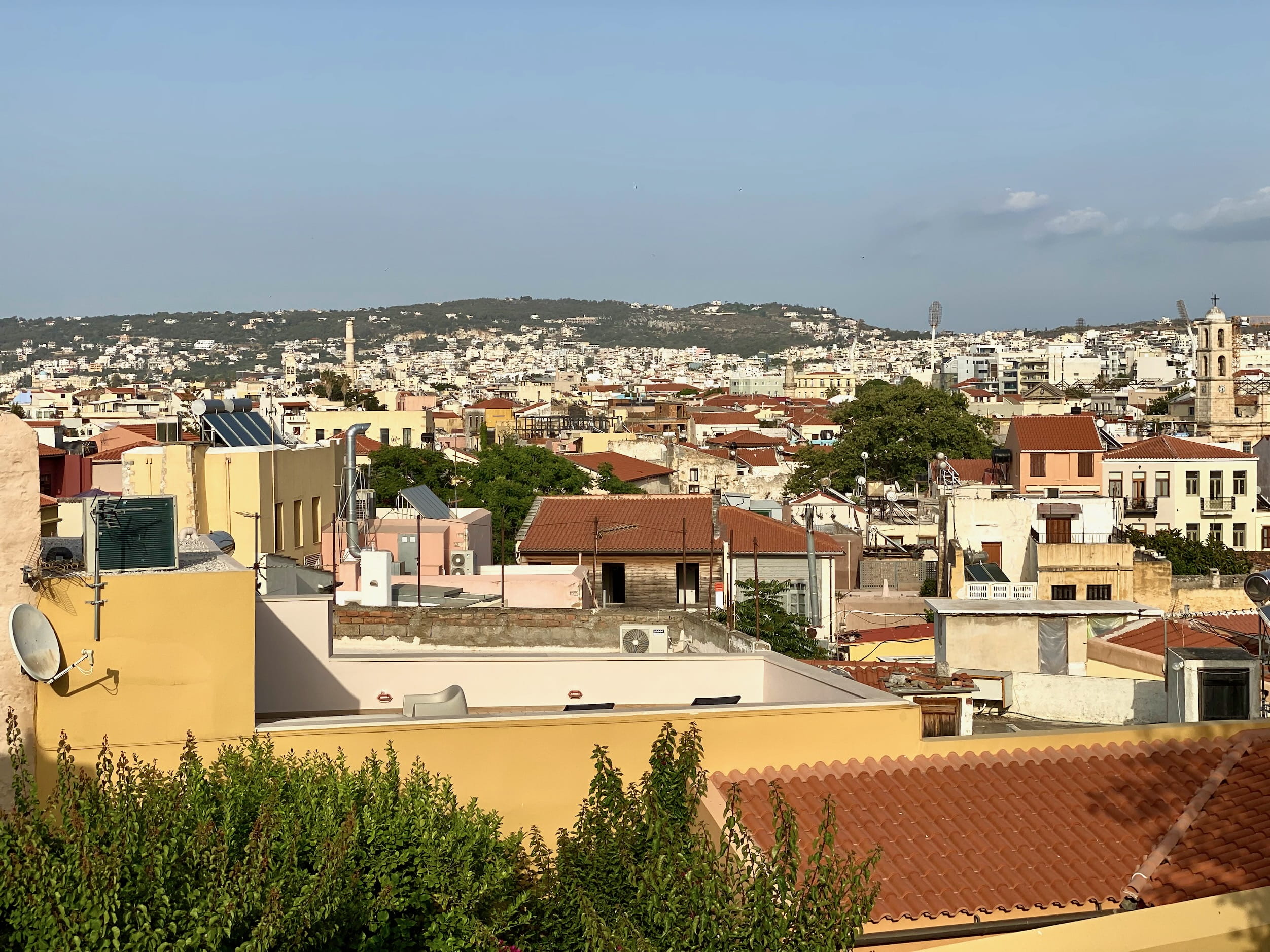 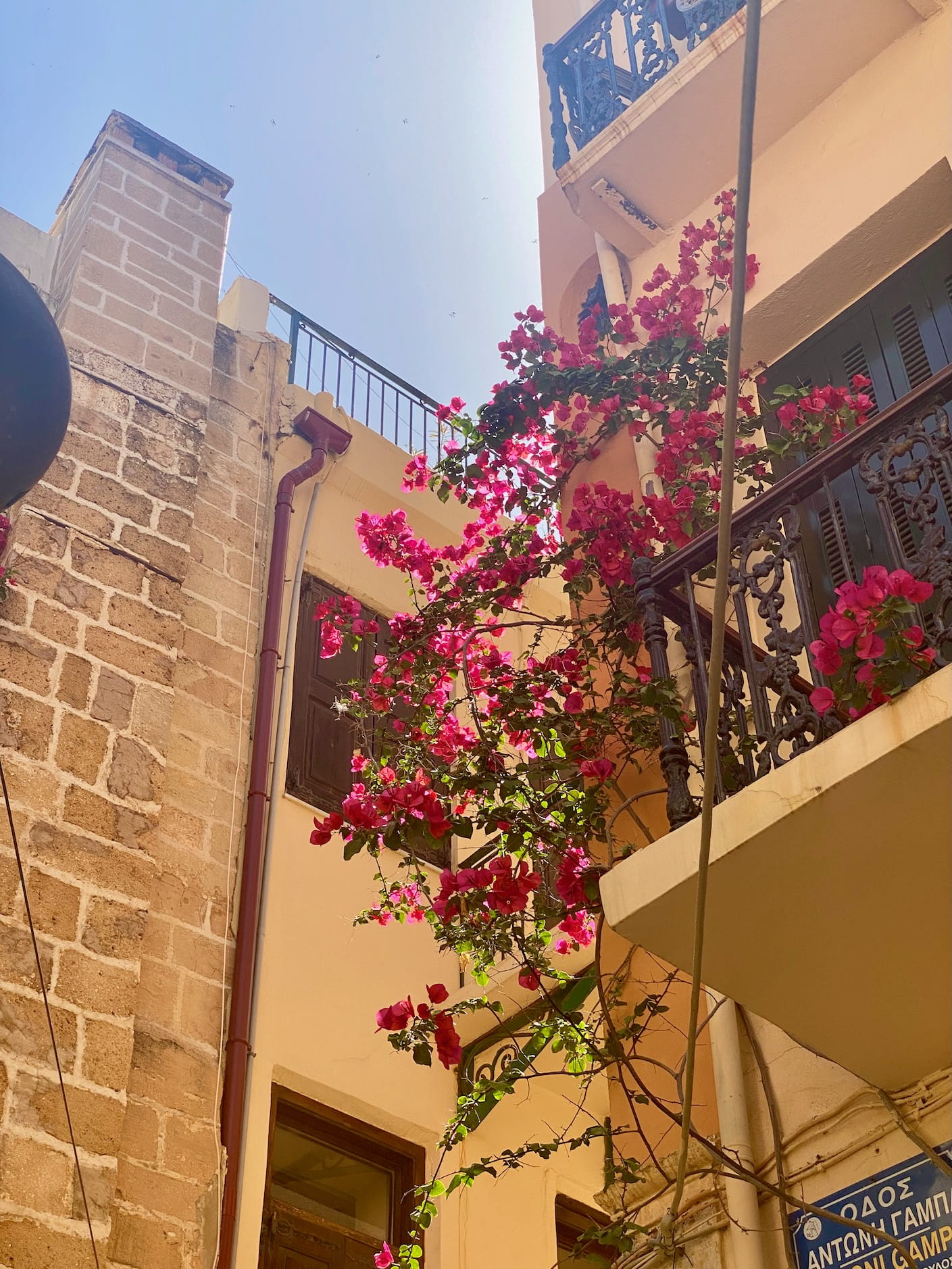 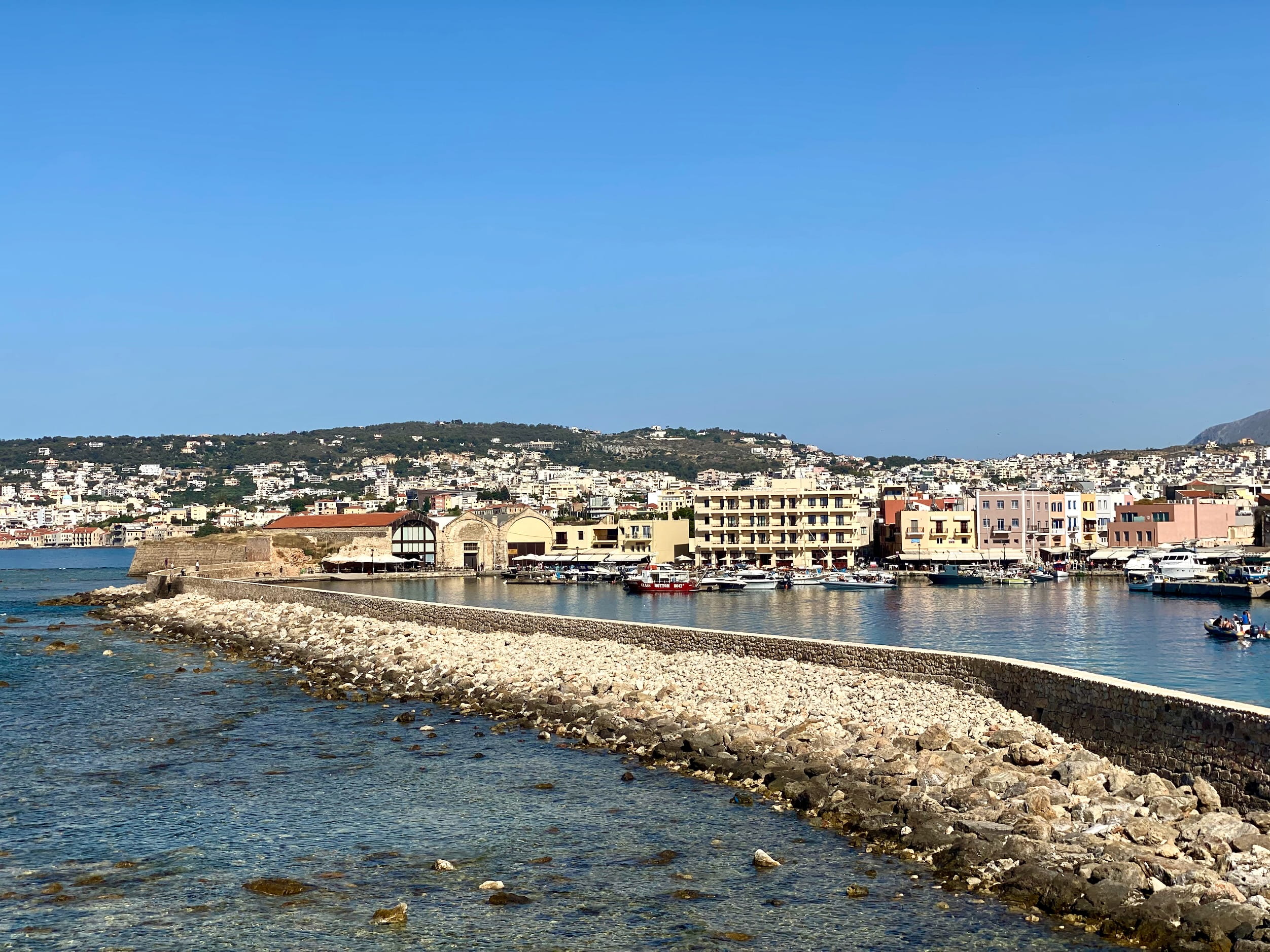 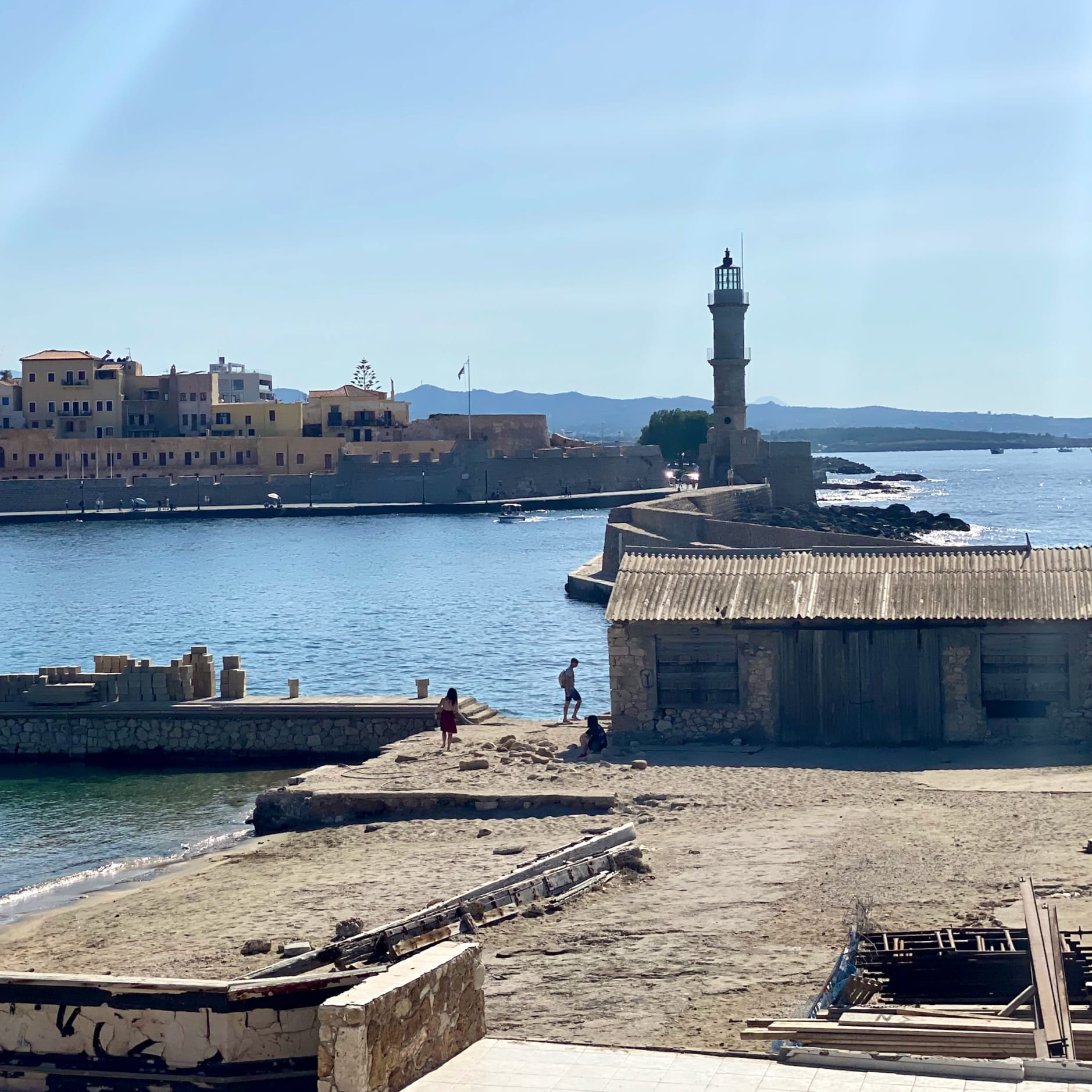 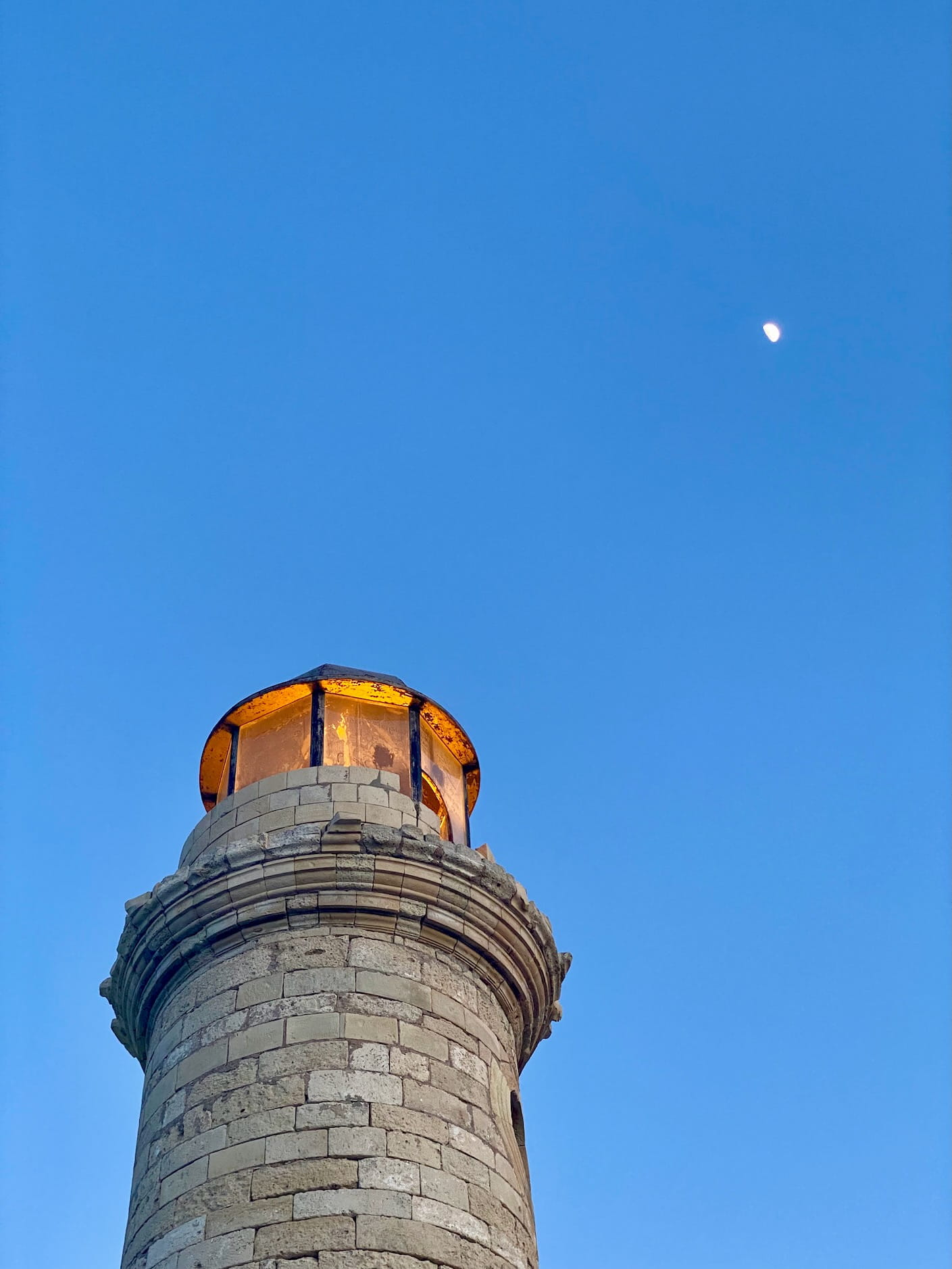 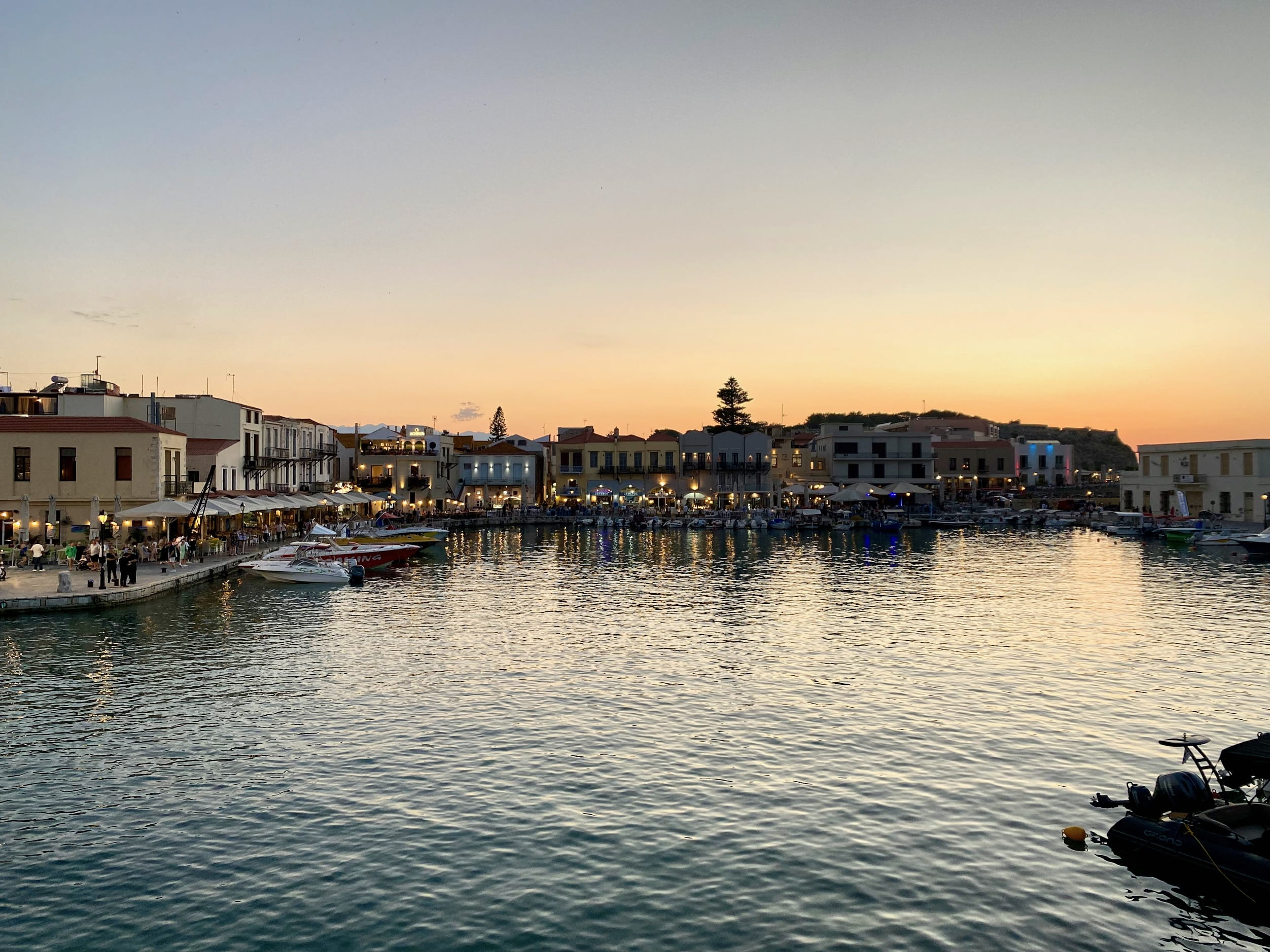 I knew very little about Greek food. I now know only slightly more. I don’t have pictures of our staples: souvlaki (meat skewers, which we usually had stuffed in pita) and big house salads. But I do have a couple photos of some other things. 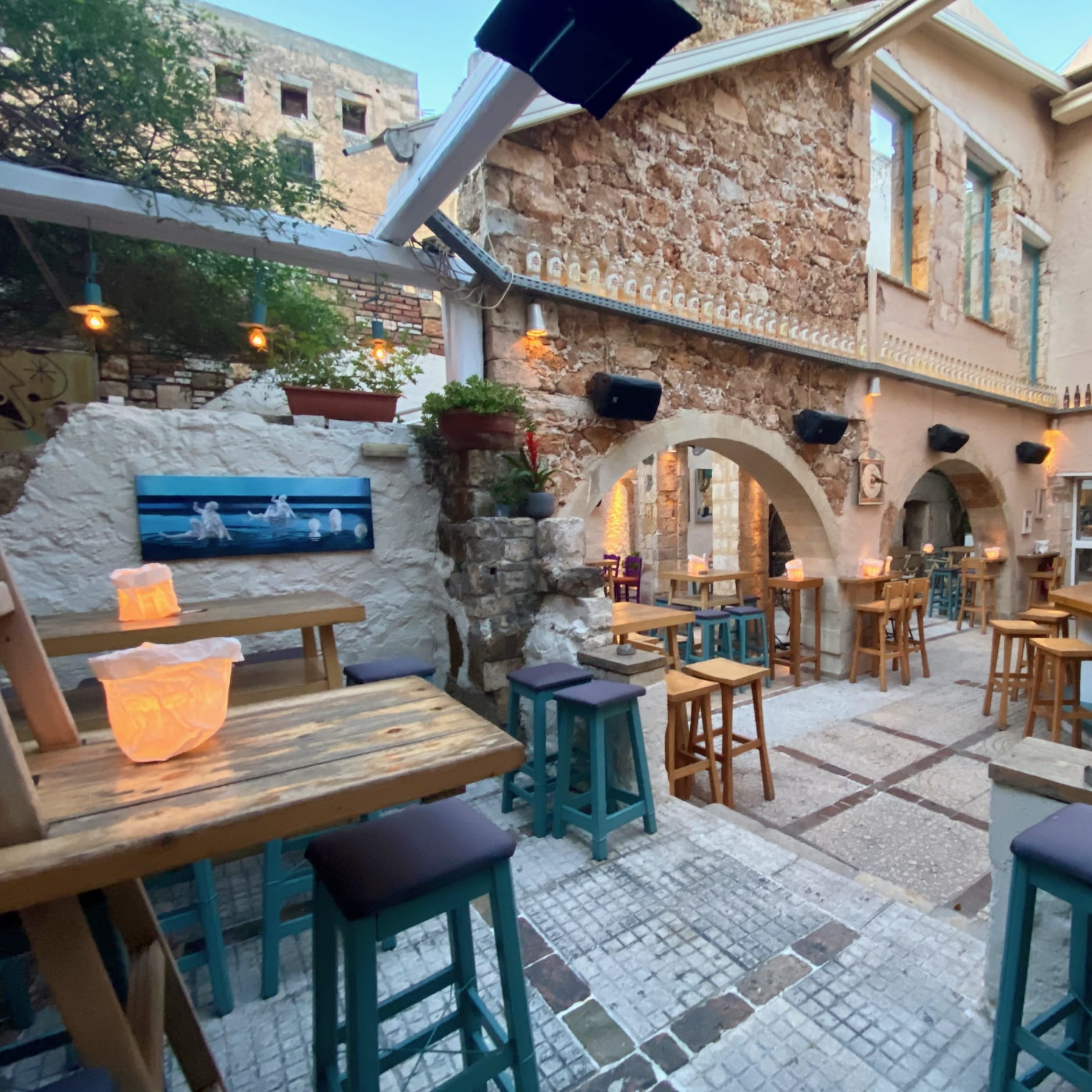 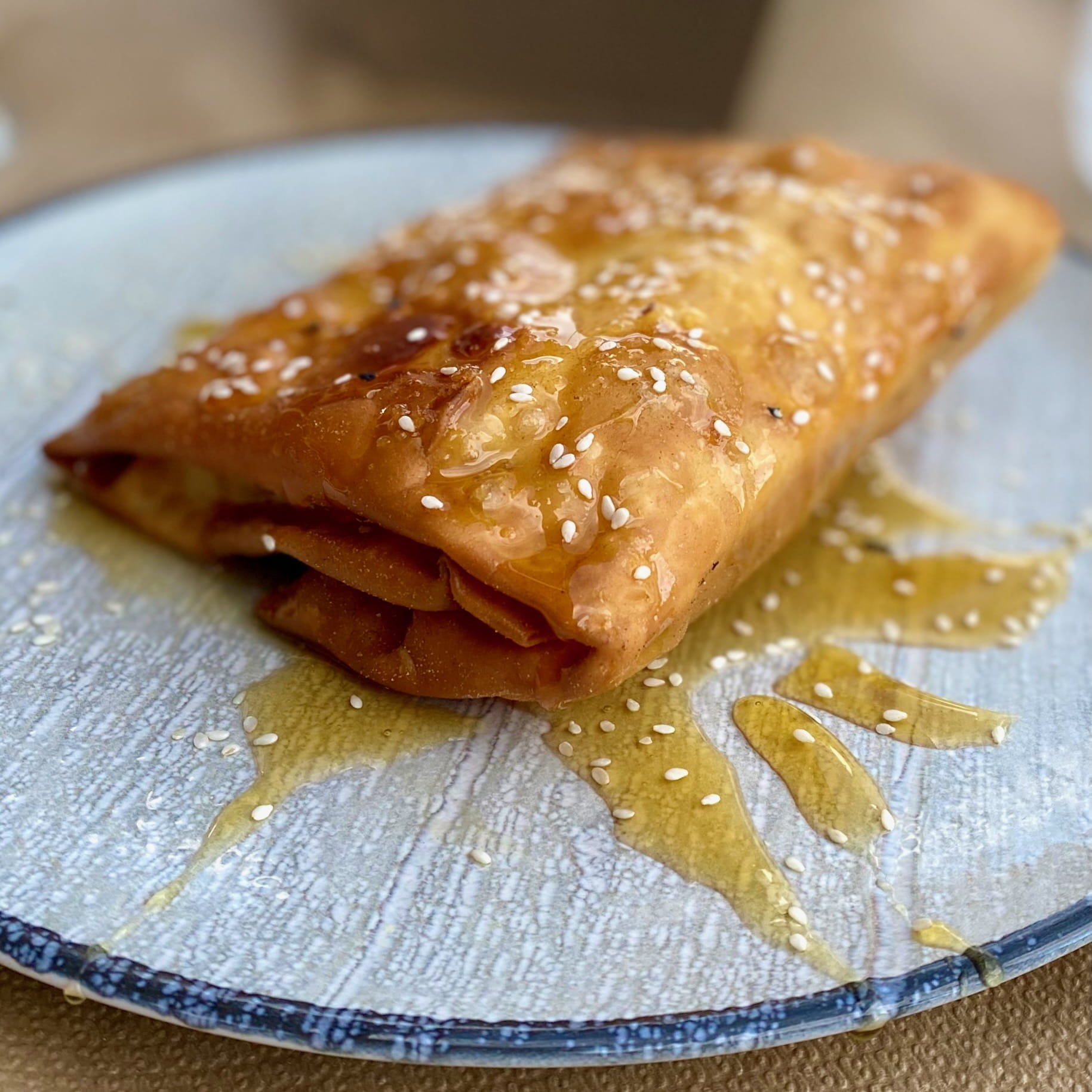 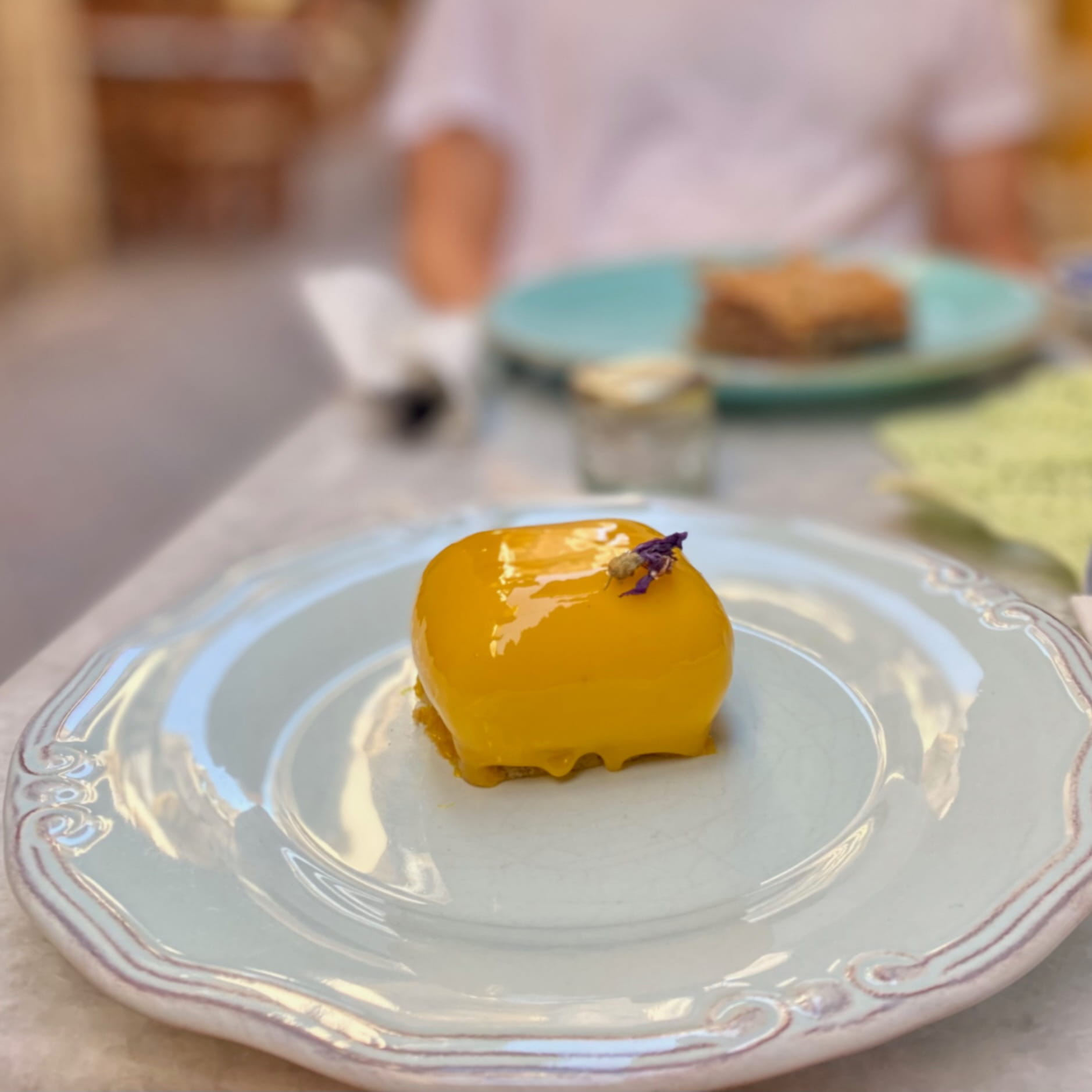 Top: Left: An old synagogue turned into a craft cocktail bar. Vaguely dystopian concept, but the cocktails were pretty good. Middle: Center: Feta encased in a thin dough and fried crisp, with honey and sesame seeds. Also consider: saganaki (not pictured), a big ol plate of fried cheese with a lemon squeeze. Bottom: Right: In insisting someone that hadn't tried baklava do so, I accidentally bought myself a delightful passion fruit treat.

The Samaria Gorge was the hardest walking downhill I have ever done.

We took an early bus to the entrance, where I bought a stupid Samaria Gorge branded baseball cap because I lost my normal one somewhere in Granada.[2] The plan was to walk downhill through the gorge, then end up at a beach, where we take a ferry to another town, and then hope to god there is a bus there to pick us up to head back to Chania (where we were staying).

(More on Crete busses in a minute.)

The plan did go exactly as planned, the only thing was it was 14 miles instead of 10 and 93℉ and mostly rocks. 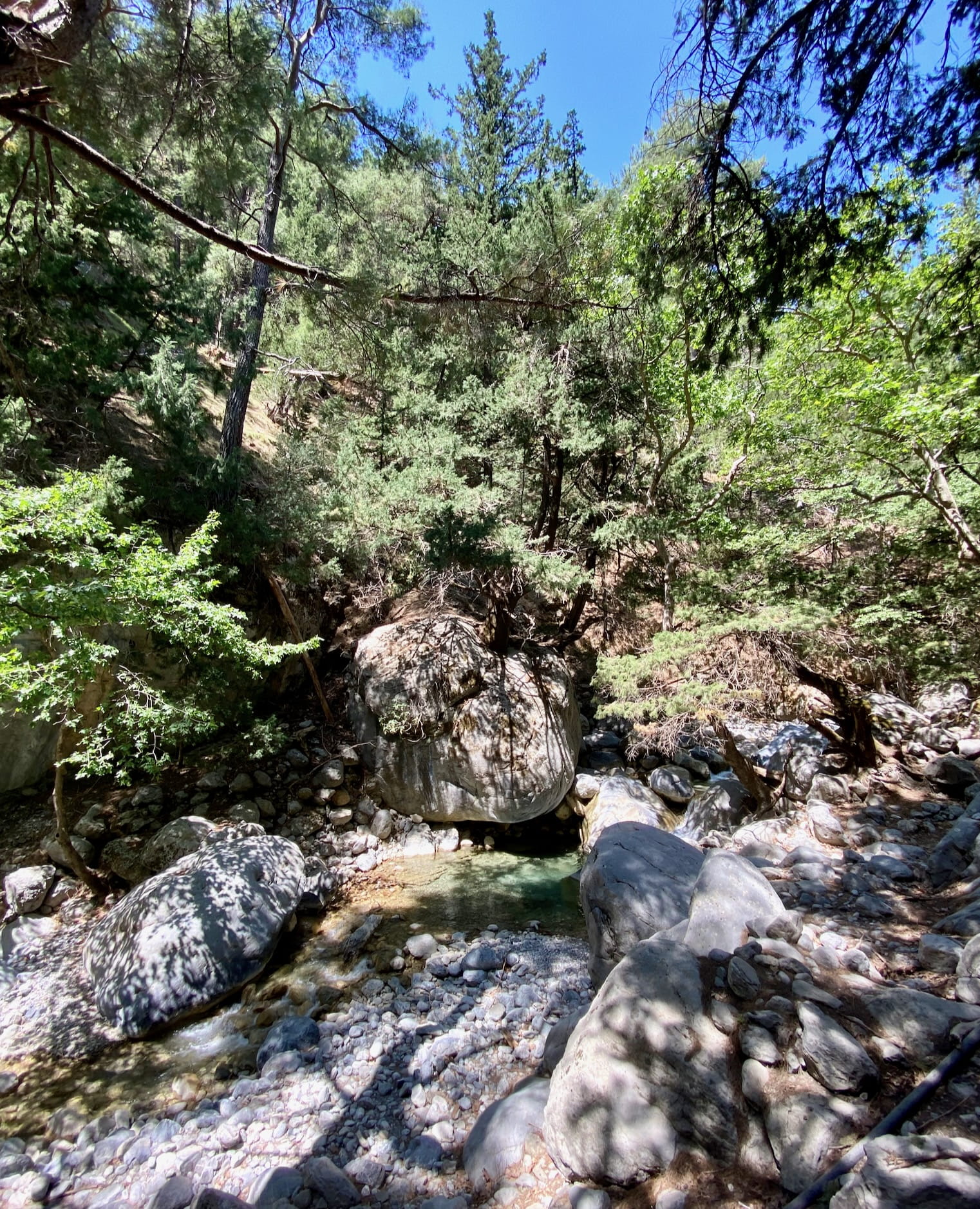 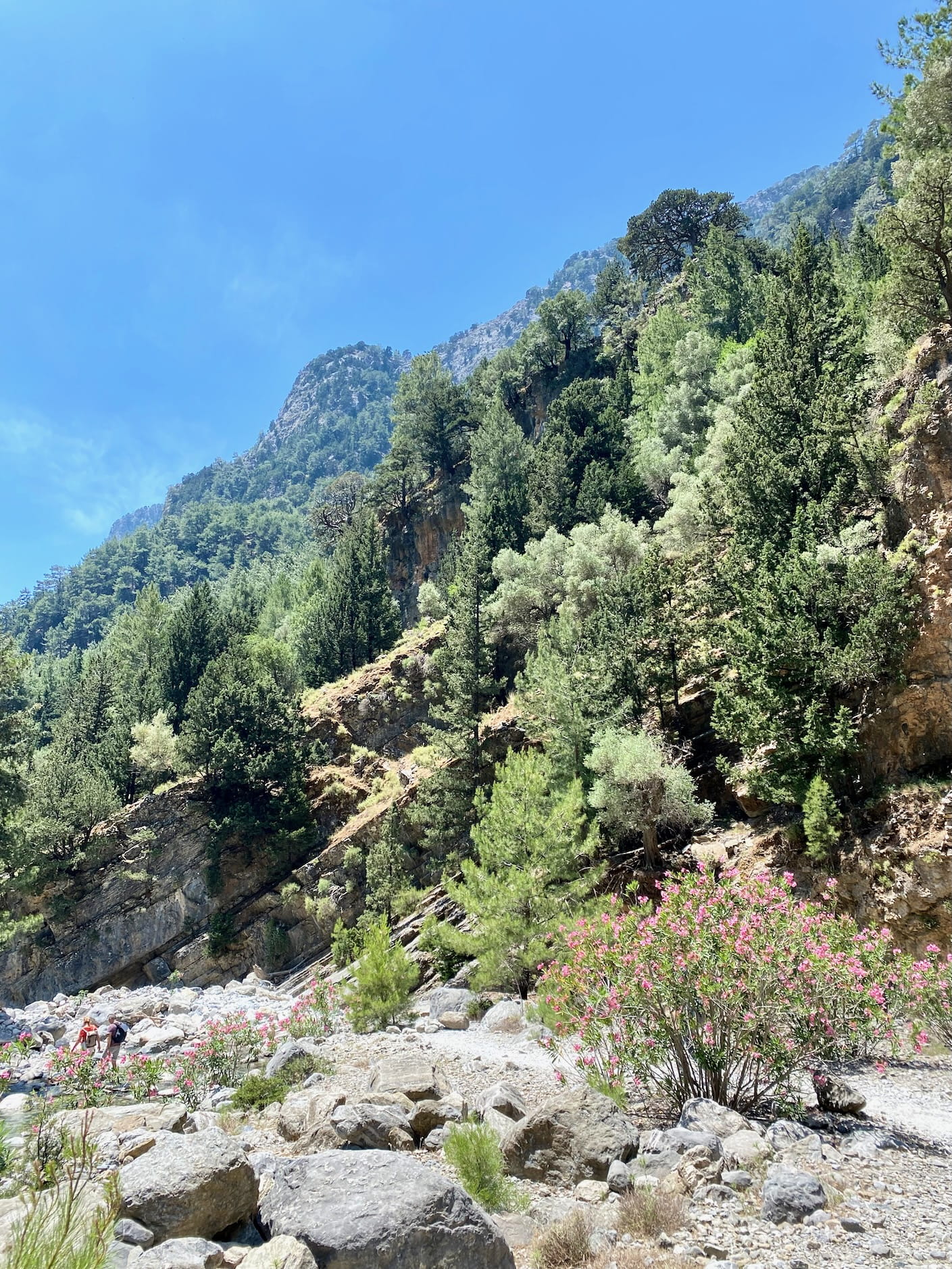 When you're walking through mile after mile of the same thing, when anything changes, you get really excited and start taking pictures. I have spared you most of these. I've begun to realize, though, that there is some value in having some general establishing shots. Just like, what did it look like, in general? Hiking here was an interesting mix of it feeling quite arid and rocky yet still supporting decent vegetation. This surprised me about Greece in general: it felt too hot and dry to be the source of Ancient Greece. How did they manage all that philosophizing?

Thought of a good meme caption for this one but leaving it to viewer's imagination. 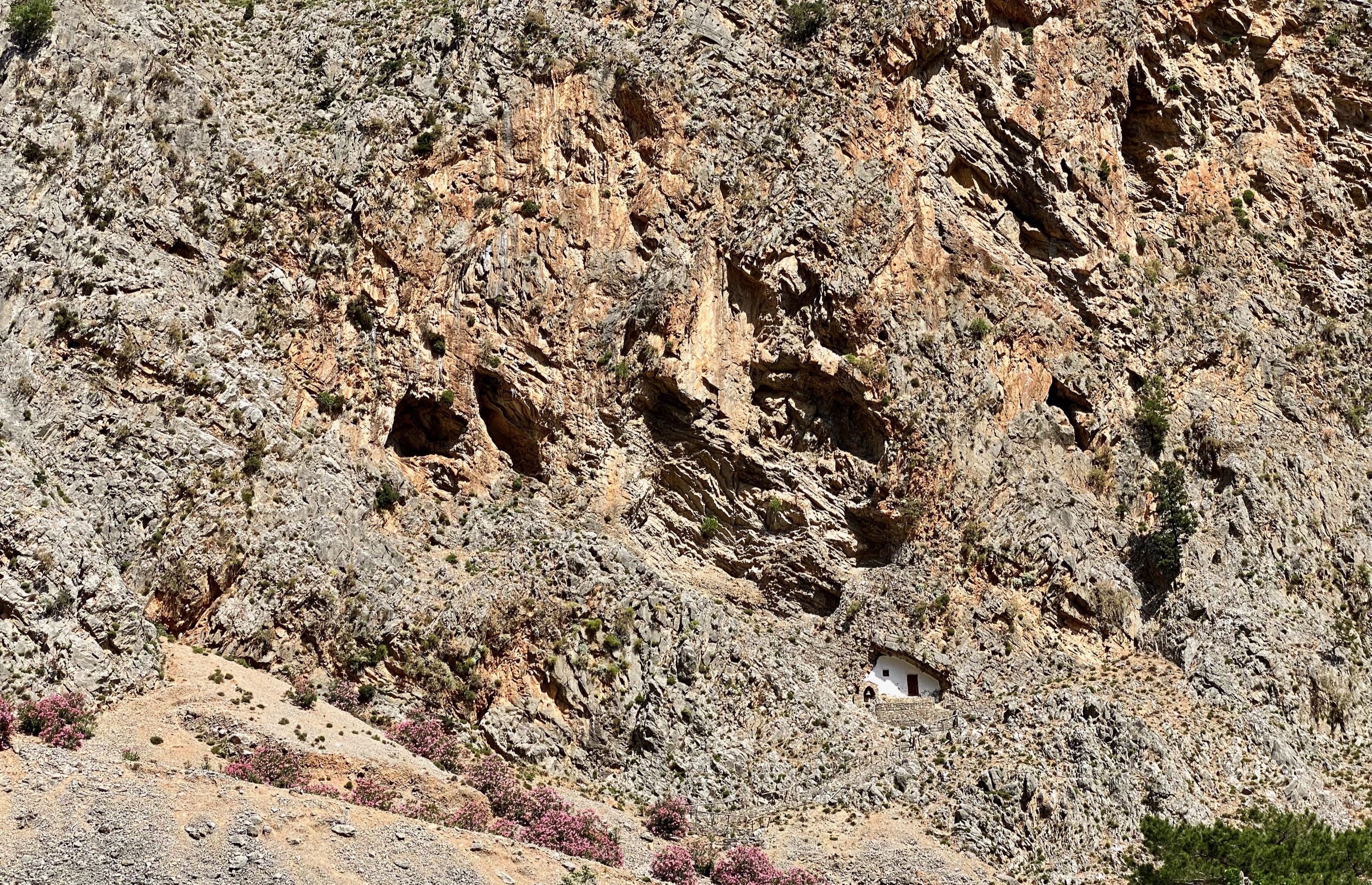 Info blurbs all excitedly advertise how narrow the canyon gets (only 10ft wide at some point IIRC).

What they don’t mention is, once you actually get there, signs everywhere read DANGER FALLING ROCKS HIKE FAST LOL. 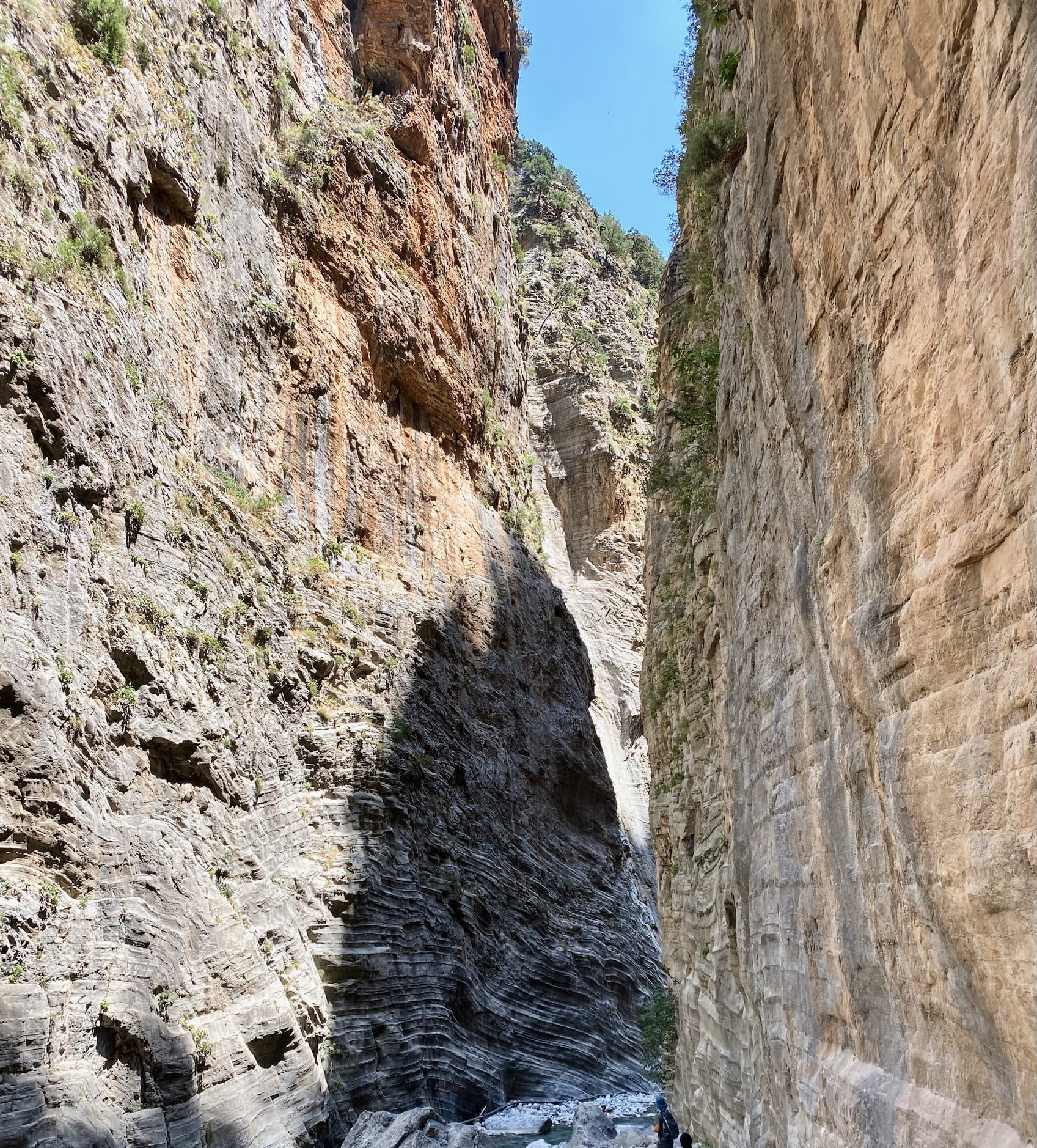 It was not bad but it was a challenge. Probably the hardest part was constantly being passed by elderly German hikers. I really thought I was a decently quick scrambler but these Deutche farts were flying. I reassured myself it was only because they were equipped with poles and very technical looking boots.

Actually, scratch that. The even more disheartening thing was to pass by people doing the entire hike in reverse (i.e., uphill). 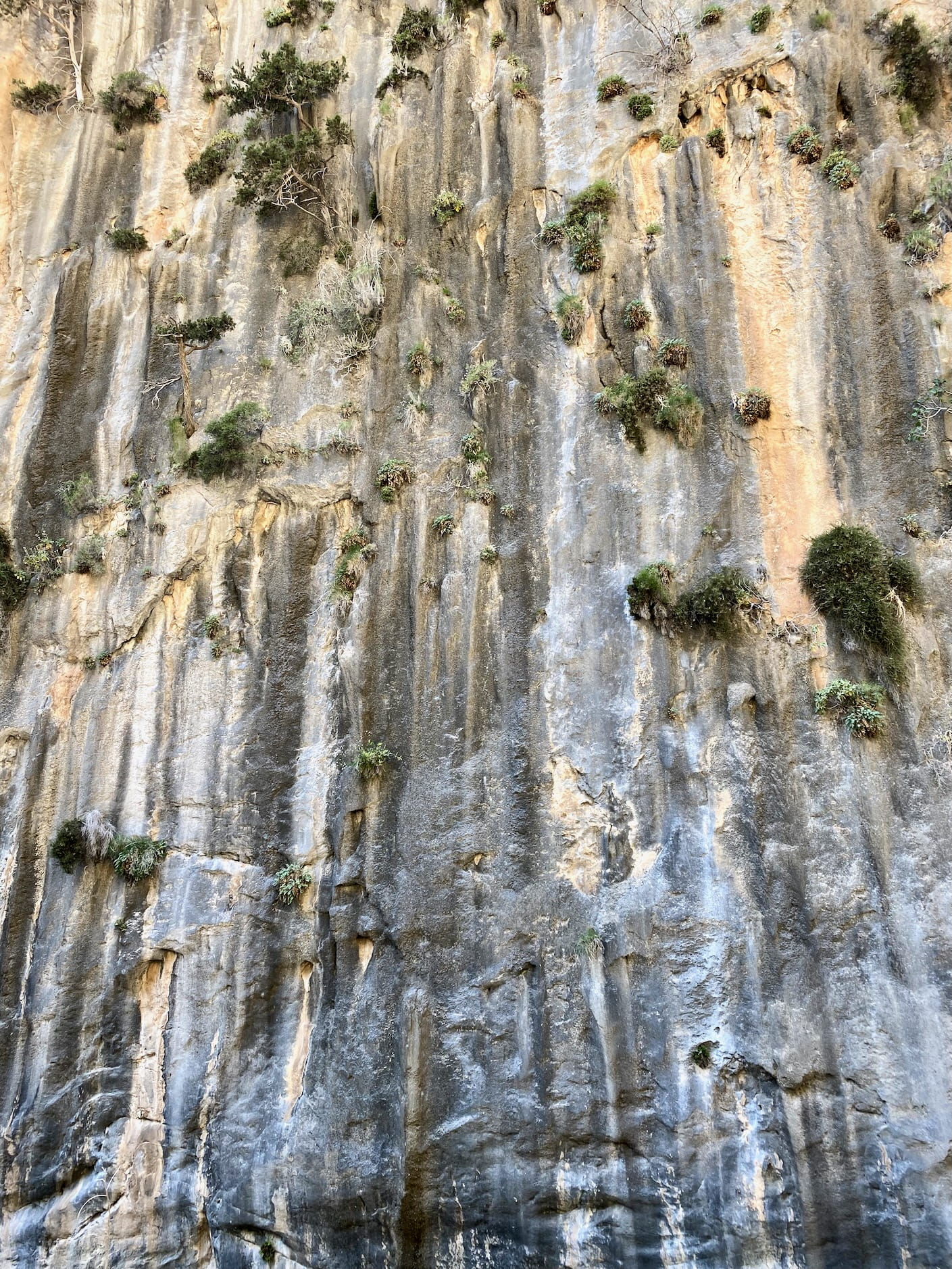 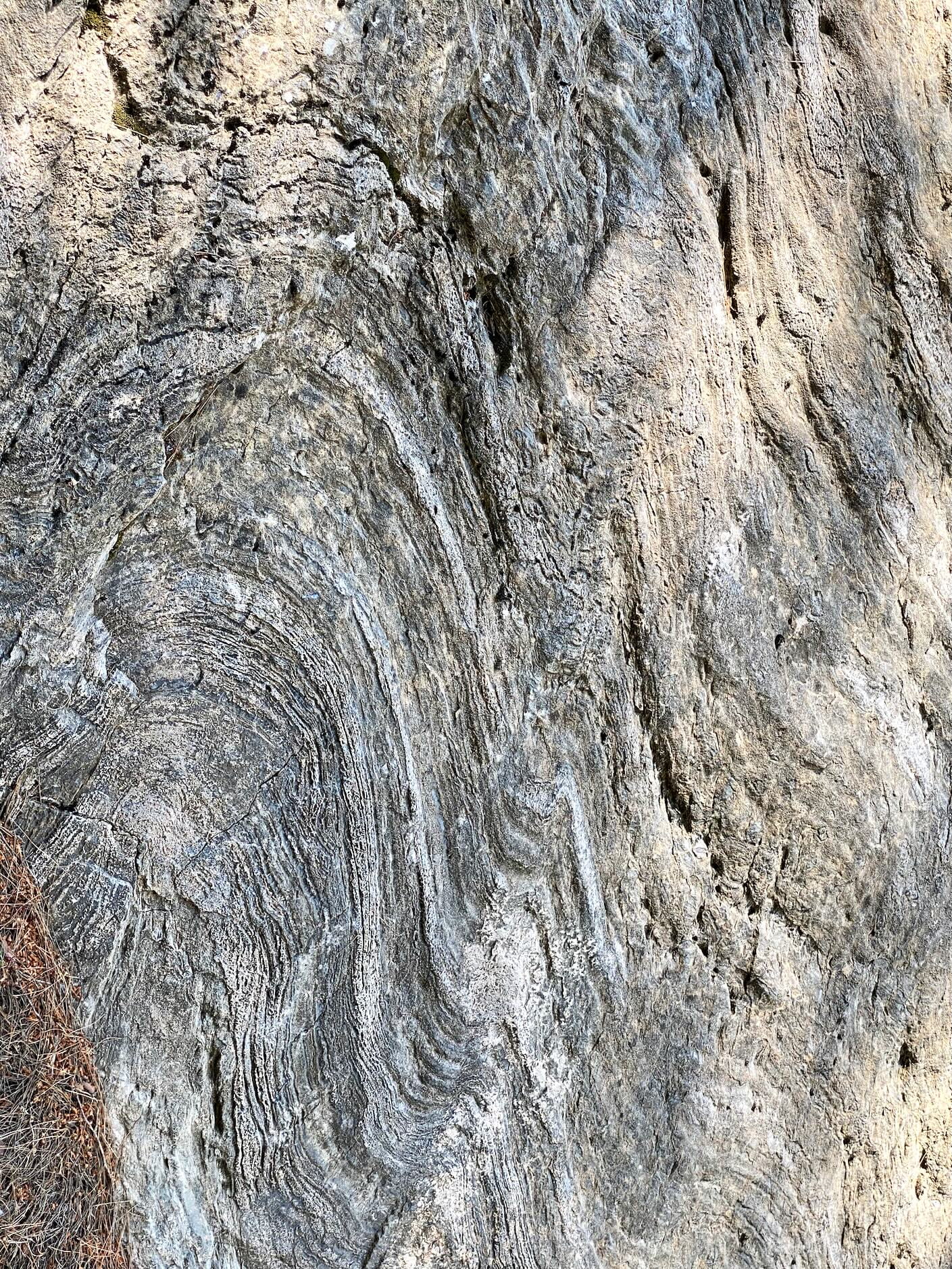 Just some nice textures for ya

Speaking of busses, it’s worth a brief interlude on Crete busses.

Permalink to “Interlude on Crete Busses” #

Planning your Cretan travels you will quickly discover that Google Maps knows nothing about Crete’s bus system. If you want to find out information you must visit the website for the Crete bus system. Just taking this step may already tickle your sense of adventure/dread.

Crete’s bus system website does offer some nice hike recommendations, but it also crashed our computers every time we tried to actually check the schedule.

So we arrived at Crete with a mixture of general optimism and some healthy fear that the busses were entirely a myth, had been decommissioned, etc.

What we discovered was that the busses were completely functional and generally delightful. The bus stations got us tickets without issue, and if you hung around and listened and watched, sure enough, your bus would dutifully roll up when it was scheduled. The chaos factor was still above a 0 (e.g., busses frequently didn’t have the label of where they were going; this is easily solved by wandering around shouting the name of your destination at people who look vaguely official until someone points you at a bus), but we generally had a great time blasting around sandy cliffside roundabouts in a huge air conditioned coach. (Except that one time the AC was leaking onto Julie in the back.)

Permalink to “Don’t Forget The Water” #

Again, I must stress the Mediterranean is beautiful and clear and turquoise and salty. We swam a lot.

It’s the kind of swimming where you’re like “I’d better burn this into my brain so I can recall it vividly during some imaginary future domestic hellscape—e.g., screaming children and unpleasant logistics and work drama.”

Of course this is fruitless so hey just have a nice swim. 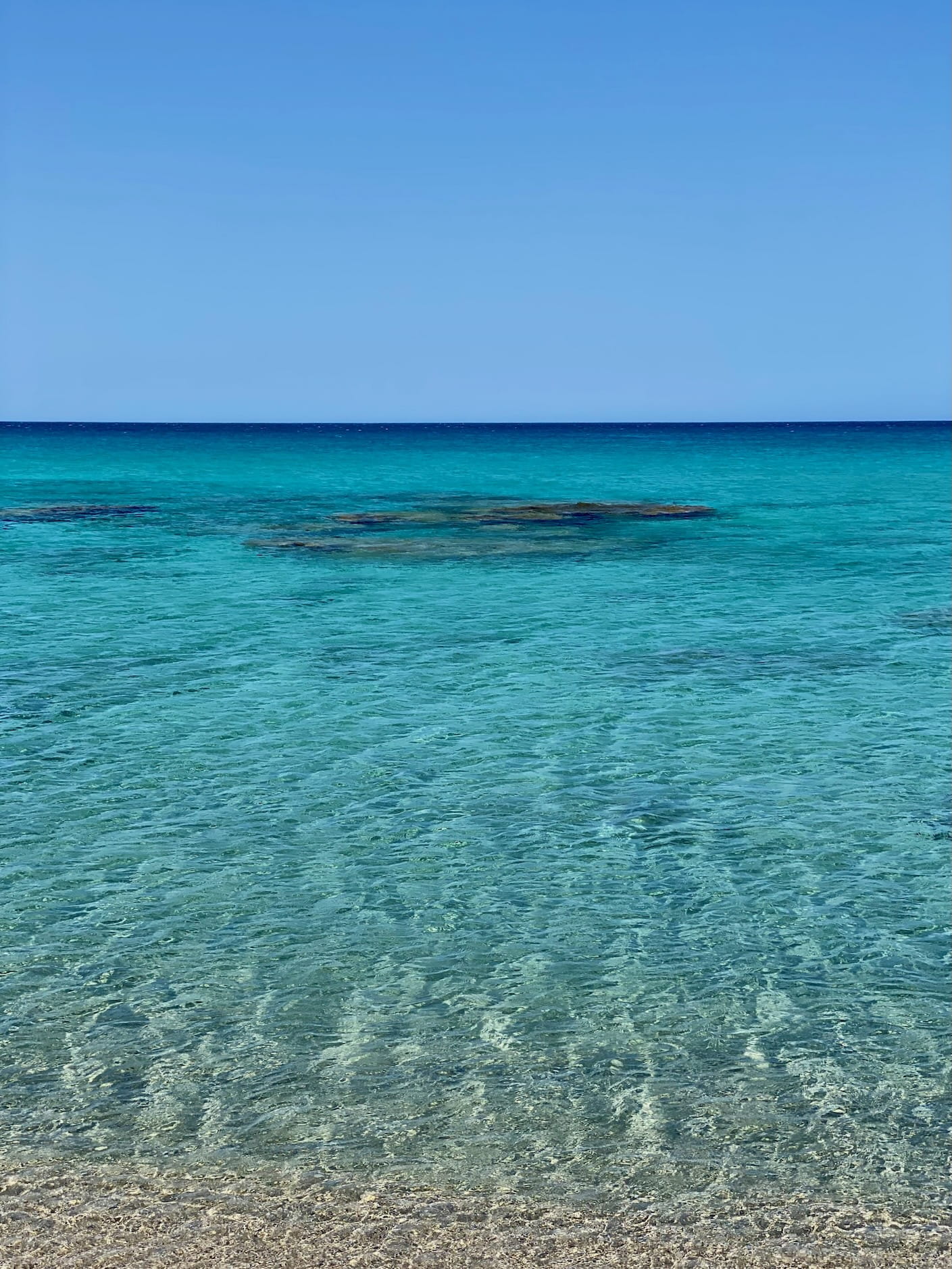 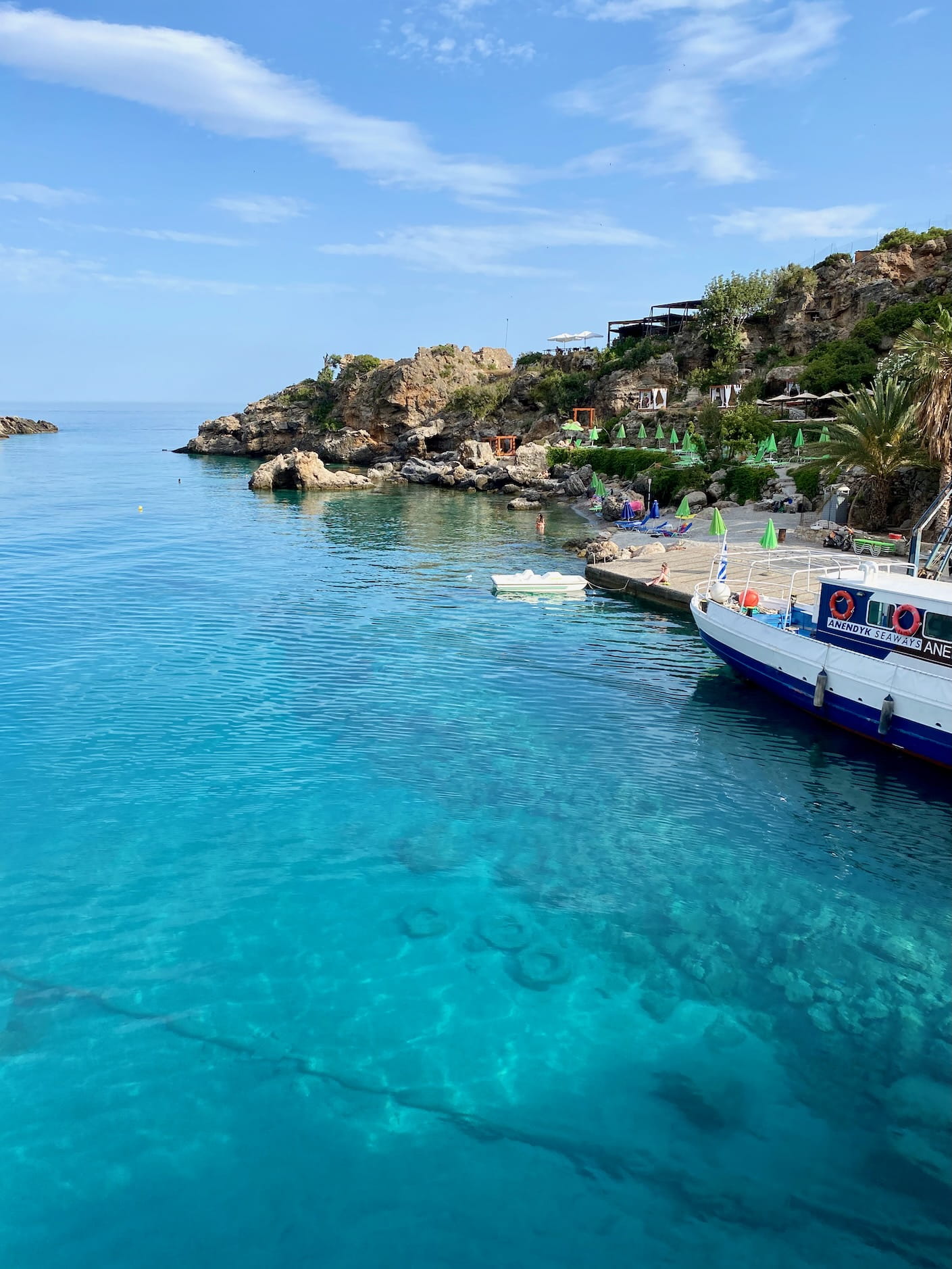 I have been freshly confused about where exactly the Mediterranean Sea extends to because Google Maps carefully points out many other seas around/inside it. E.g., there's the Sea of Crete as well as the Ionian and Aegean, and even further the Adriatic and Tyrrhenian etc. It turns out these are just "subseas," so to speak, of the Mediterranean, technically called "Marginal Seas." So the good news tl;dr: is we can keep on calling the whole thing the Mediterranean.