Building an ECS in TypeScript series

Building an ECS in TypeScript

A while into development, my co-developer Cooper made a level with a ton of objects. Specifically, crates.[1]

A similar level in the finished game. That's a lotta crates.

Even though they sound like boring dumb wooden boxes, crates are interesting because they actually have a lot of functionality. Two relevant things crates support:

As game objects, these properties made crates pretty “heavy,” by which I mean they had several Components on them, and several expensive Systems were running code on them.

So what happened with this room full of crates?

The symptom was obvious: you’d enter the level, and your frame rate would drop.

The only thing different about the level was the proliferation of crates, so we figured out pretty quickly that the crates were causing the slowdown. Delete the crates, and the frame rate would be fine.

Intuitively, the problem felt fixable, because the crates aren’t actually doing anything most of the time. So if a bunch of these unmoving objects are causing the engine to chug, it’s probably a sign of inefficiencies we can iron out in the engine code.

Fortunately, I had my wits about me. Rather than blindly rushing in and optimizing, I implemented a profiling system that would let us see what was taking so long in Cooper’s Crate-topia. 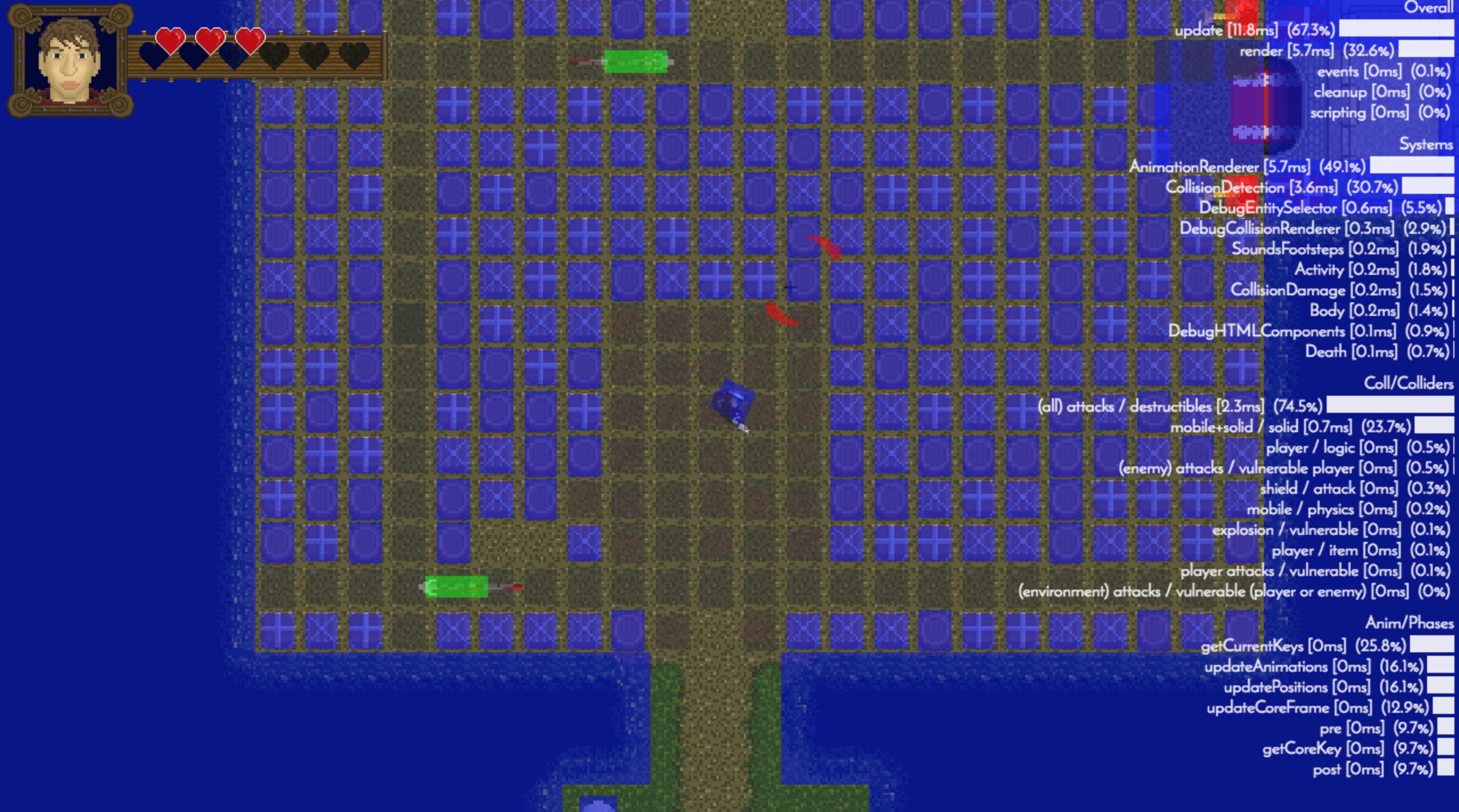 Our profiling (white bars and text) rendering on top of the game's debug view.

The timings are on the right side of picture. If you look at the Overall section (top), you can see we’ve split our game loop into two parts that take all the time:

This totals 17.5 ms, which is greater than the 16.6 ms you need to hit to achieve 60 FPS. And the situation was worse on older computers.

Getting the render faster involved better using our rendering library (the awesome PixiJS). I won’t go into detail here—if you’re curious, check out this footnote[2]—but suffice to say, we’ll be focusing on the update (game logic).

Breaking the update down into Systems (block second from top), the AnimationRenderer and CollisionDetection Systems were the culprits. Fixing these involved many modifications to the game: implementing spatial hashing, reorganizing the collision sets that are run, optimizing a few other Systems, and implementing the dirty Component optimization feature.

An opt-in feature where Components can track whether their state has changed, and Systems can choose not to update them if it hasn’t.

It was important to me to make this feature opt-in, because I didn’t want to have to change all of the game’s Components and Systems to support it—especially the ones that were running just fine.

Let’s walk through each of these changes in their own section.

Permalink to “Dirtying the Component” #

Remember that our Component class has been about as minimal as possible so far:

To start things off, I added two things to the base Component class:

Our new Component implementation for the dirty Component optimization.

You might ask, “why have two methods when we only need one?” And to that, I say, whoops, I think I over-engineered this one. I thought I might (a) want to override the implementation of dirty() in a specific Component to do more stuff, or (b) want to add more code in the dirty() of this base Component class. But I probably should have followed the YAGNI (you ain’t gonna need it) rule, and just crossed that bridge when the need arose.

Here are a few examples of dirty Components in action:

A snippet of the CollisionShape Component, which holds data about a polygon that participates in collision detection.

The properties of a CollisionShape never change once it is created. This was an invariant that worked for our game, because we didn’t have any objects that changed shape. As such, the only time a CollisionShape’s data meaningfully changed was when it was disabled.

You may immediately be wondering, but wait, what about its position? Doesn’t the position have, uh, a huge effect on whether a collision shape will collide with something?

The answer is: yes, absolutely, but remember that we’re doing an ECS. An entity’s position lives in its own Component, which can track whether it is dirty on its own.

Speaking of the Position Component, let’s look at how it manages its dirty state.

First, as a quick throwback, you may notice two techniques that we covered in our Component deep-dive:

But on to the main logic: if the (x, y) coordinate or angle changes, the Component becomes dirty. We’ve internally routed all our (x, y) changes through the setP() method, so we only check for changes and call dirty() there.[3]

Permalink to “Dirtying the System” #

I’ll show the System changes next because it’s simpler than the ECS. You’ll see how the Systems will receive dirty Component information.

If you recall our System implementation from before, it’s pretty minimal: just the set of required Components, the update() function that gets called every frame, and a reference to the ECS so it can actually do anything.

We will make two changes here:

The new System base class that supports dirty Component optimization. Note how both additions can be ignored for Systems that don't wish to support it.

You may be wondering why we made the design decision mentioned in the comment on dirtyComponents: “Components here need not be tracked by componentsRequired.” I’ll show why with an example.

Check out the componentsRequired and dirtyComponents from the AnimationRenderer System, a huge System in charge of rendering everything that has an animation:

The AnimationRenderer System is interested in a much larger set of dirty Components than it selects for in its update.

The componentsRequired says: anything that has a Position and is Animatable, I want to know about it so I can render it.

But the dirtyComponents says: changes to any of these Components mean I’ll need to re-render the Entity.

In practice, this means that anything that is currently animating—like a player or enemy moving around—is still going to be dirty, and hence updated, every frame. But something that is just sitting still, like a crate, won’t be dirty.

Backing up a bit, you might notice this is caching at a relatively high level. Rather than trying to optimize within a System by seeing whether we can be lazy about how we modify state—which I would call low level—we’re trying to optimize what the System updates in the first place. If we decide an Entity is dirty, we just run the full, normal update on it. Both types of optimization have their place. I like this one because it’s a mechanism that can apply to any System.

Important aside: A way to reduce bugs and retain your sanity is to keep implementing your Systems such that they behave correctly, just perhaps slowly, if they update every Entity every frame. The changes to a System for dirty Component optimization should alter performance, but not correctness. In other words, avoid update logic relying on only a subset of Entities to be updated every frame in order to be correct.

Permalink to “Dirtying the ECS” #

We now have to make sure our ECS tracks dirty Components (which have called signal()) and keeps up-to-date lists of those Entities for participating Systems (who have defined dirtyComponents).

To pull this off, we have to be a bit careful.

Permalink to “A Buggy First Draft” #

In other words, at the beginning of each frame, no Components are dirty, so no Entities are considered dirty by any System. Then, as Systems run, Components become dirty. We pass each System the set of currently dirty Entities (based on the System’s dirtyComponents. Then, at the end of the frame, we say that all Entities and Components are are clean.

Can you spot the bug?

The problem happens if System A runs before System B. Imagine the following frame:

Permalink to “Fixed: Clear After Update” #

To prevent this, we can instead make the following rule: each System’s list of dirty Entities is only cleared after it actually runs.[4]

With that implementation, the above scenario would now play out:

System A was able to update its dirty Entity on the next frame. (This is the earliest it could have found out about System B’s changes anyway, since System A runs before System B each frame.[5])

Permalink to “The Implementation” #

OK, let’s make those changes to our ECS to support dirty Component optimization.

In the upcoming code block, I’ll show just the parts of the ECS that have changed. Afterwards, I’ll link to a complete listing of the code so far.

Code changes to our ECS to support dirty Component optimization.

Note: Adding Systems during gamplay. In Fallgate, I never added Systems later on during the game. They were all added upfront, before any Entities or Components were made. If you wanted to add Systems dynamically during gameplay, and wanted dirty Component optimization to work correctly for them, you’d need to also make sure the System runs once on all of its matching Entities. Otherwise, it would miss everything that already exists. You might do this, for example, by marking all Entities that match a System as dirty whenever a System is added. Later, we’ll make an onAdd() function for when an Entity is first tracked by a System; you could do it there.

Here’s the complete code listing for the ECS with dirty Component optimization.

Permalink to “Trying it out” #

I’ve made a tiny demo to show the dirty Component optimization at work.

We’ll start with our basic Health Component, as before, but add in dirty() reporting whenever it changes:

The Health Component stores two numbers, but calls dirty() whenever either changes. There's probably a more elegant way to do this in TypeScript 😅

We’ll make a LatestHealthLogger System that logs the latest value of an Entity’s Health Component.

Notice that the LatestHealthLogger ignores its full set of entities and only iterates over the dirty ones!

Now, we can run a little function to test it out.

Sure enough, when I run this, I see:

If we change the LatestHealthLogger to iterate over all entities, rather than just dirty, it prints:

Epilogue: What Happened with the Crates?

Permalink to “Epilogue: What Happened with the Crates?” #

After the dirty Component optimization—and some other improvements to collision detection, which I might cover elsewhere—we brought the update time for each frame from 11.8ms down to 1.4ms. The game now ran buttery smooth. 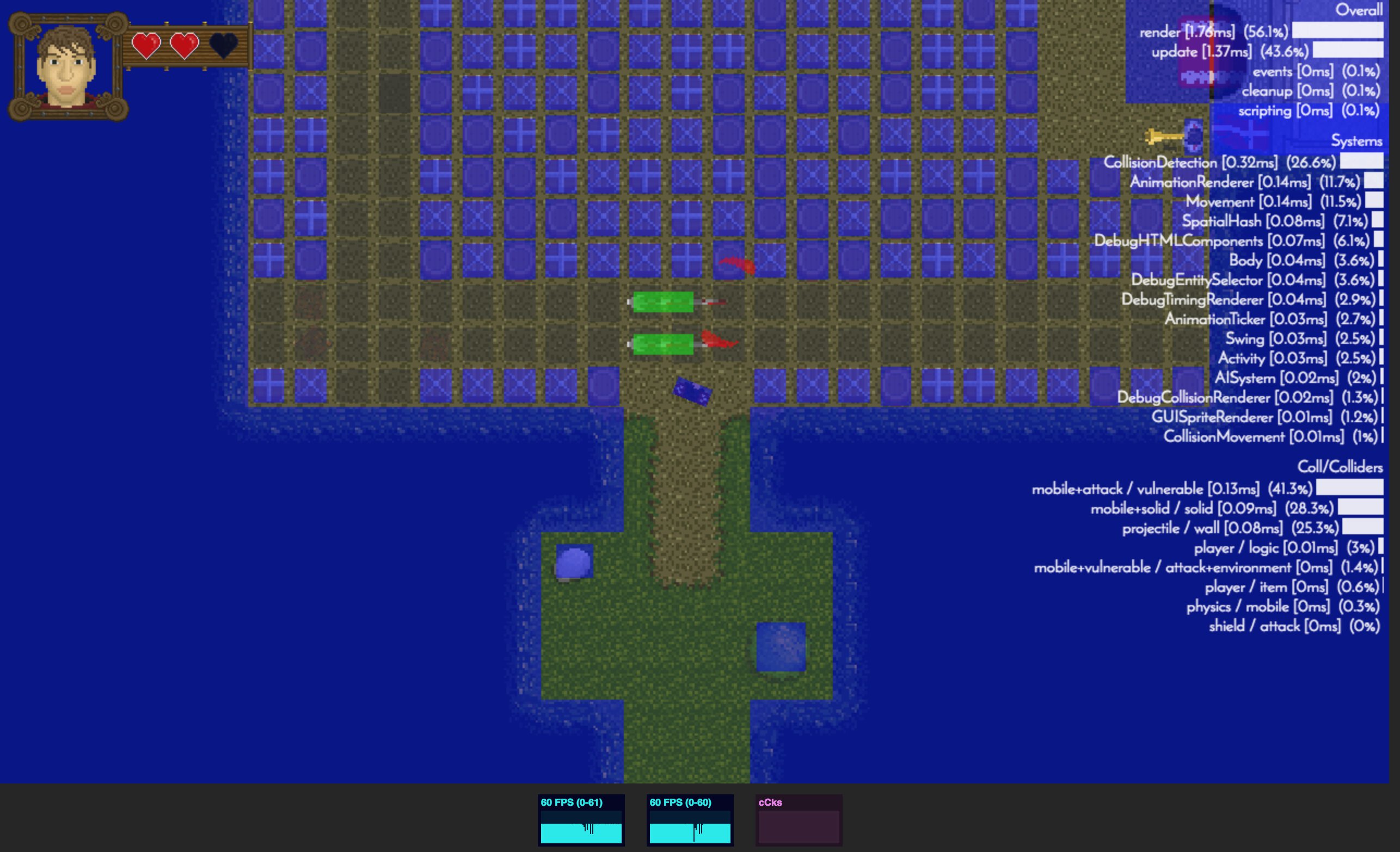 Building an ECS in TypeScript series