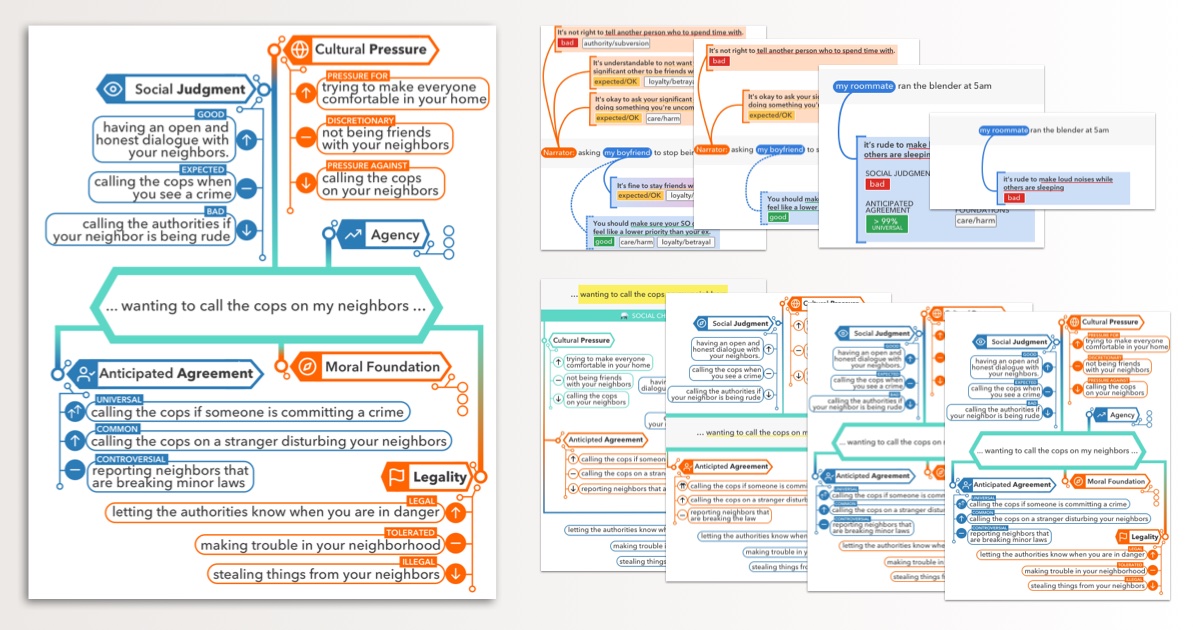 One of the things I think our lab[1] does well is that we put a lot of time into each “Figure 1” for our papers. It’s not uncommon for us to go through ten or even twenty revisions of this figure.

What is Figure 1? It’s what we call the figure that appears on the first page of a paper. Due to the software we use to write papers, this figure always gets automatically labeled “Figure 1,” hence the name. 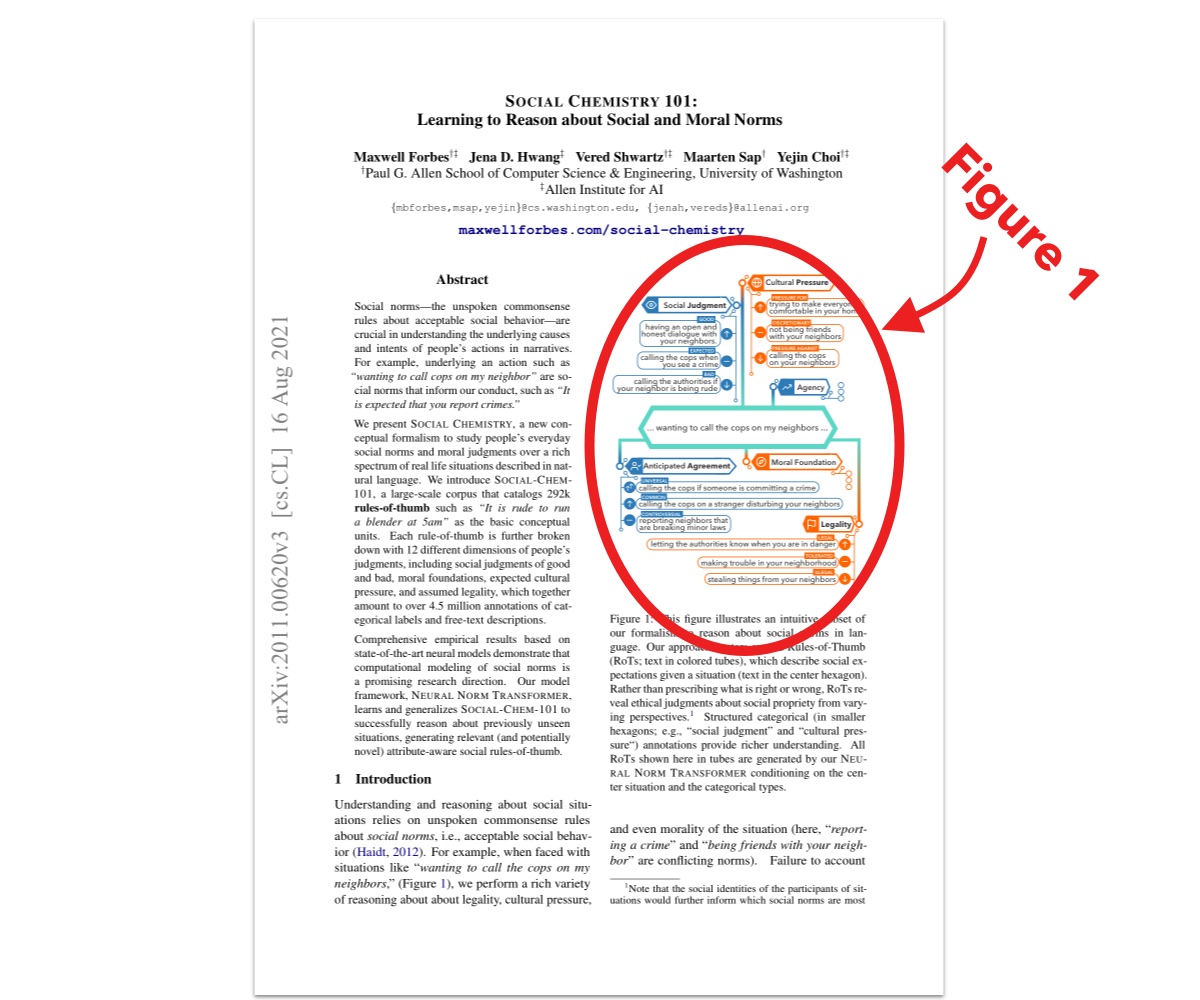 Figure 1 is important because:

As a reader, I love seeing a Figure 1 because it often answers the question, “what did this paper actually do?” You can sometimes figure this out from the abstract and intro, but more often than not, what the paper literally accomplishes is somewhat buried behind pontificating and ambitious framing. A clear Figure 1 is a welcome shortcut to getting the “what’s the input and what’s the output?” view of the work.

Permalink to “This Tutorial” #

Because I’d like to see more people make Figure 1s, I figured (hehe) it’d be fun to share an example of my process making a Figure 1.

The Figure 1 I’m sharing here is for a paper I worked on called Social Chemistry 101.

Shameless plug: if you’re interested in reading the Social Chemistry 101 paper, you can find it here.

Important disclaimer: This is not a perfect Figure 1! I’ve seen better, and I think I’ve probably made better. But it’s a recent one for which I remembered to save my working drafts.

My high-level goals for a Figure 1 are:

Let’s break each of these down.

For me, a good example must hit several criteria:

And by making the figure as visually appealing as you are able, I’m referencing the entire study of graphic design. As far as I can tell, design is a skill that must be acquired by practice. The best tip I have is to notice what you like, and keep making things so you’ll improve. For any project, you just do what you can with where you’re at on your design journey—hence the “as you are able” part.

I’ll get into some additional goals for this particular Figure 1 in a bit. In the meanwhile, let’s jump right in.

My first drafts centered around an example from our dataset, “Asking my boyfriend to stop being friends with his ex.” I drew out several related social rules-of-thumb, connected them to the relevant characters, and also provided some attributes.

If you’d like a brief primer on what the terms in these figures mean, the Social Chemistry website starts with a walkthrough of the core concepts. 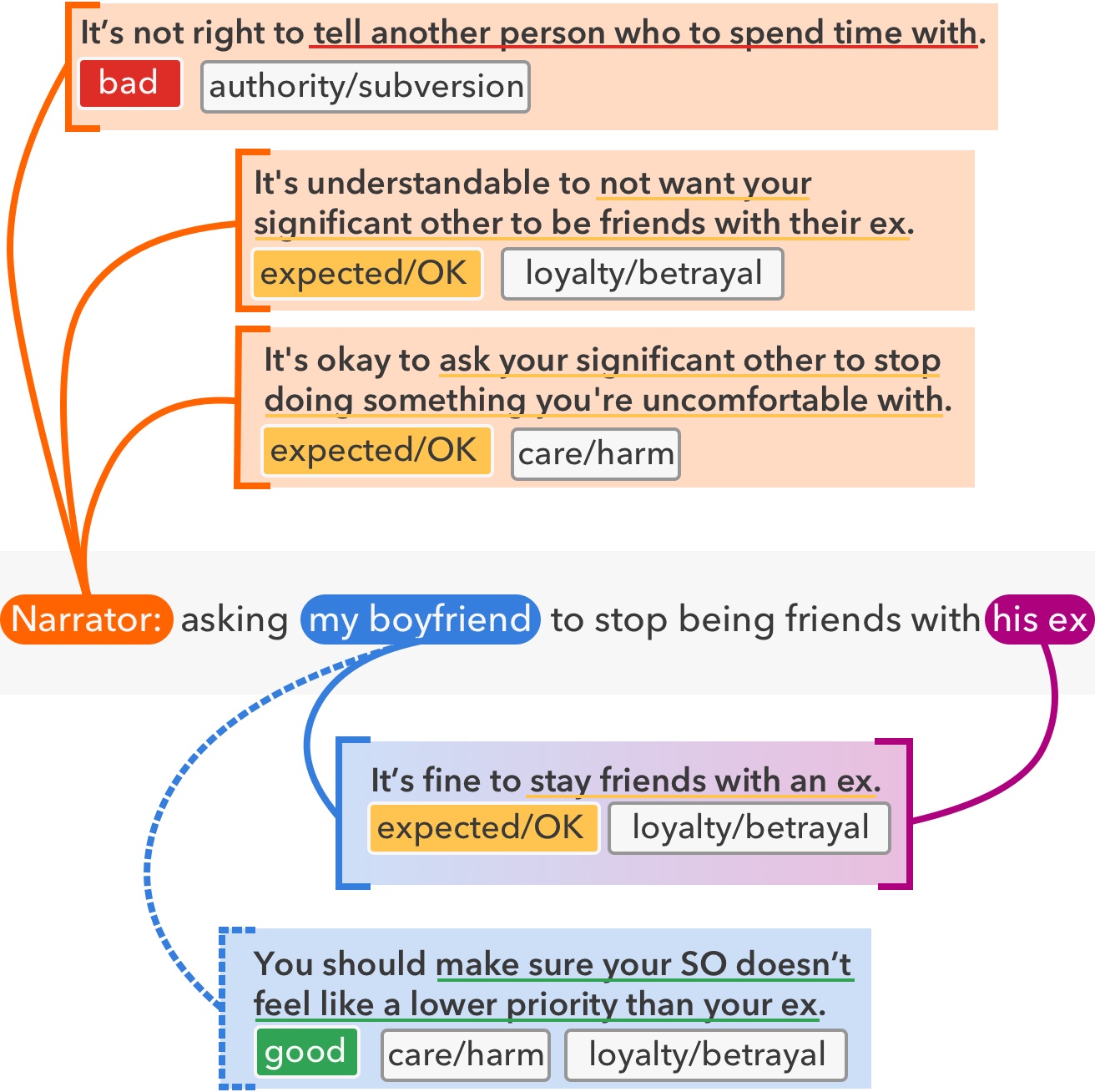 There is a lot going on here! If we focus on color, we have the colors of larger boxes representing the relevant character (orange, blue, purple), the underline and judgment box colors matching the whether an action is good or bad (green, yellow, red), and grey to otherwise provide borders.

I love using color to represent meaning in Figures, because our brains are great at doing color matching. A semantic color palette gives you an additional dimension to work with, allowing you to group concepts across space. [4]

If we think about the concepts introduced, there are also quite a few: a situation (center), characters (narrator, my boyfriend, his ex), rules-of-thumb (larger boxes), actions (underlined), judgments (good, bad, expected / OK), and moral foundation axes (smaller gray boxes). I’ve also tried to slip in one additional concept, which is whether the rule-of-thumb is being followed or violated. I did this by using a dashed line connecting my boyfriend to the bottom rule-of-thumb.

Introducing so many concepts right in Figure 1 means that the caption must do a lot of legwork to explain it. As a rule-of-thumb, the Figure 1 + caption package should be understandable by someone else in your area of study on its own (i.e., without reading the paper).

With such a broad color palette and high density of concepts, I then tried out a few drafts to reduce the number of things appearing on the page at once. 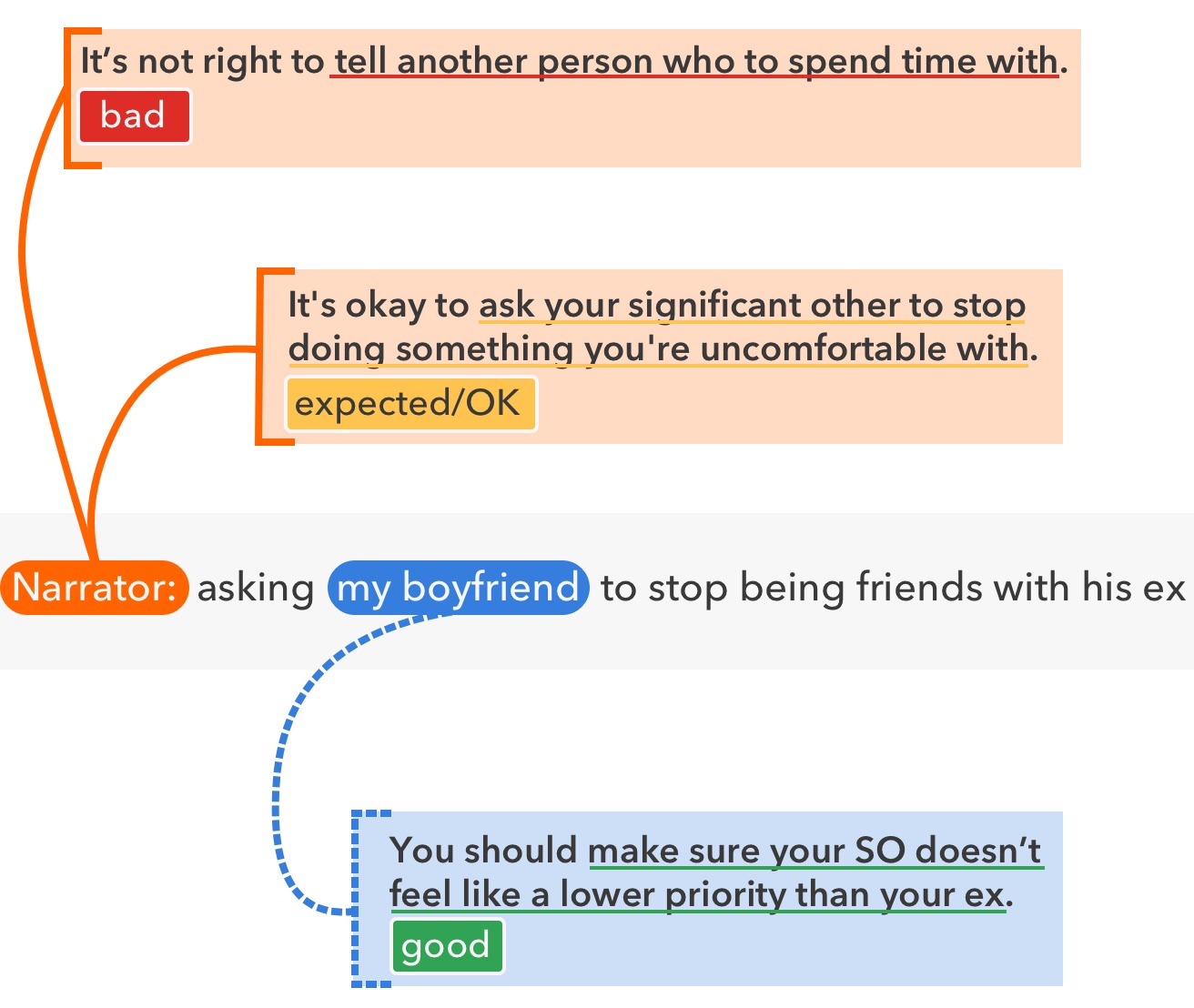 For v2, I tried eliminating the moral foundation axes and the his ex character. This reduces the number of concepts, and slightly narrows the color palette. (If we’d further developed this version, I’d have compressed the spacing to make it denser.)

I wanted to try a much simpler example for v3 to try to evoke the essence of the project: rules-of-thumb (it’s rude to make loud noises while others are sleeping) annotated on characters (my roommate) in situations (running the blender at 5am). This his the other side of the complexity spectrum compared to v1.

Though we didn’t keep it, I think it’s helpful to try these minimalist reductions and see whether they work. I find I’m often trying to balance communicating the scope of what we did, with clearly getting across the key idea. 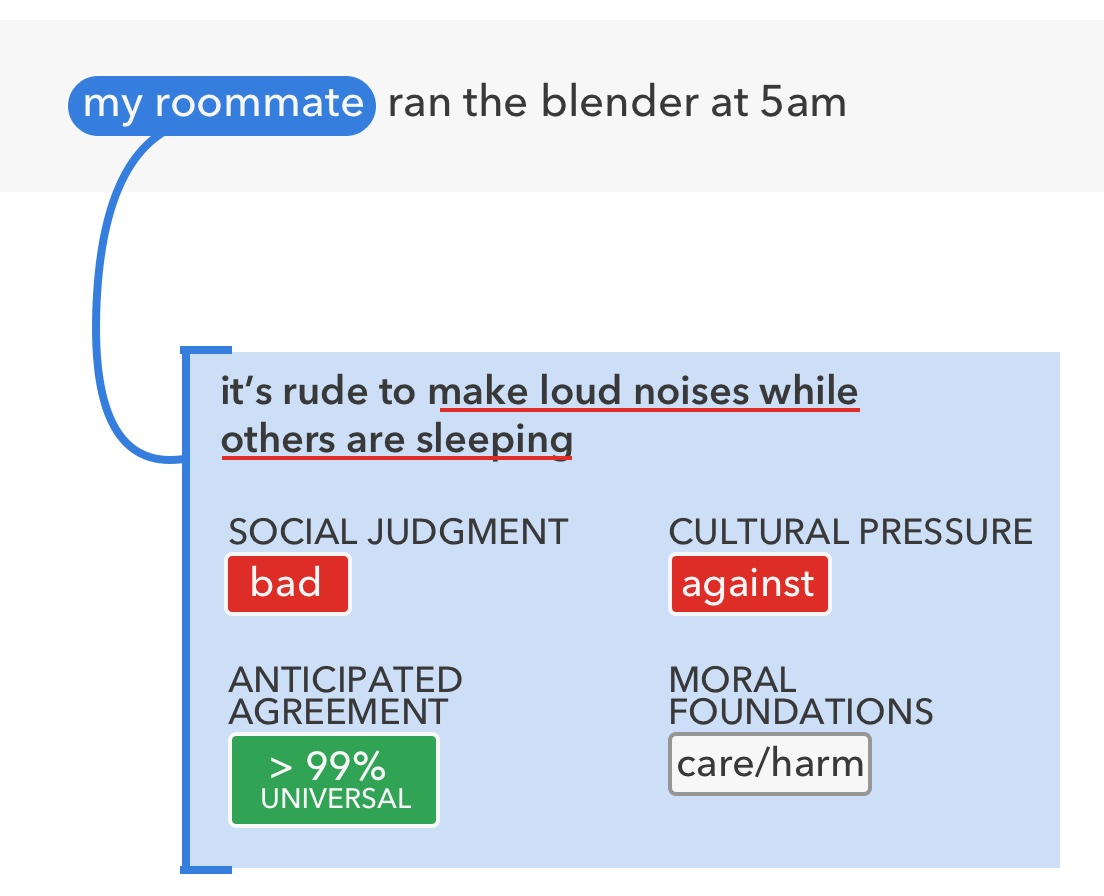 v4 expands on v3 in a different direction. Rather than emphasize the multiple character and multiple perspective angles we saw in v1 and v2, we introduce more attributes in v4: cultural pressure (against) and anticipated agreement (> 99%). This starts to hint at the density of the annotations we collect (we have over ten attributes per rule-of-thumb).

At this point—if not before—it’s good to share some drafts with collaborators. I’m usually so zoomed into the details of a project that it’s tough to see the bigger picture. Collaborators who aren’t as tightly involved can be a huge help because they don’t remember as much about the project. You can use them to simulate someone coming to the paper fresh.

Permalink to “Rethinking the Design” #

After discussing the designs with my collaborators, the main feedback I got was to evoke a graph-like structure from our work.[5] This presented a new challenge to convey visually, because our annotations are dense, but have almost no connections between them.

To display a denser graph that still illustrated our problem, I eventually realized we could pivot through a few attributes in order to show multiple rules-of-thumb. This is best shown rather than described, so I’ll save further explanation until after v5.

My other goal, since we had settled on Social Chemistry as the name for our work, was to more deliberately evoke a “chemistry” look. I attempted this by mimicking the design of chemical structural formulas, which use hexagonal shapes. 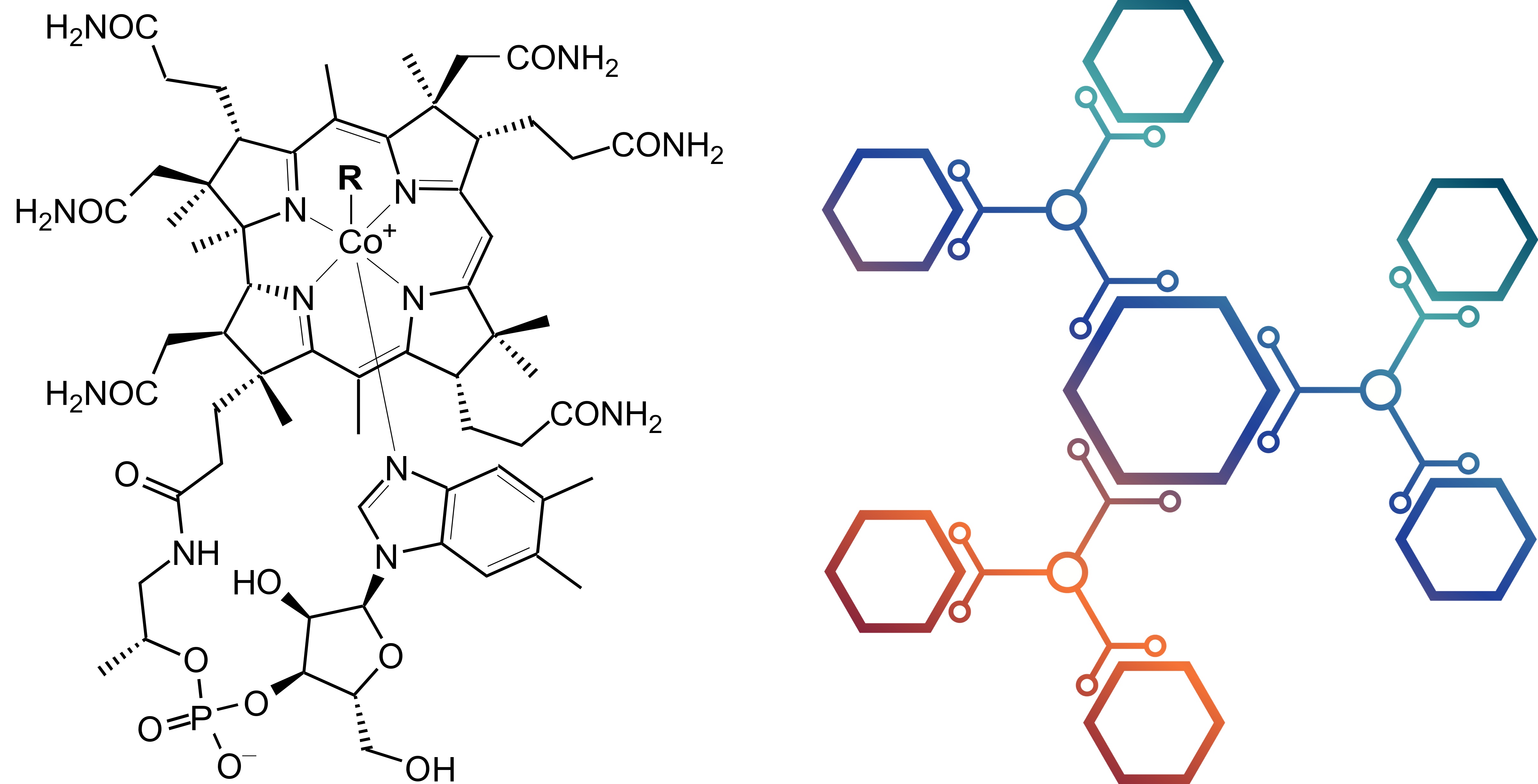 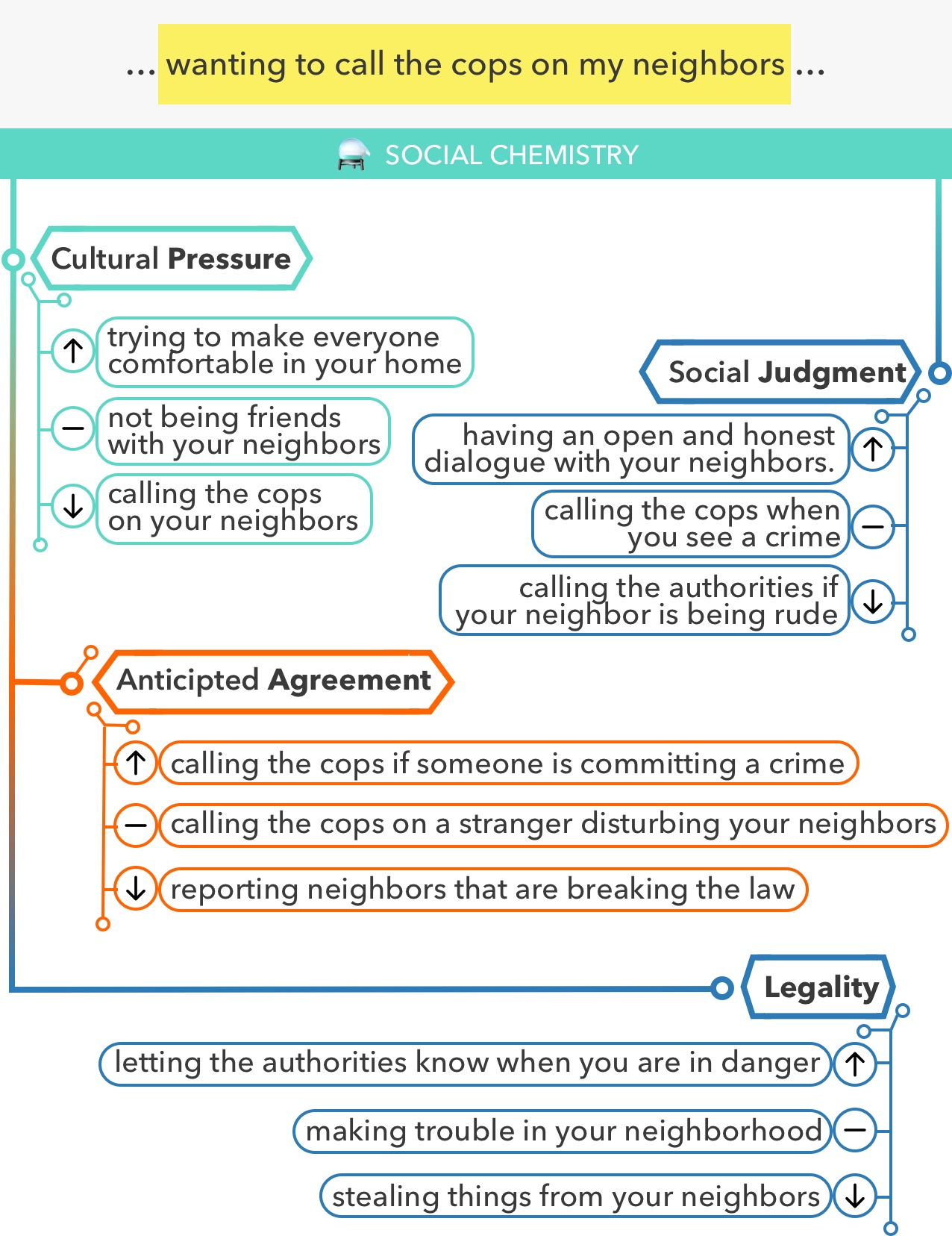 The downside of this is that we move away from showing the literal annotation that we performed, which also sometimes makes the rules-of-thumb more loosely related to the actual situation.

The upside is that we can show a richer graph structure that illustrates a strength of the work: a hybrid between structured values (the attributes and ↑/—/↓ labels) and unstructured natural language (the free-form rules-of-thumb).

Aside: Notice that color no longer conveys any meaning in this figure 🤷 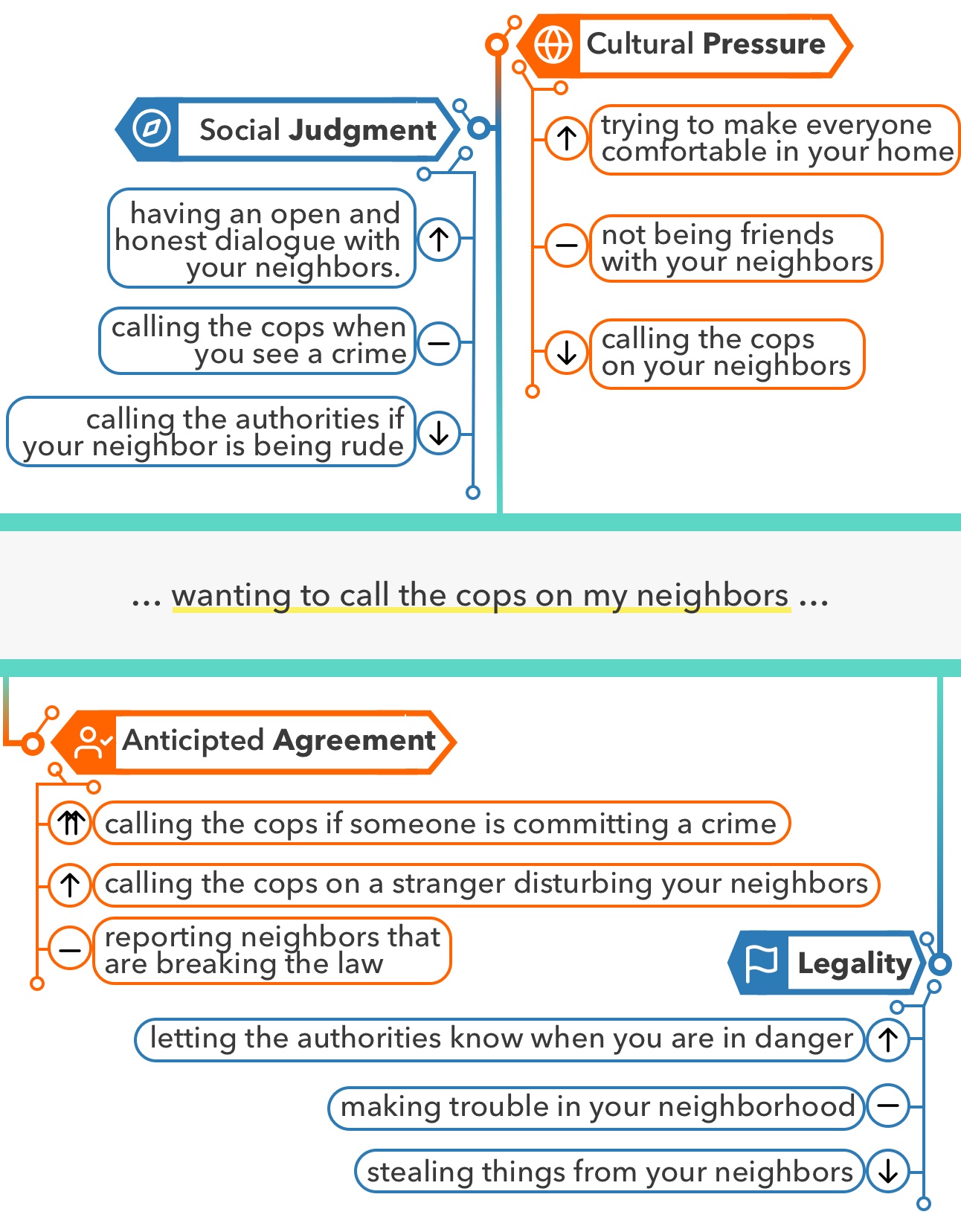 At this point, I was honing the visuals. 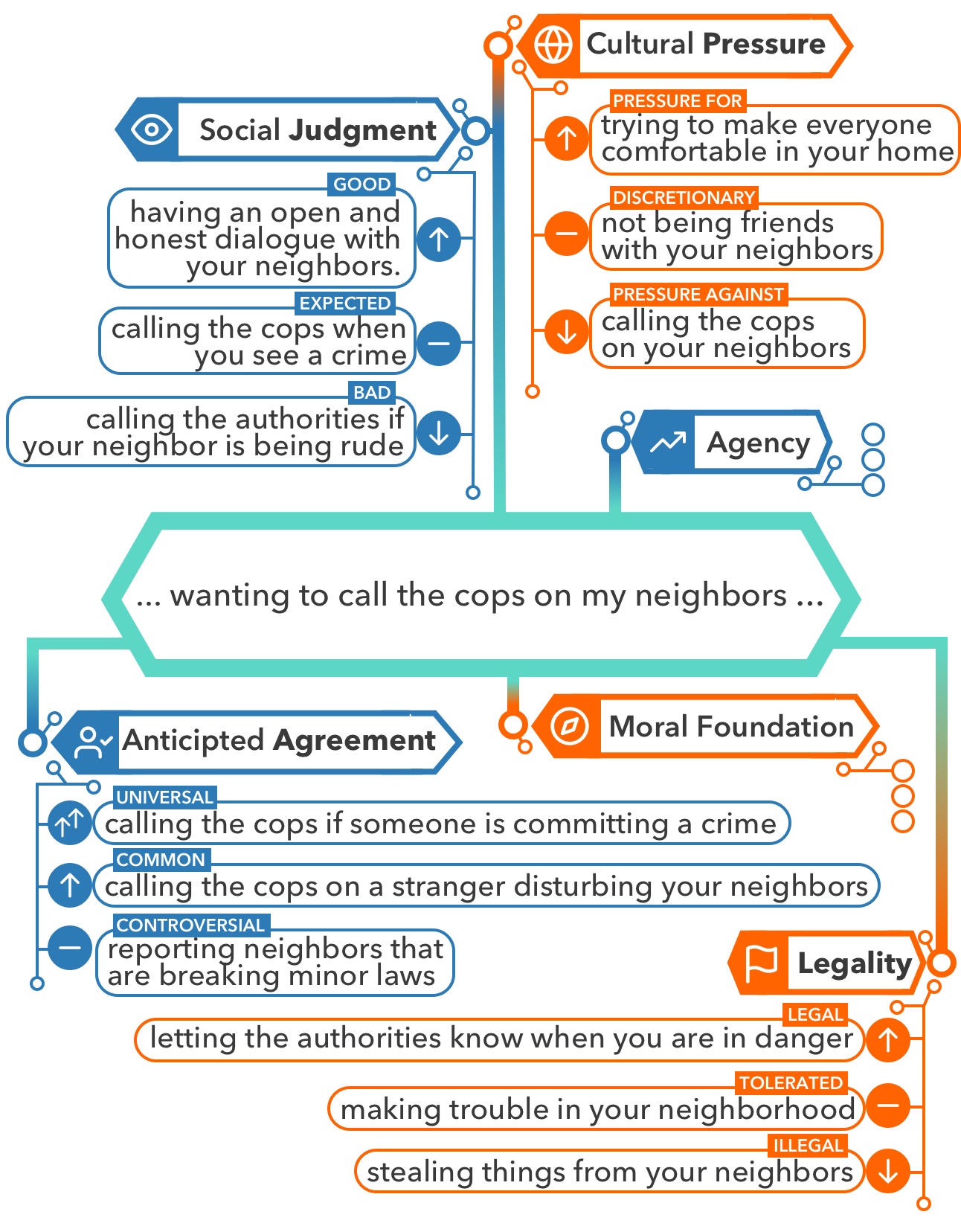 At this point, I was honing in on the design elements, and adding more bits as necessary for clarity. 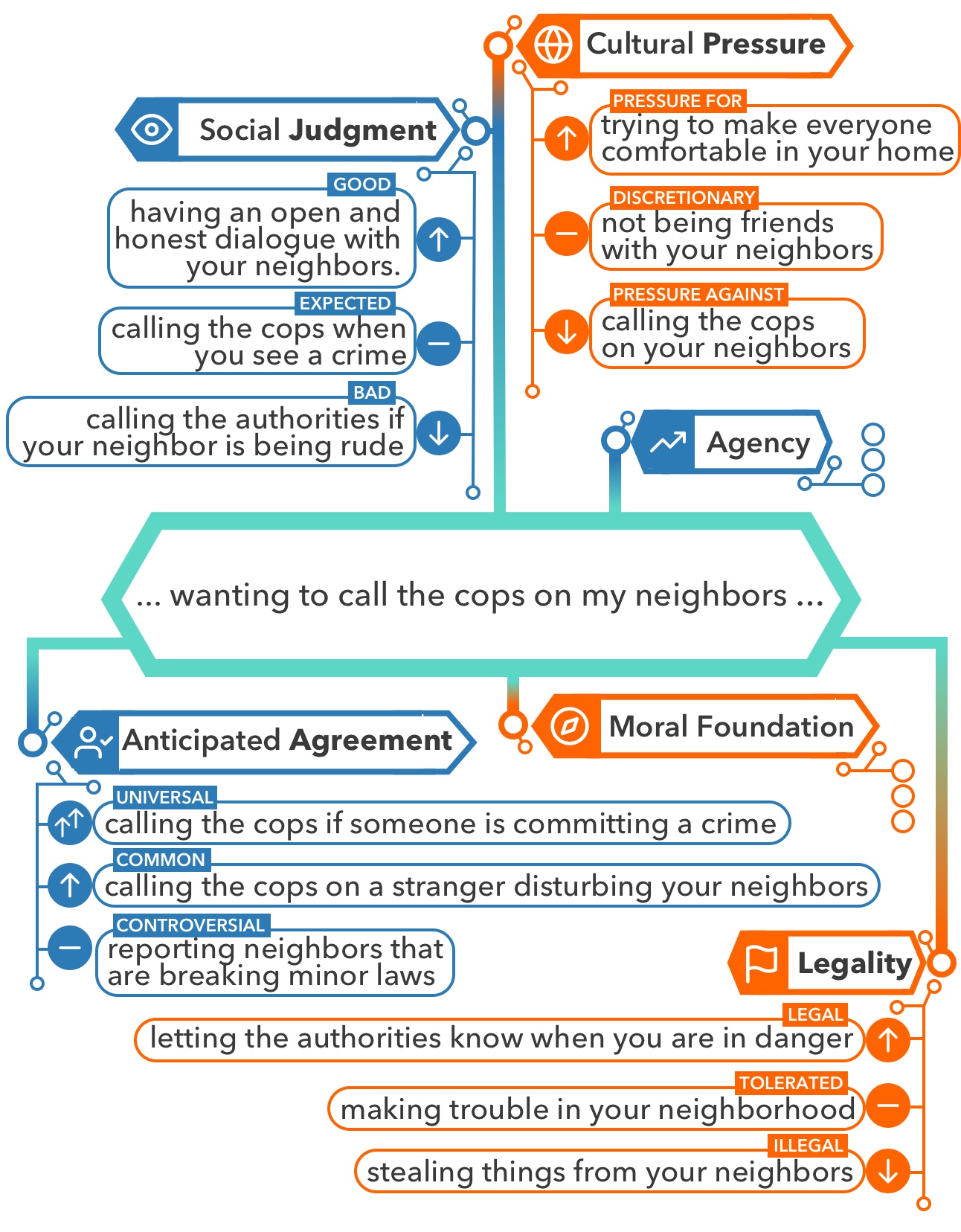 Can you spot the difference?

I had spelled "Anticipated" wrong. I’m certain one of my coauthors caught this.

Lack of spell-check is one knock against Sketch, the drawing software I use.

Eight short versions later, we’ve got a Figure 1. Now, rinse and repeat—with slightly different goals—for the other figures in the paper.

As I was writing this, I thought of a handful of tips that didn’t neatly fit into any of the revisions.

Maybe if you’re a design guru you can think at the speed of click, but I find it vastly easier to cook up an initial design with a pen.

Usually, my first drawing won’t work perfectly with the space constraints of the figure, because I misestimate the sizes of objects or text. But it gets me started.

2. Use a Text Size Guide 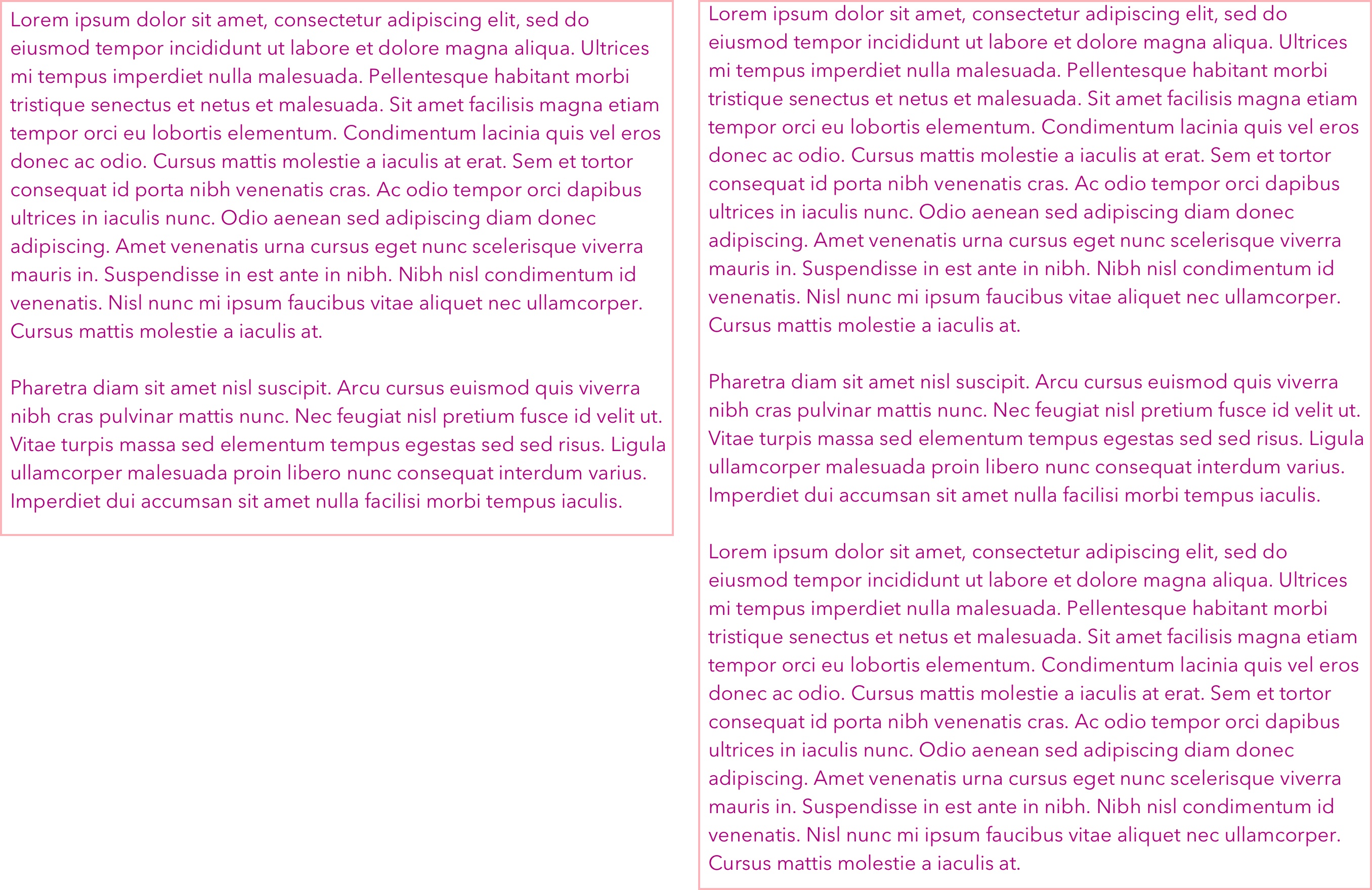 The smallest text in your figures should be around the font size of footnotes. It can be difficult to judge this when you’re making the figure. I made some placeholder figures that have text at a legible size, and I use them as a guide when I’ve moved from pen and paper to building the actual figure.

Permalink to “3. Start with Decent Colors” # 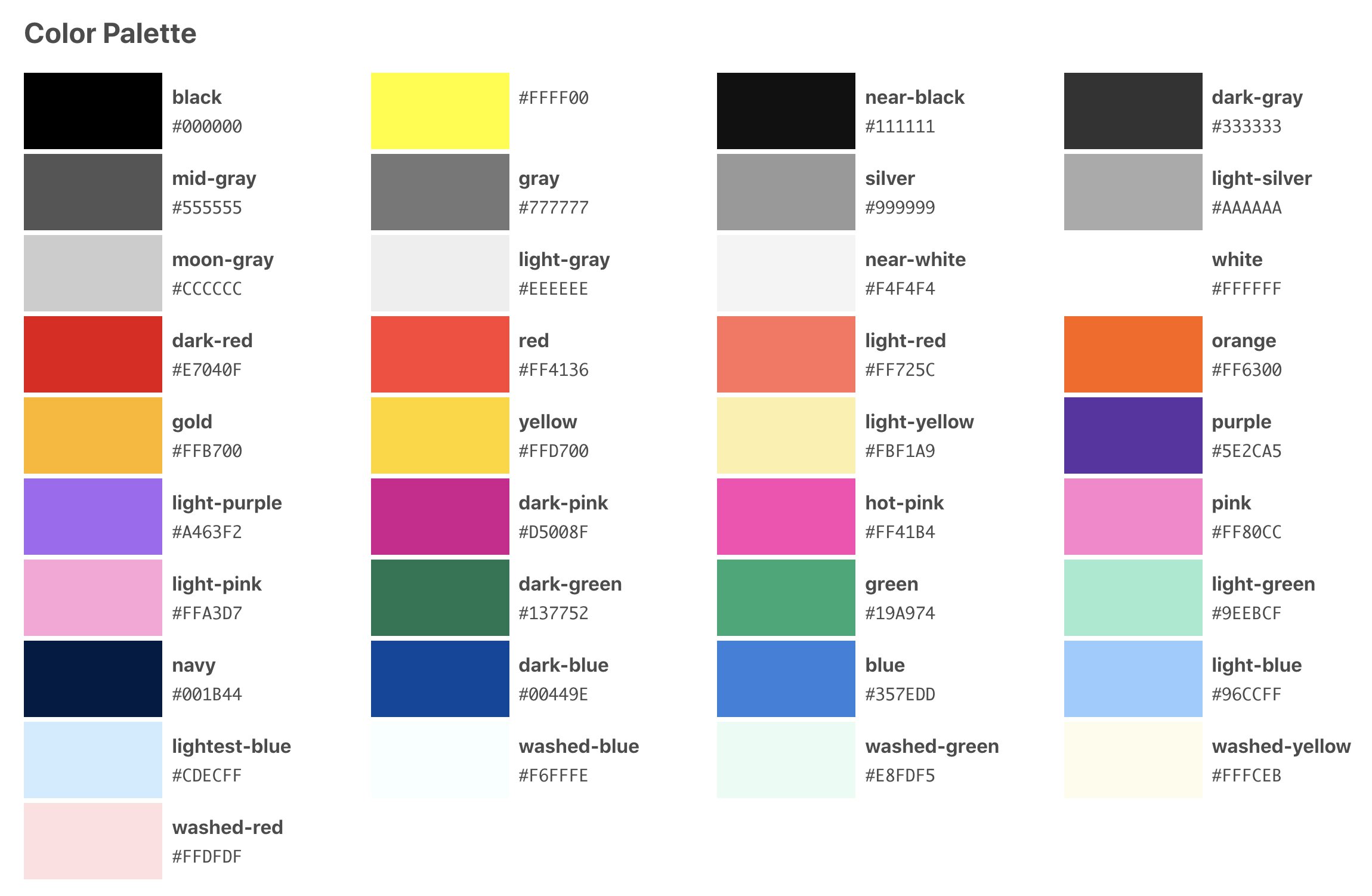 If you’re used to thinking that red should be #FF0000, you can immediately up your aesthetic game by starting from a curated palette, like the basic one above from Tachyons. If you’re using colors to describe a scale, either with sequential values or unrelated categories, consider starting from ColorBrewer. If you’re making a gradient, check out the collection at uiGradients.

Permalink to “4. Care about Contrast” #

The simplest tip I can give is to try switching your text color from black to white when the background gets darker.

If you want to be thorough, run any color combos you’re worried about through a contrast checking tool.[8]

Permalink to “5. Export a Scalable Format” #

E.g., PDF for a paper, SVG for a website.[9] That way text and graphics remain sharp when people zoom in to read the tiny text you crammed in there when ignoring tip #2 (hey, no judgment).

Figure 1 is important for memory, engagement, and as a visual explanation.

I put forward three common goals for a Figure 1:

In my Figure 1 design, the key points I hit on were:

Then I gave five final tips:

If you enjoyed this, consider following me on Twitter, or subscribing to my monthly email digest.