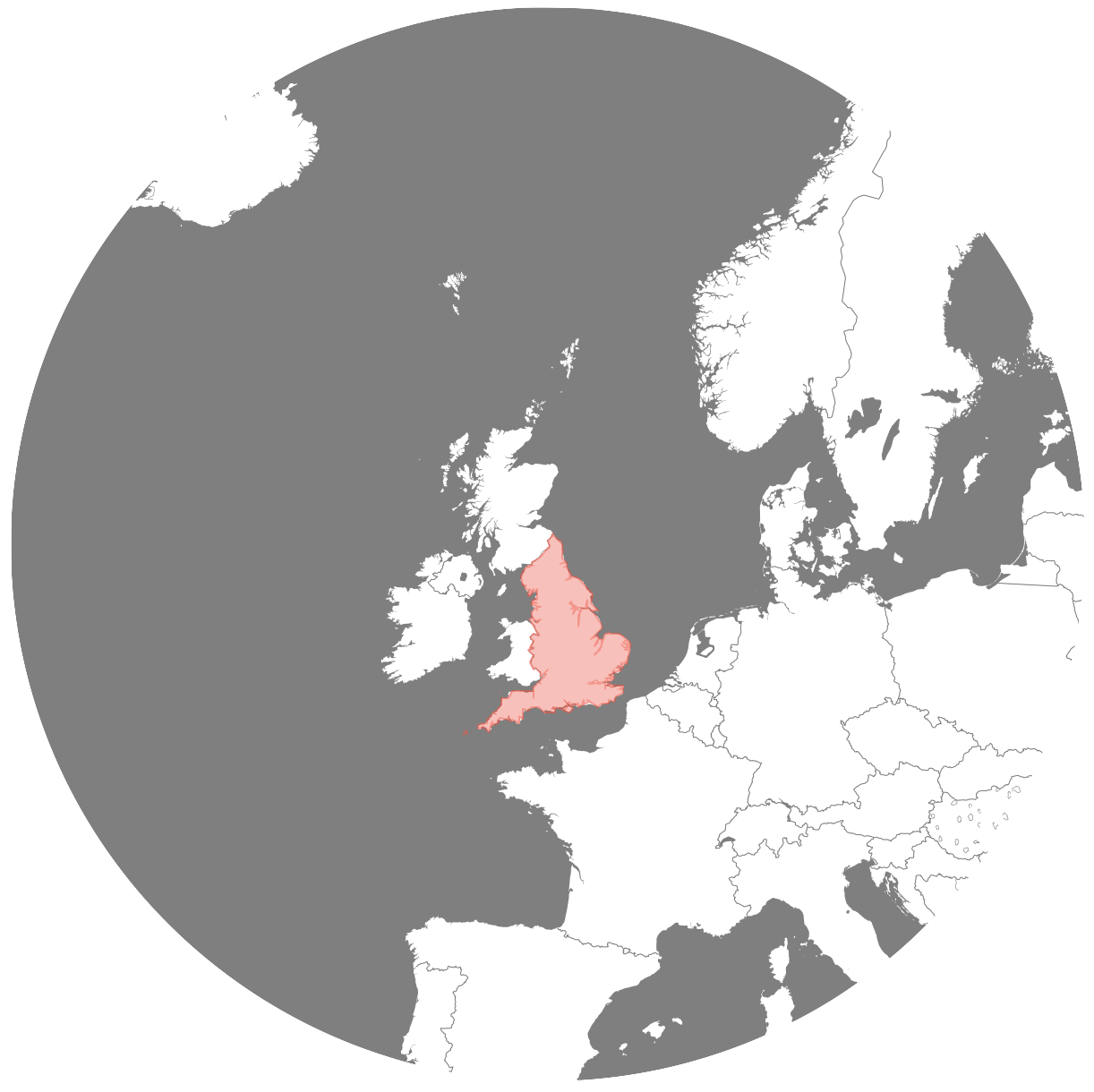 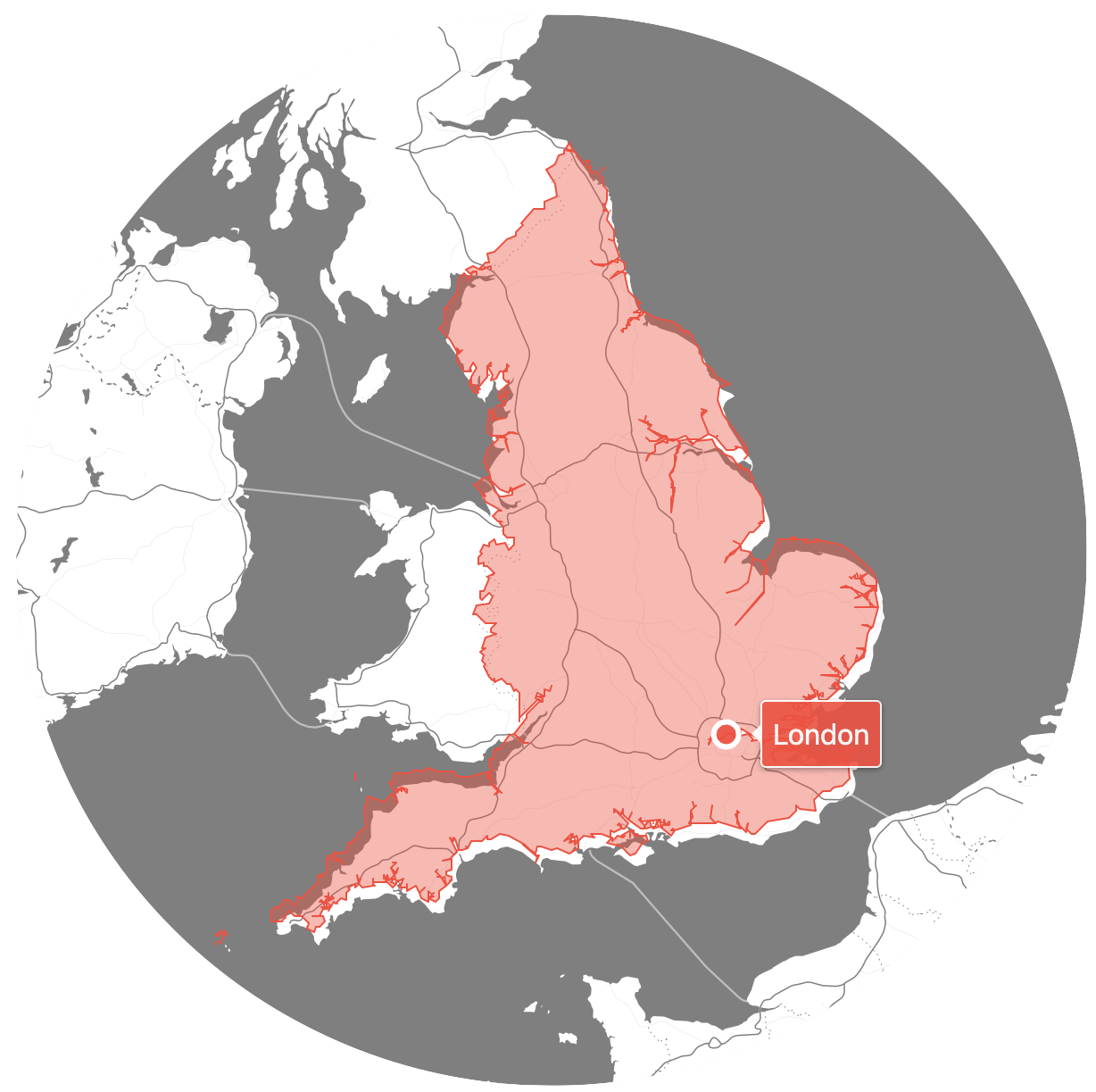 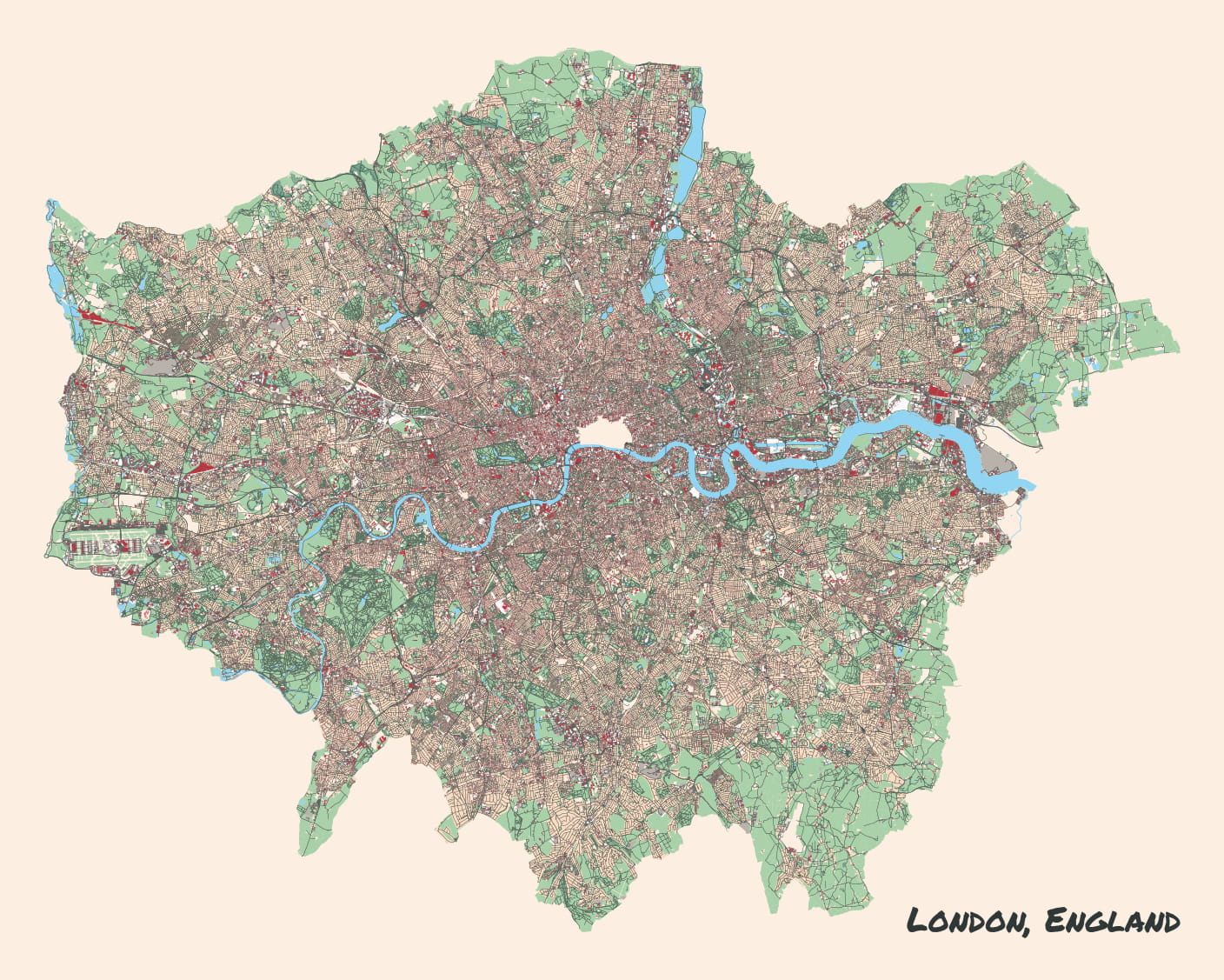 My last visit to London[1] was ten years ago. I like visiting cities—especially big ones—after waiting a long time, because I seem to end up with completely non-overlapping experiences. Another illuminated sliver of the whole.

We stayed in a flat down in Kennington. We had some AirBnb credits from issues we kept having in France (tl;dr: missing AC in 100℉+ heat waves), so we could afford to rent an apartment that actually had a kitchen and a living room. Otherwise, affordable options would have been rooms in student dorms. We cooked a few meals, but it was hard not to indulge a bit since London’s food scene is booming and eclectic, especially after a month up north. 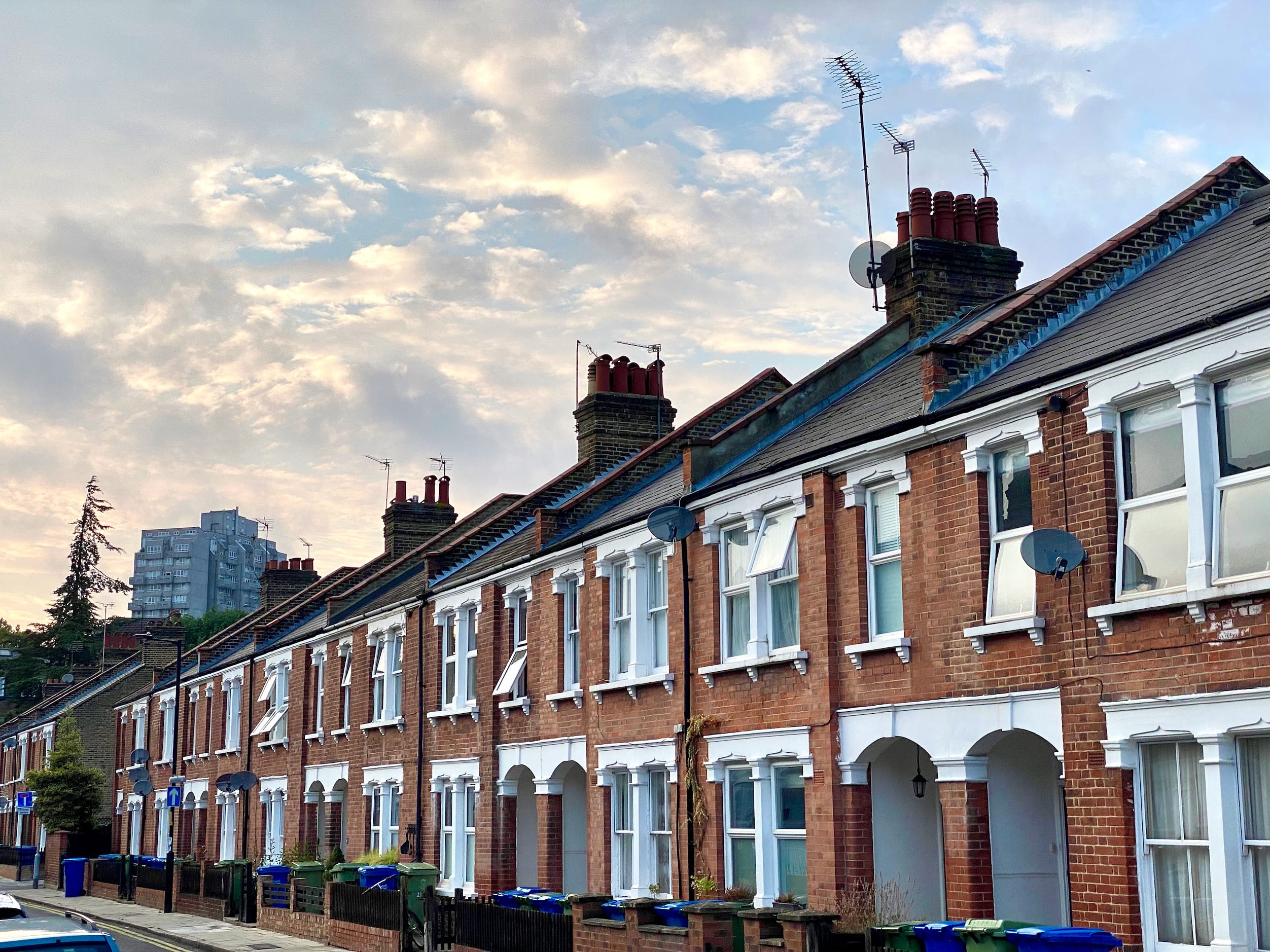 Cute brick homes by us. Keep an eye out for posh ones (upcoming) to be twice as high.

We rode out the tail of the aforementioned heat wave in Scotland, and now it was pleasantly warm and sunny. Which was lucky because we also arrived right when major transportation worker strikes were happening. Our train down from Glasgow got sent off in a confused frenzy without half the people aboard, though they let us on another soon after. One of our days in London, the Tube (subway) was totally shut down, so we had some nice long walks up and around the heart of the city. 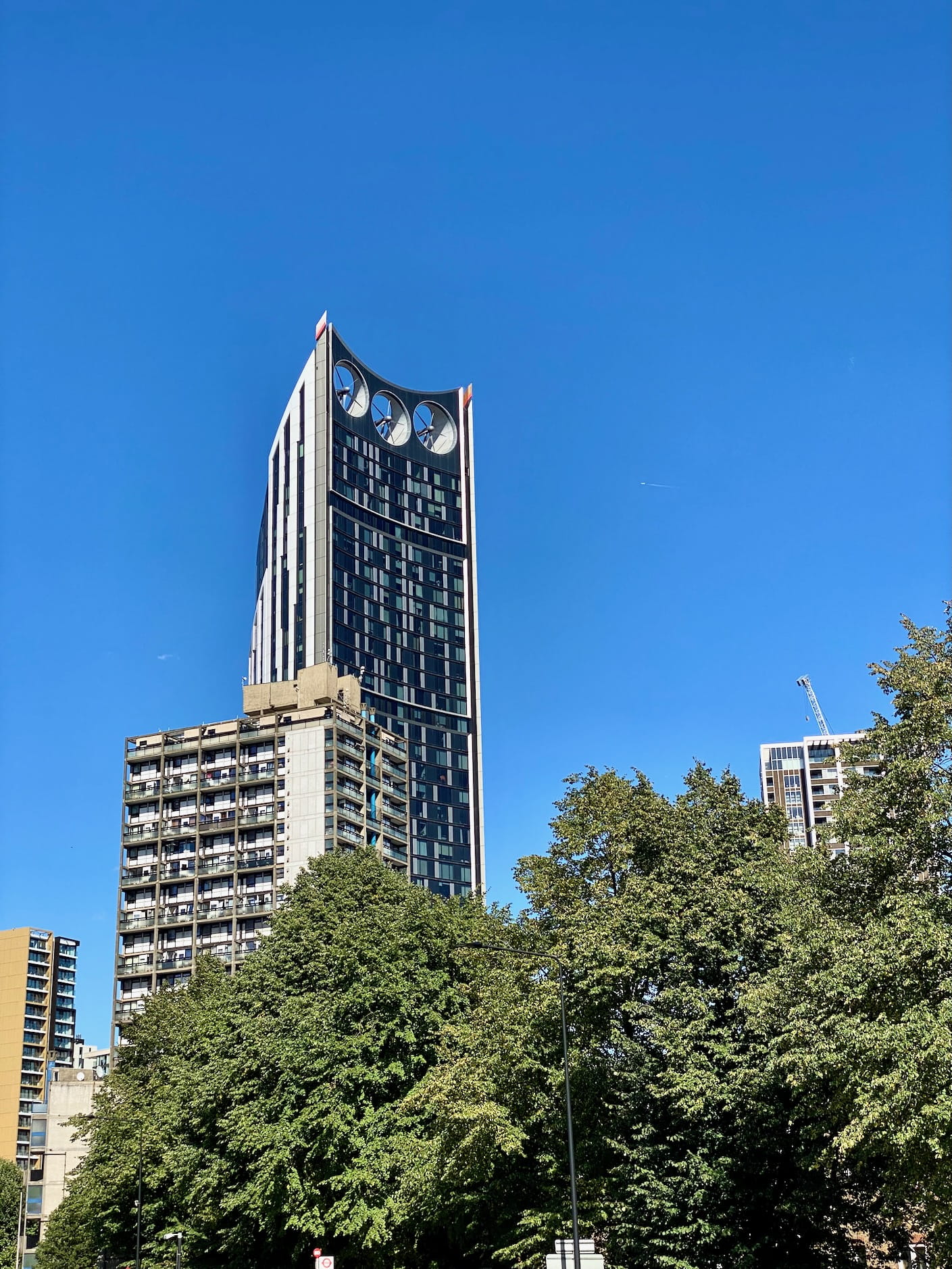 I would be surprised if the fans at the top did much, but you gotta give them style points. 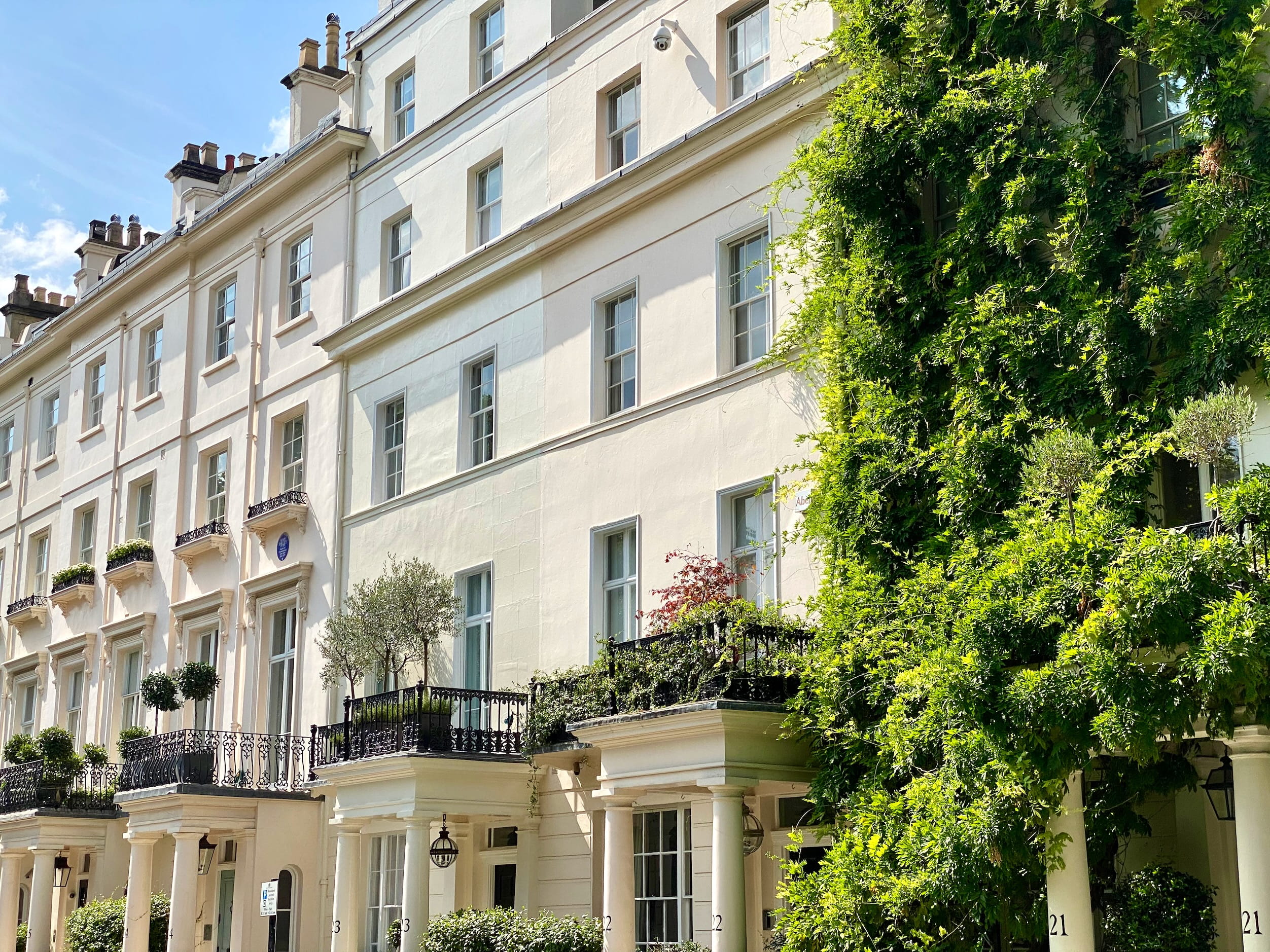 We had such a weird experience visiting these two districts. It would color our whole perception of London.

The perfume store is in an area called Belgravia. We go there and I walk around to kill time. Fortunately there were several big parks nearby. I stroll to them to go have a nice sit down and read. 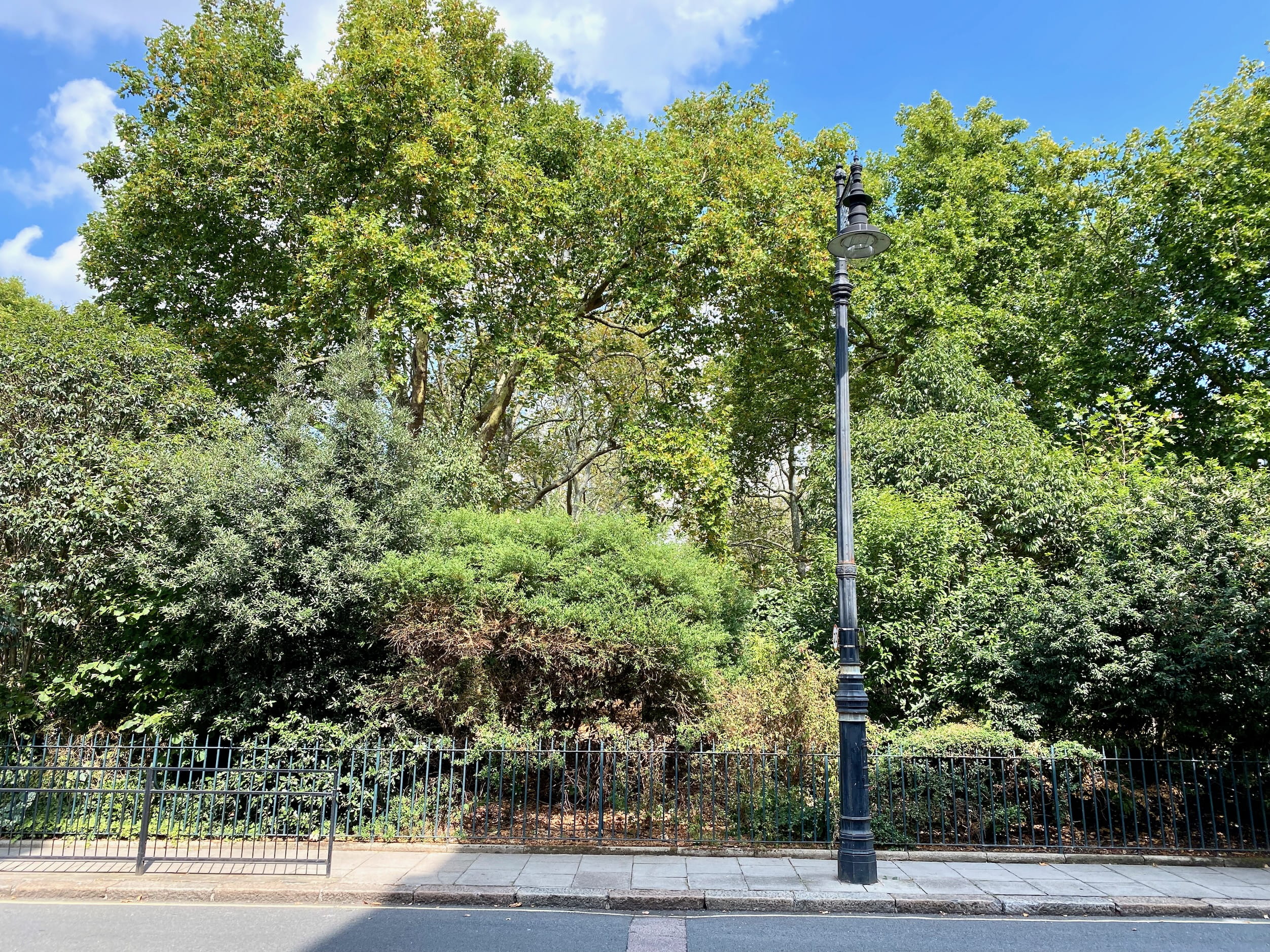 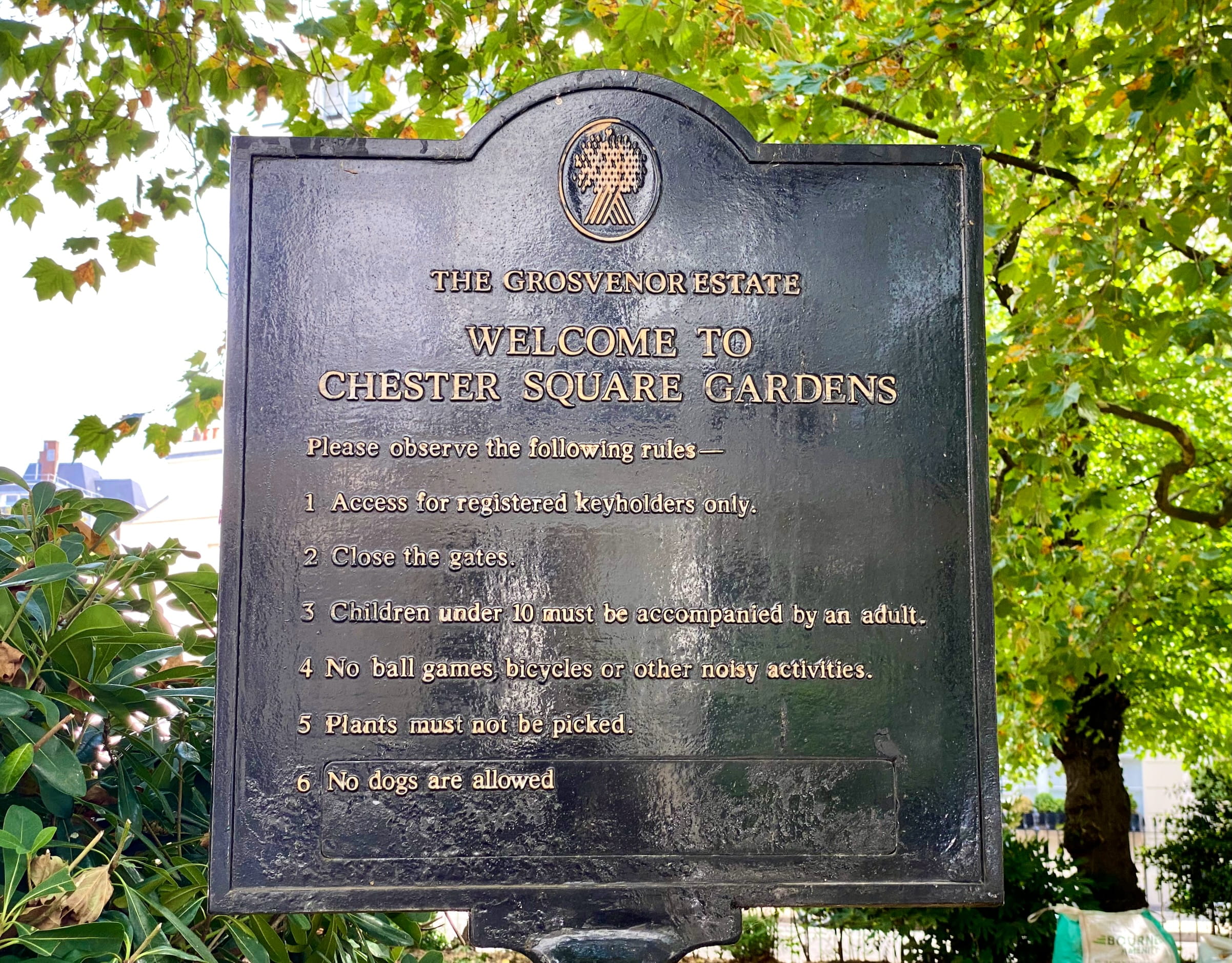 Or that’s what I thought I’d do. But private parks struck again. You’d think I’d be prepared for this since I hit private parks in Edinburgh, but this time I was struck by their sheer dominance. There was no public greenery within a half hour walk. I tried park after park, only to find them all gated and locked. Bah humbug.

As I walked around, I started noticing strange things. The cars were exclusively Rolls Royce, Bentley, some Lambos, and the occasional Tesla. Down the street was an establishment with people lining the porch wearing—I kid you not—smoking jackets, puffing on cigars. At the corner was an extremely pink building surrounding by relatively normal people who looked universally uncomfortable. 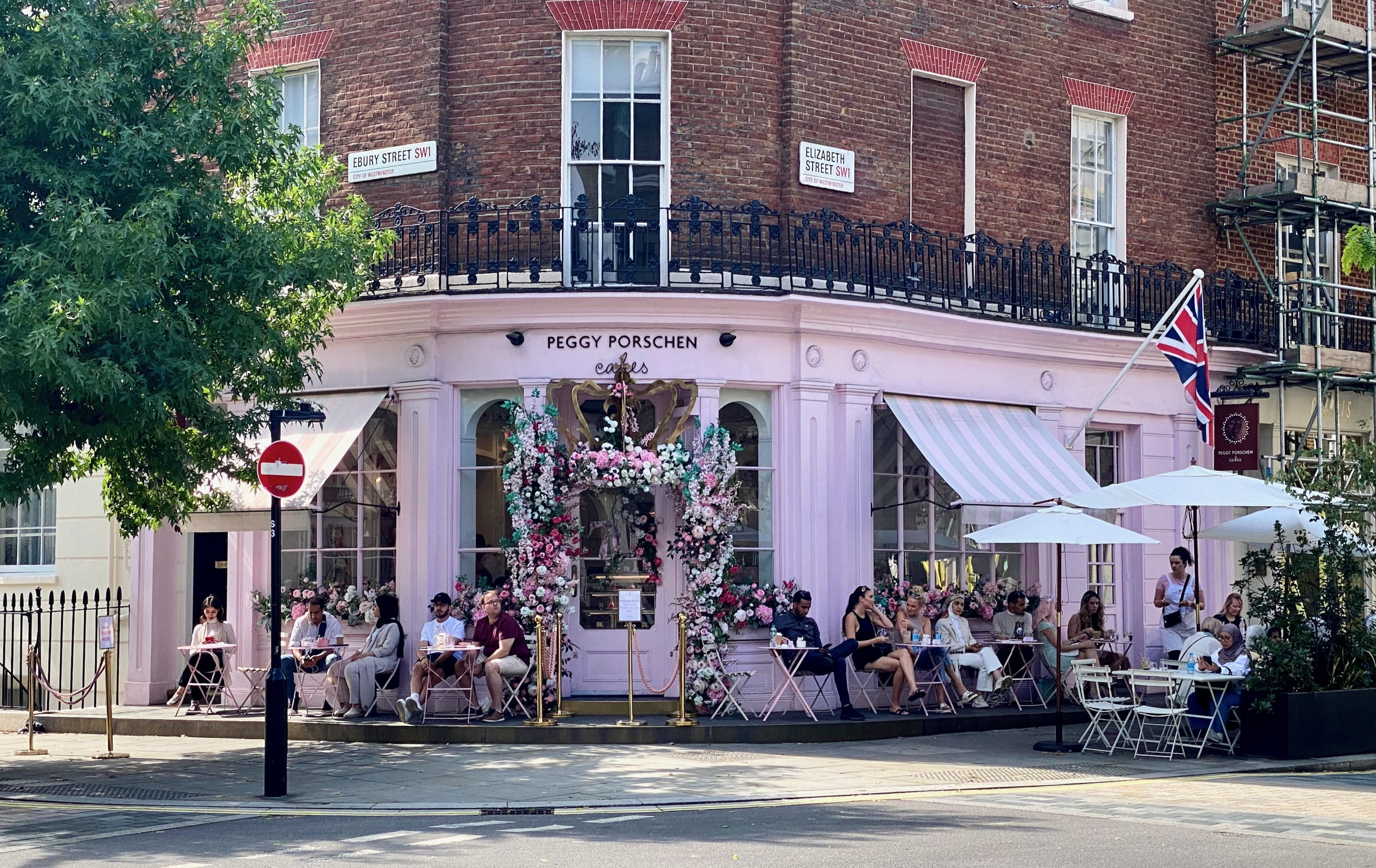 We left and headed towards Mayfair, soon passing a Google office. 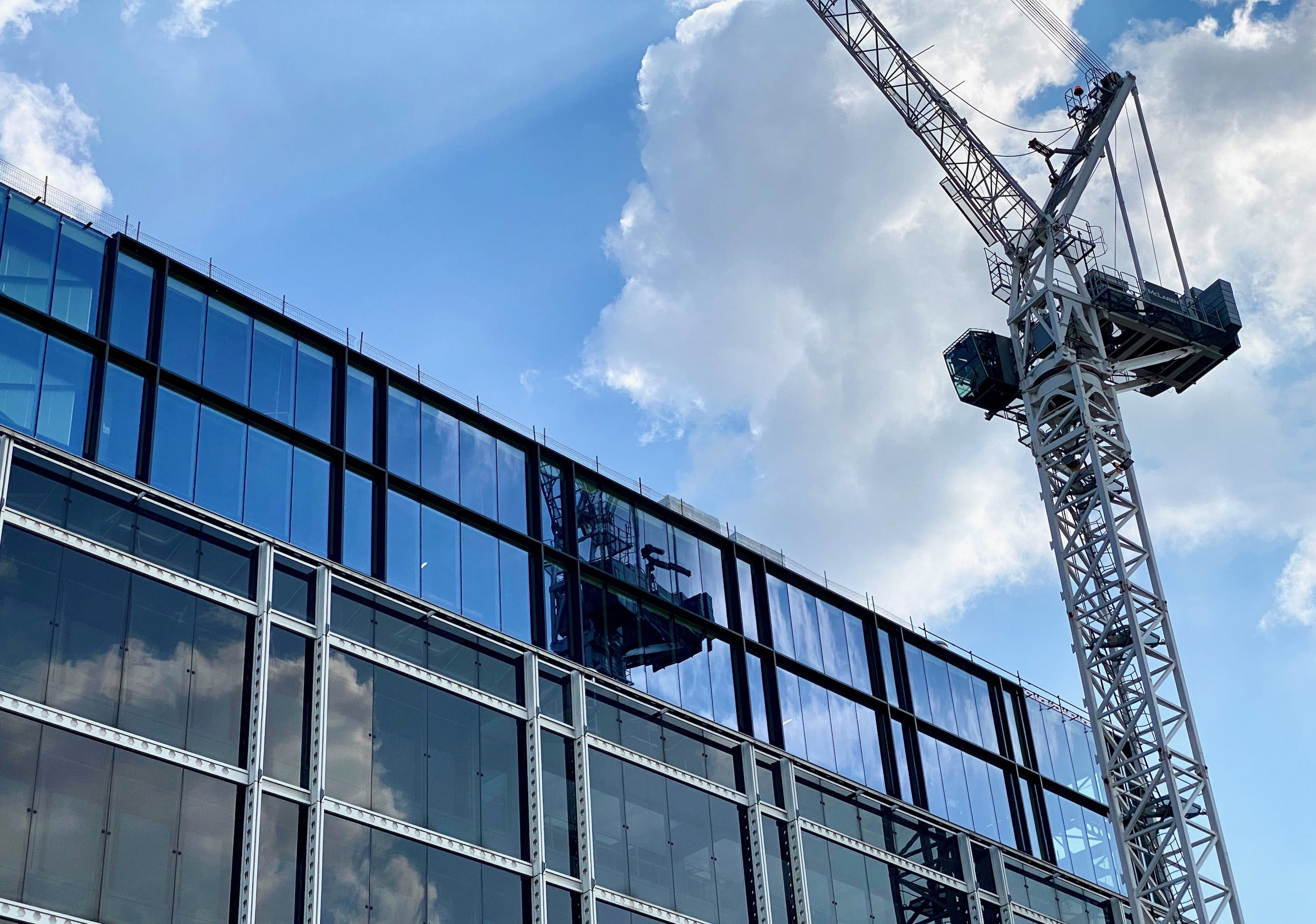 Of course the Google office would be here.

We headed to the clothing store, someplace called Browns. We get in and a team of no less than three suited security guards greets us with relaxed smiles (our threat level: harmless but confused).

We head up to the second floor, which is where it starts to get truly weird. A sixty-something man stands at the top of the stairway, wearing a suit with that unique combination of expensive material but bizarre style that signals designer fashion. He is blocking us from entering any of the rooms with clothes in them. He asks us what we want. We explain the piece Julie would like to try on, and he informs us they don’t carry it in the store, and stares at us.

It is extremely clear we are expected to get out. I am offended in a way I don’t think I’ve ever felt before and don’t understand,[2] so out of some weird desire for defiance I ask, “well, can we have a look around then?” He says, “of course,” and gestures in dismissively. I try to enjoy myself flicking through a rack of strange colors and fabrics without price tags that are apparently dresses, but Julie soon smartly tells me there’s no point really and we exit.

I had recently read that there’s a clear and ancient class stratification of British society, though I didn’t dig into any details.

This whole experience left me feeling bleak. The wealth we’d spent half a day walking around felt, for lack of a better term, pointless. Everything was expensive and nice, but in a way that felt hollow and creepy. 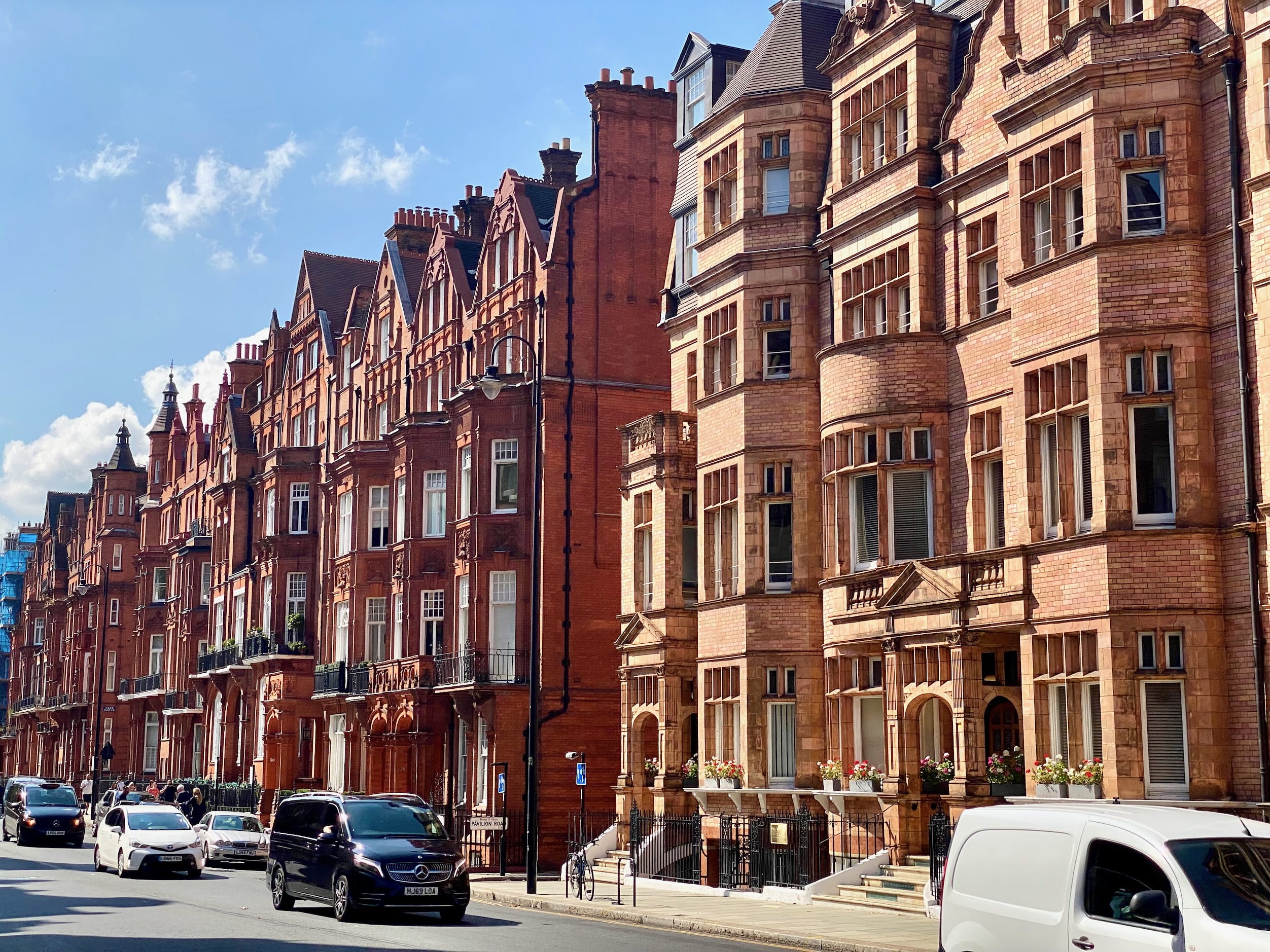 The rest of our explorations in London would be much more welcoming and pleasant. One of the friends we met laughed when we told her where we went that day. We really had somehow chosen exactly the poshest places to wander through.

But even though we didn’t encounter such obvious class boundaries again,[3] I couldn’t shake the uncomfortable feeling the entire rest of our time there that everyone was sizing me up and putting me into a box. (And that my box was lousy.)

Hell yeah, London! Hit up the Tate Modern, but wish I had more time to see even more. 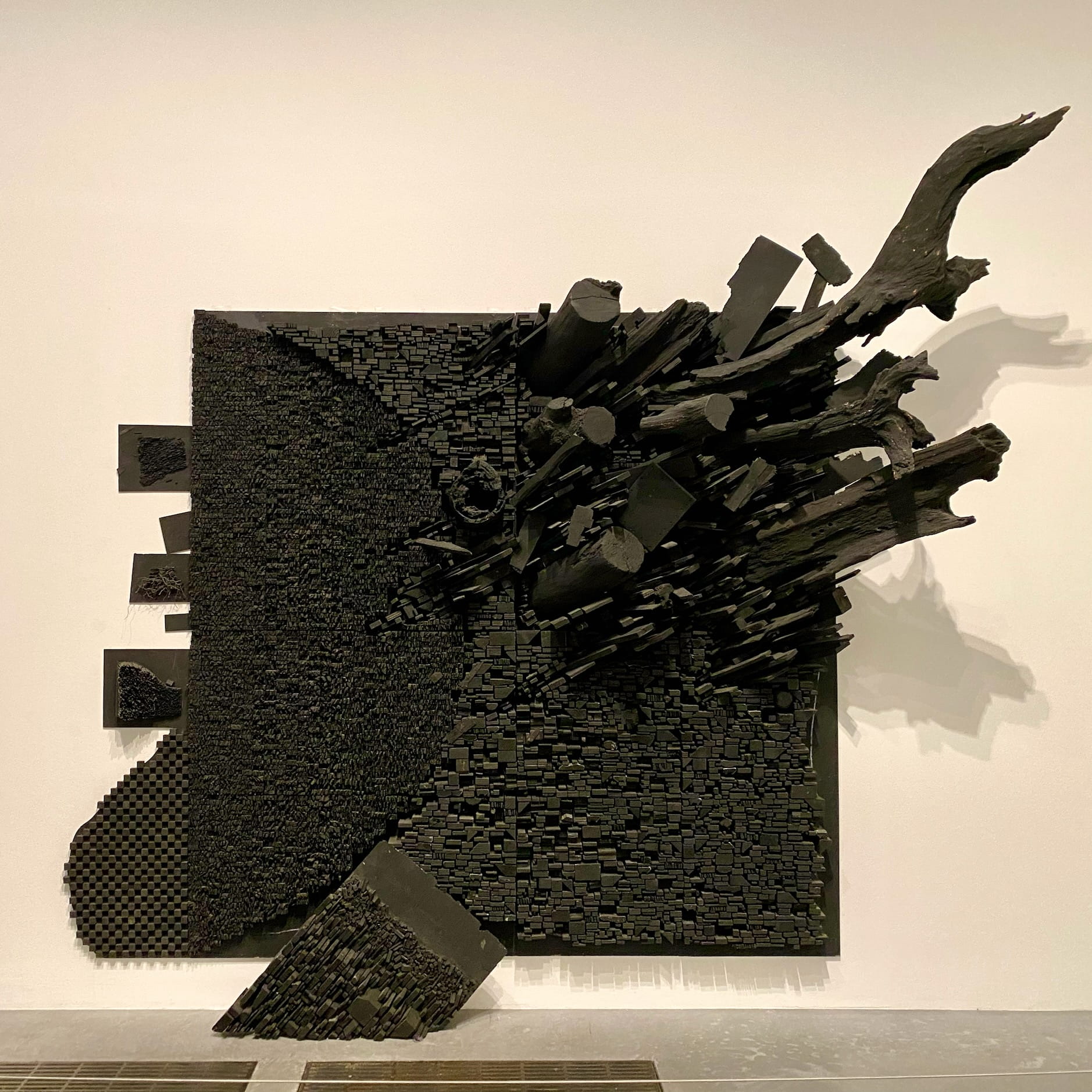 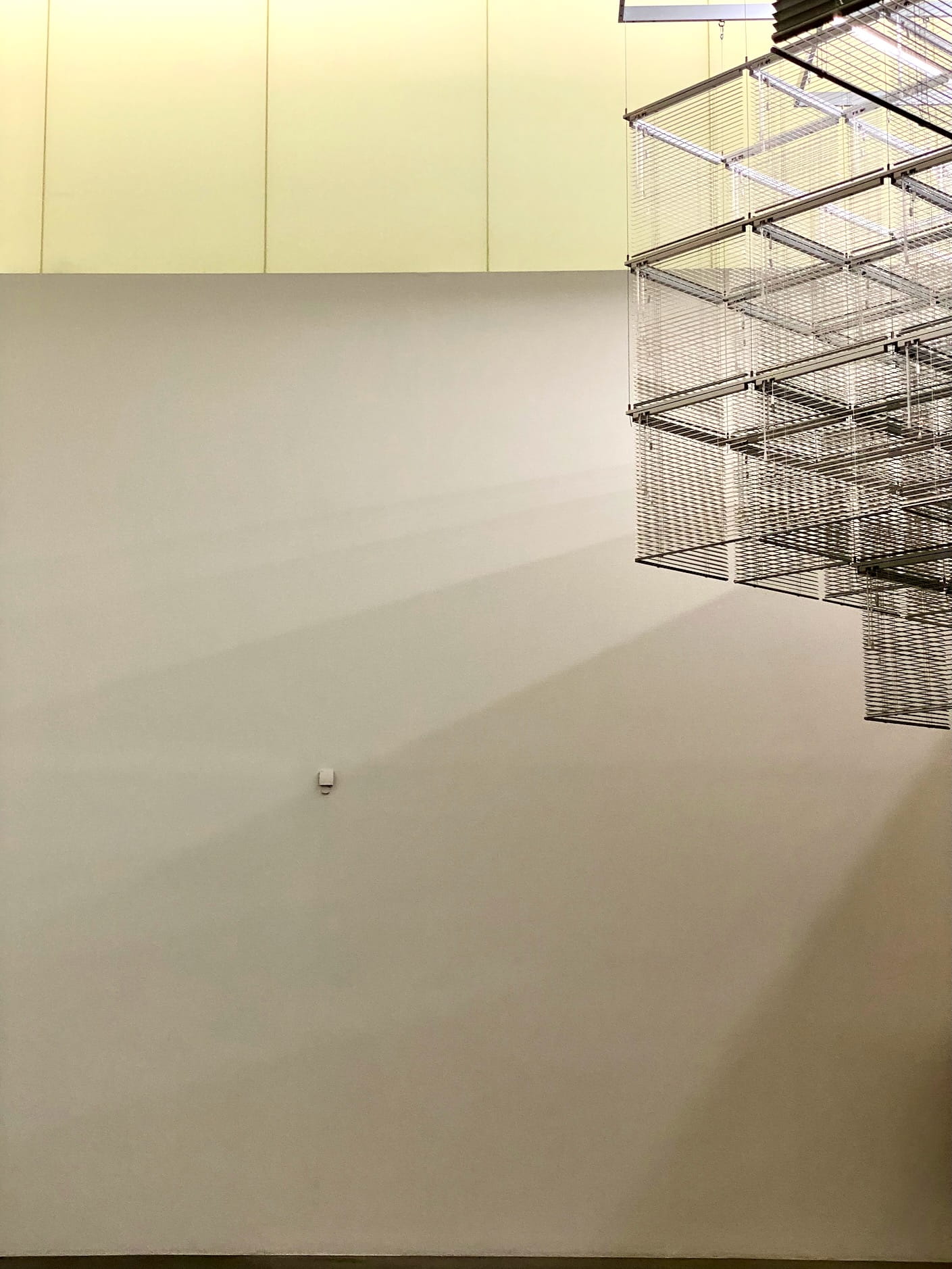 Permalink to “A Pricy Tube” #

Holy shit, a single ride on London’s metro costs £6.30 ($7.65)! I usually think of public transit as a financial rounding error and happily take it in any city with no reservations. But $15+ for each there-and-back-again certainly dampens my willingness to take two outings a day.

Of course, now that I look it up online, I feel like an idiot. If we had tapped our credit cards rather than buying tickets each time it could have been as low as £2.50 per trip. I wish they had clearer signage up for this—we assumed we’d need to sign up for the local transit card (Oyster).

Walkability as Microcosm of the “Local vs Visitor” Divide

Permalink to “Walkability as Microcosm of the “Local vs Visitor” Divide” #

We found London to be mediocre to walk around. The biggest problems were the long distances and the convoluted street network. To get from A to B, we’d often walk for about 45 minutes. Tube stops were somehow just oddly located enough walking made more sense.[4] Roads always curved or didn’t allow access to other ones. We needed to constantly check our phones. I started memorizing intricate sequences of block numbers and turns just so I could put Google Maps away for five minutes.

But when we talked to some friends living there,[5] they mentioned London’s walkability as one of their favorite features. We were flabbergasted. But when we talked about it a bit more, we realized our behaviors were quite different as tourists. Since they knew where to go, and weren’t in a rush to see several districts in the same day, they’d usually be walking around only one neighborhood. And each neighborhood has its tube stop, and a main street centering around it with plentiful commercial options. They wouldn’t make accidental journeys to private parks, and the parks they would visit fit well with the other places they went. 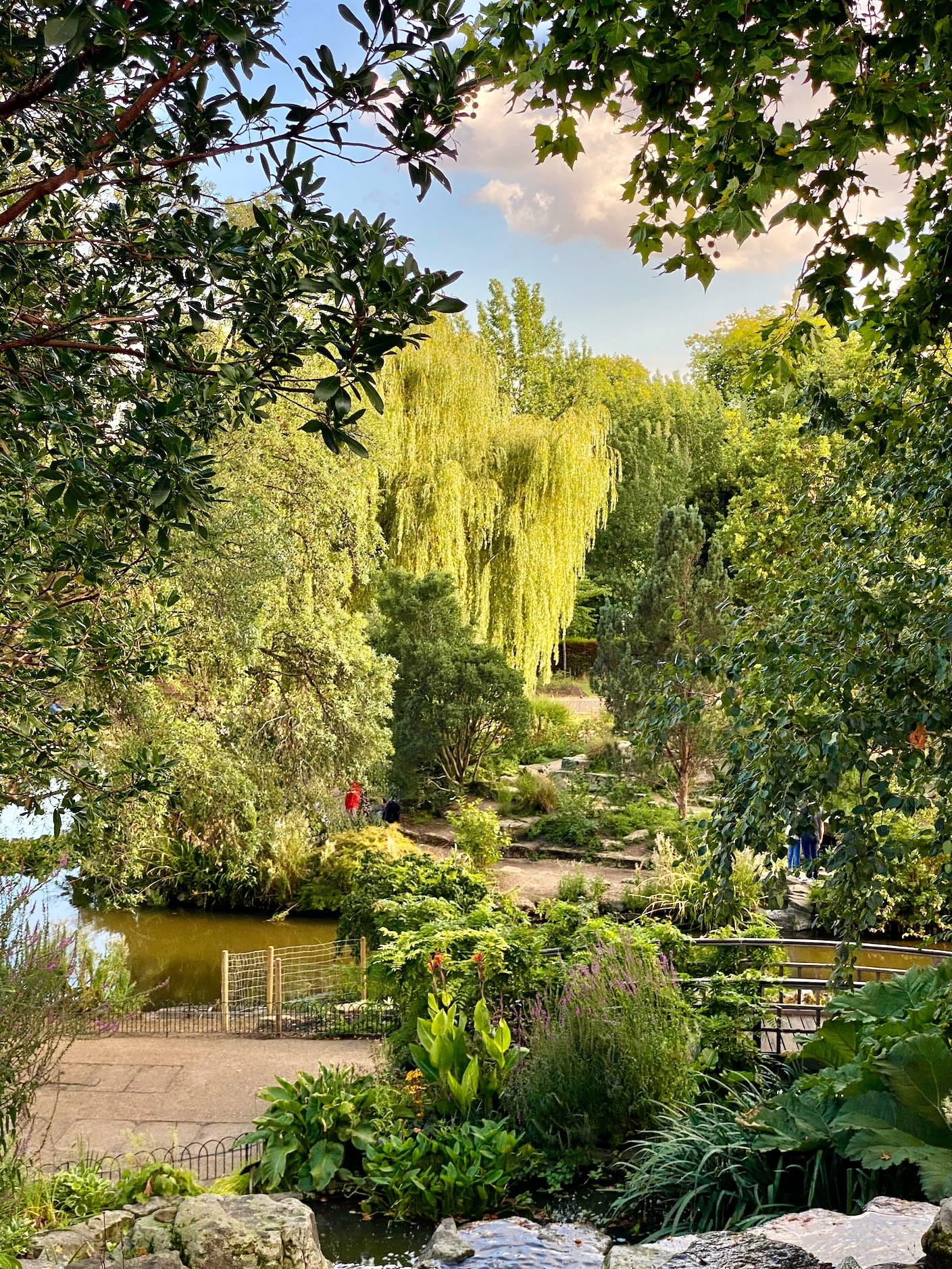 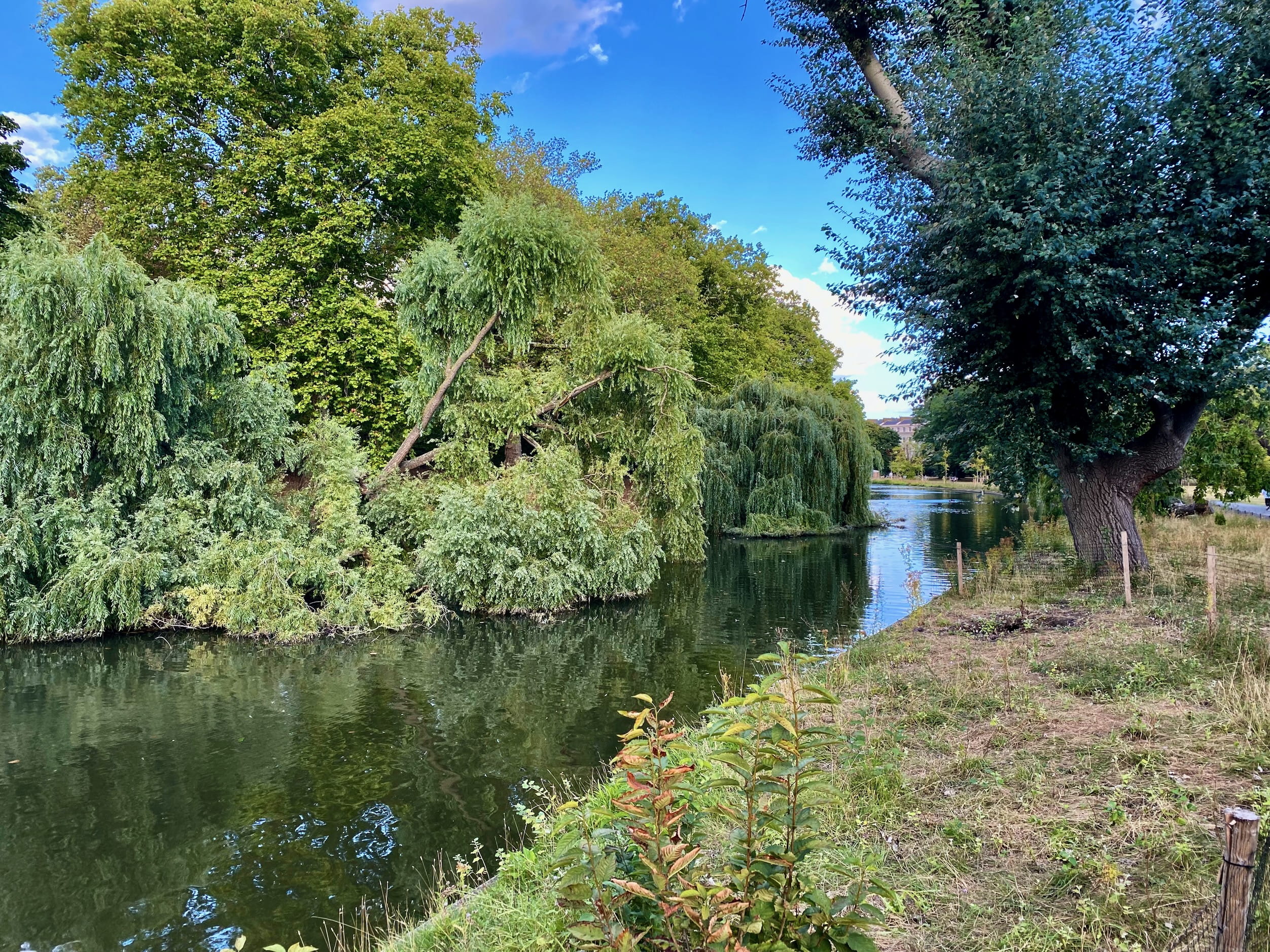 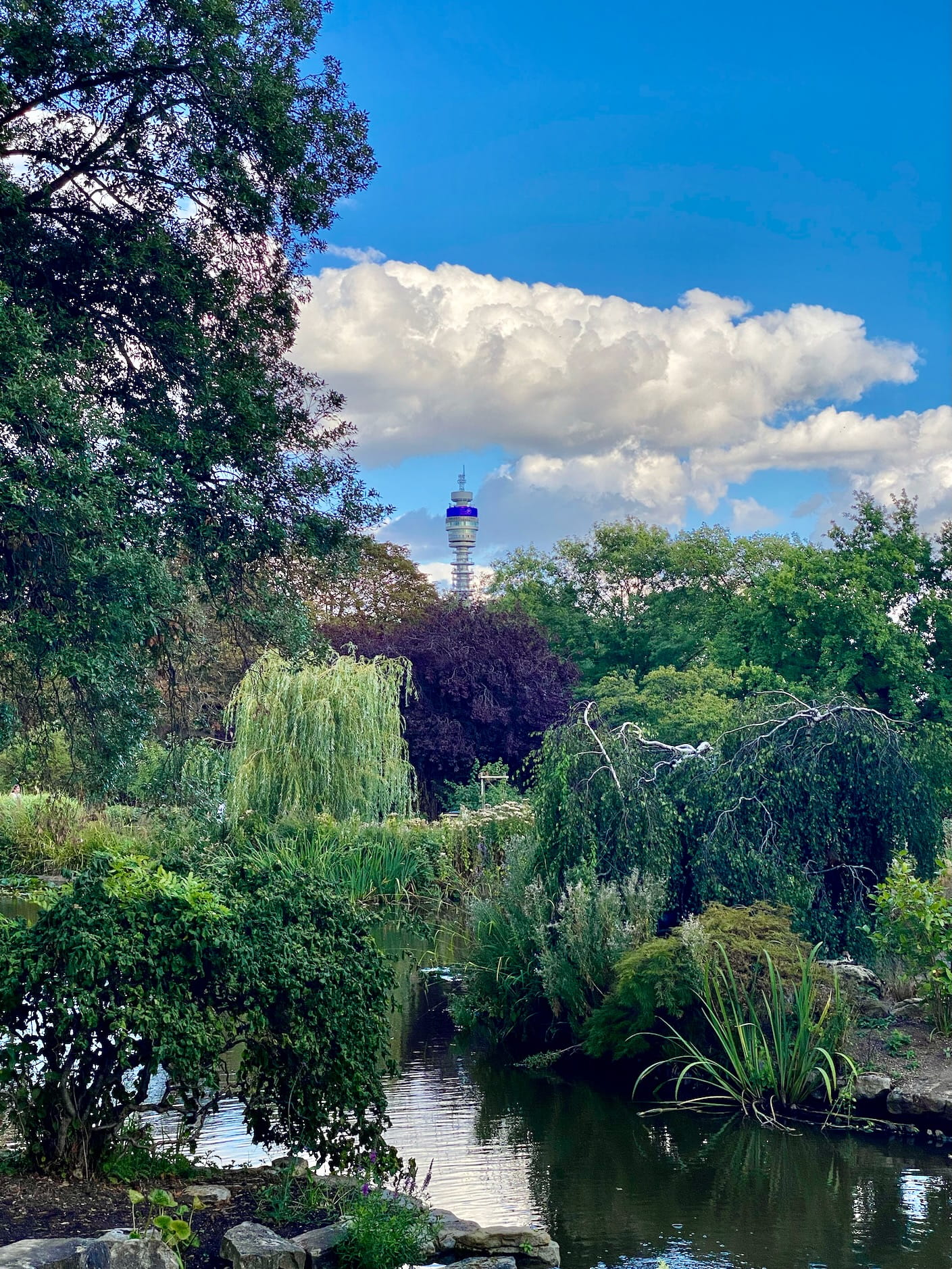 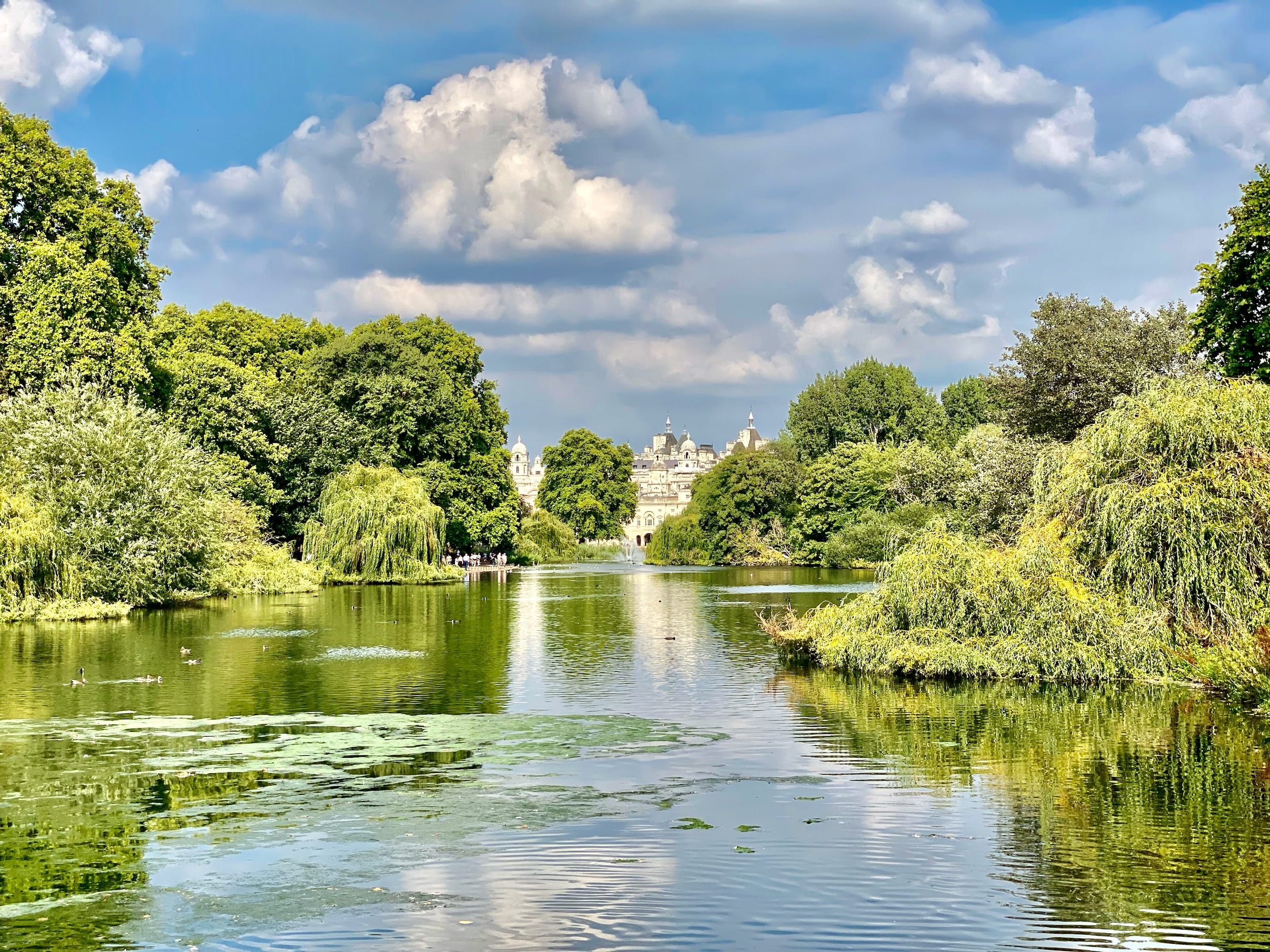 Some of the public parks were quite nice as well.

This is an instance of my central struggle while traveling: the local vs tourist divide. If you aren’t going somewhere to relax or cash out an Instagram checklist, you’re probably tying to experience what it’s like.

Along the way, you’ll confront several obstacles. Some you impose on yourself, like requiring familiar comforts, being unwilling to try new things, or succumbing to FOMO and visiting the long list of places you’re supposed to photograph. Some others will accidentally set up for you, like well-meaning tours that have you look at a city through the windows of a bus. And still others, the traps and scams, are laid by those seeking to make a buck off the desire to try a novelty or grab a momento.

But the biggest obstacle, I submit, is time. You need time to actually know a place. Even if you have the best possible help—a local friend happy to show you around—you can’t truly shortcut the process of getting to know a place. You must live there. You need to find the spots, food, people, and activities that you like, but you also need to find the ones you dislike. (And you probably need to speak the local language.) Only then does a place begin revealing its full range of colors. 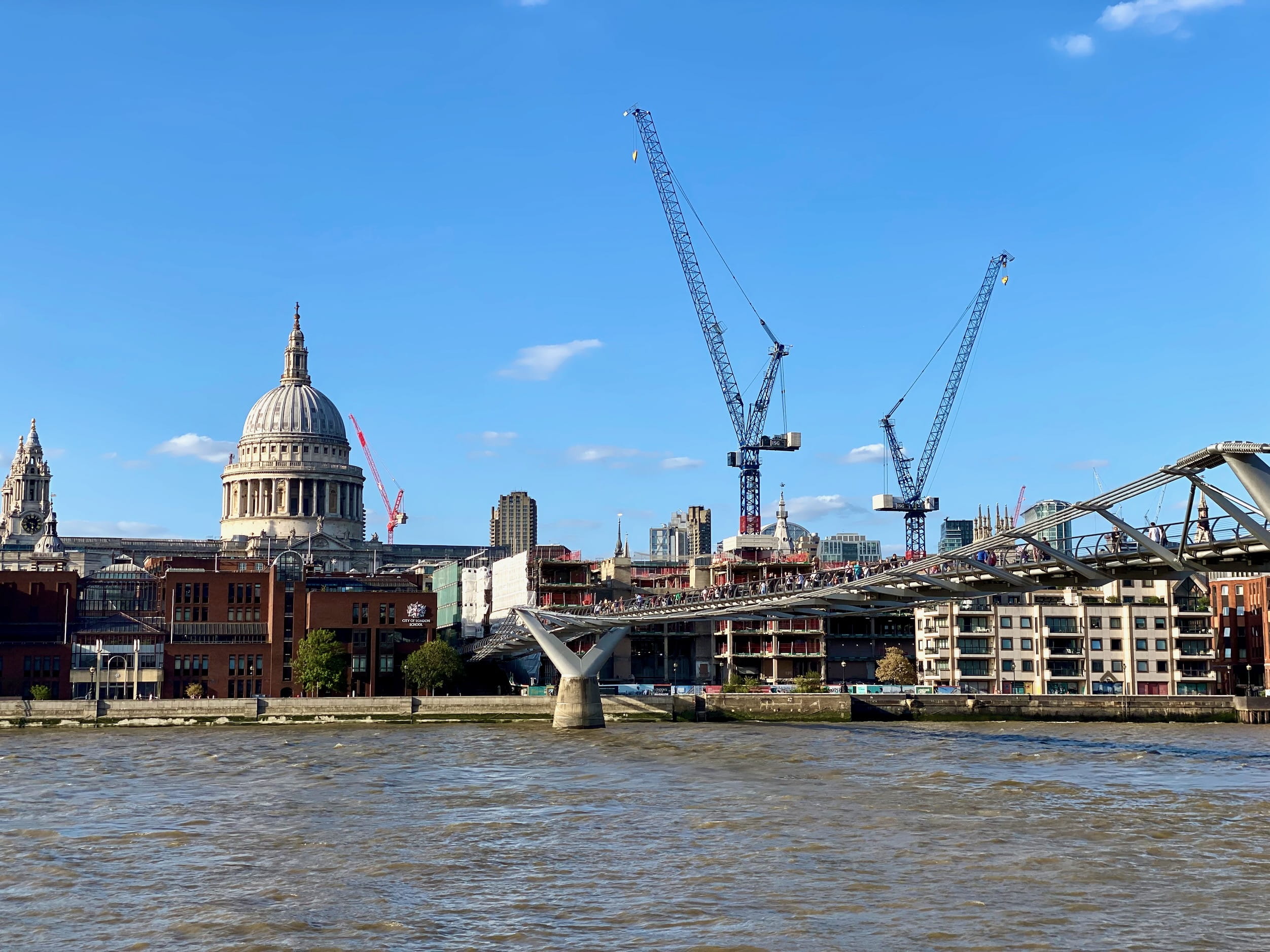 Another aspect of local vs tourist perspectives is reliance on signage to know where to go. I spent probably fifteen minutes trying to figure out how to get on this bridge, and I literally could not figure it out. So I gave up and walked to another bridge. This is despite encountering multiple signs trying to direct me onto it. This problem evaporates when you know your way around.

This is why I’m hesitant to write anything bad about places I visit. First, because complaining—unless it’s funny—isn’t that fun to read, and sets a bad habit for your own mind. But mainly, I don’t want to give the impression that I truly know a place’s palette, its ins and outs, and have found it impossible to find it interesting or enjoyable.

So anyway, this is all to say: there we were, blasting around London for a few days, finding it hard to walk through. But if we’d had, say, a month, we’d surely have honed our destinations and routes, and we might have thought the opposite.

Yotam Ottolenghi, writer of delightfully creative vegetable-based cookbooks and owner of a small empire of restaurants, is based in London. We submitted our wallets to his pastry powers. 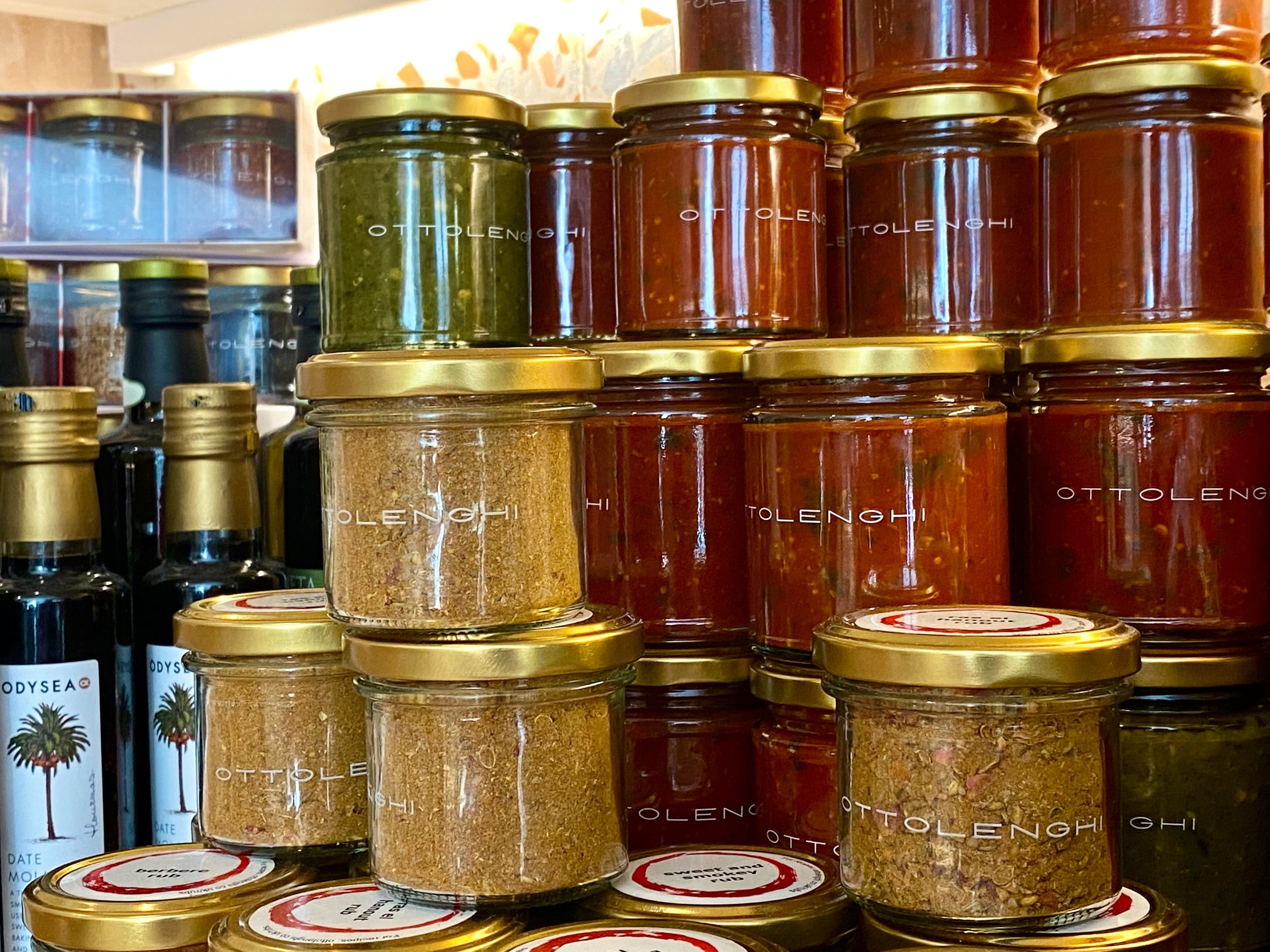 When I look back at this photo, the only phrase that seems fitting is: "Ottolenghi ALL THE THINGS." 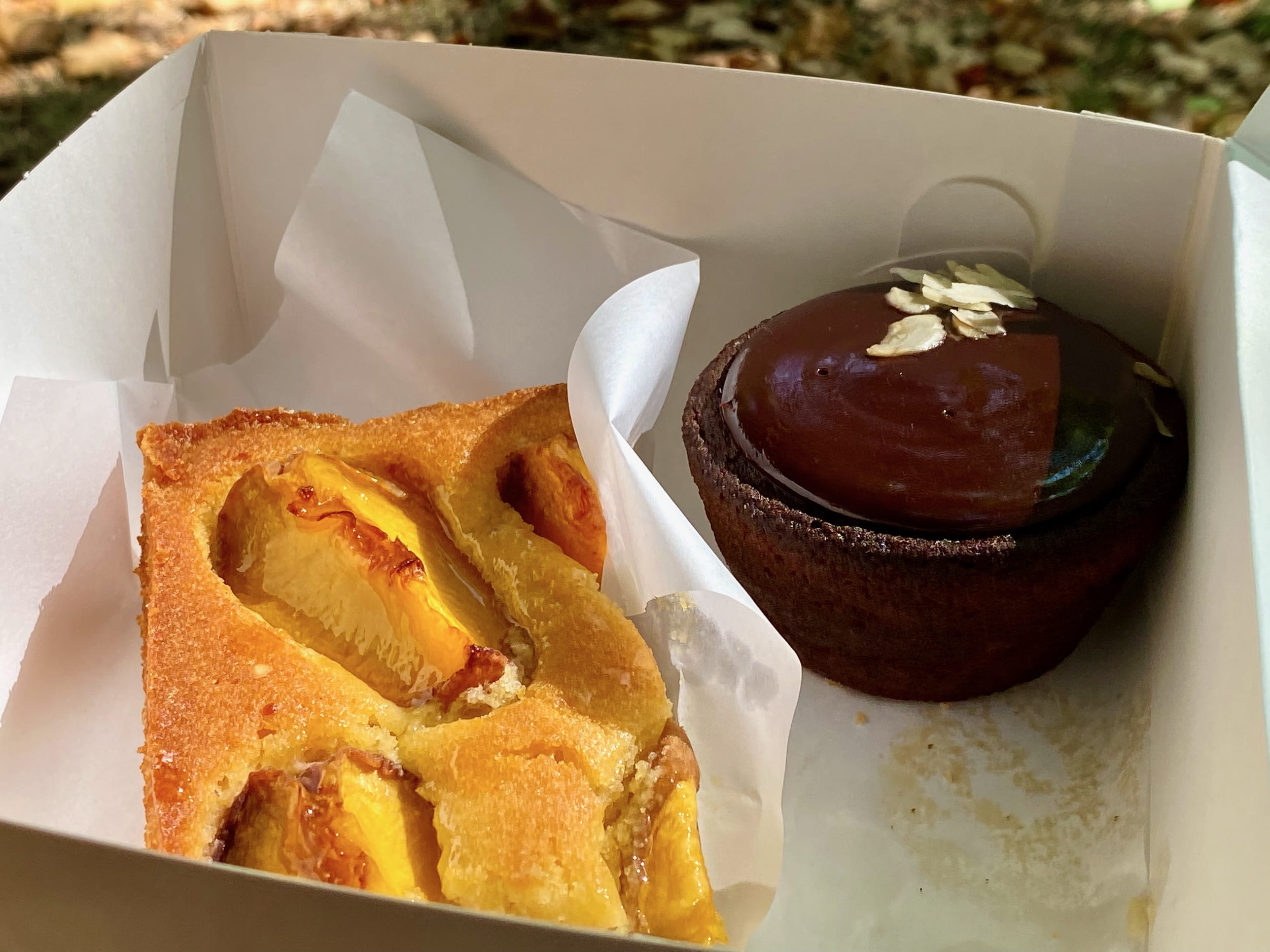 Damn if he didn't nail one of these, though I can't remember which.

I have, again, saved you from a bunch of pictures of food.[7] Instead, here’s another welcome comfort: hipster cafes. 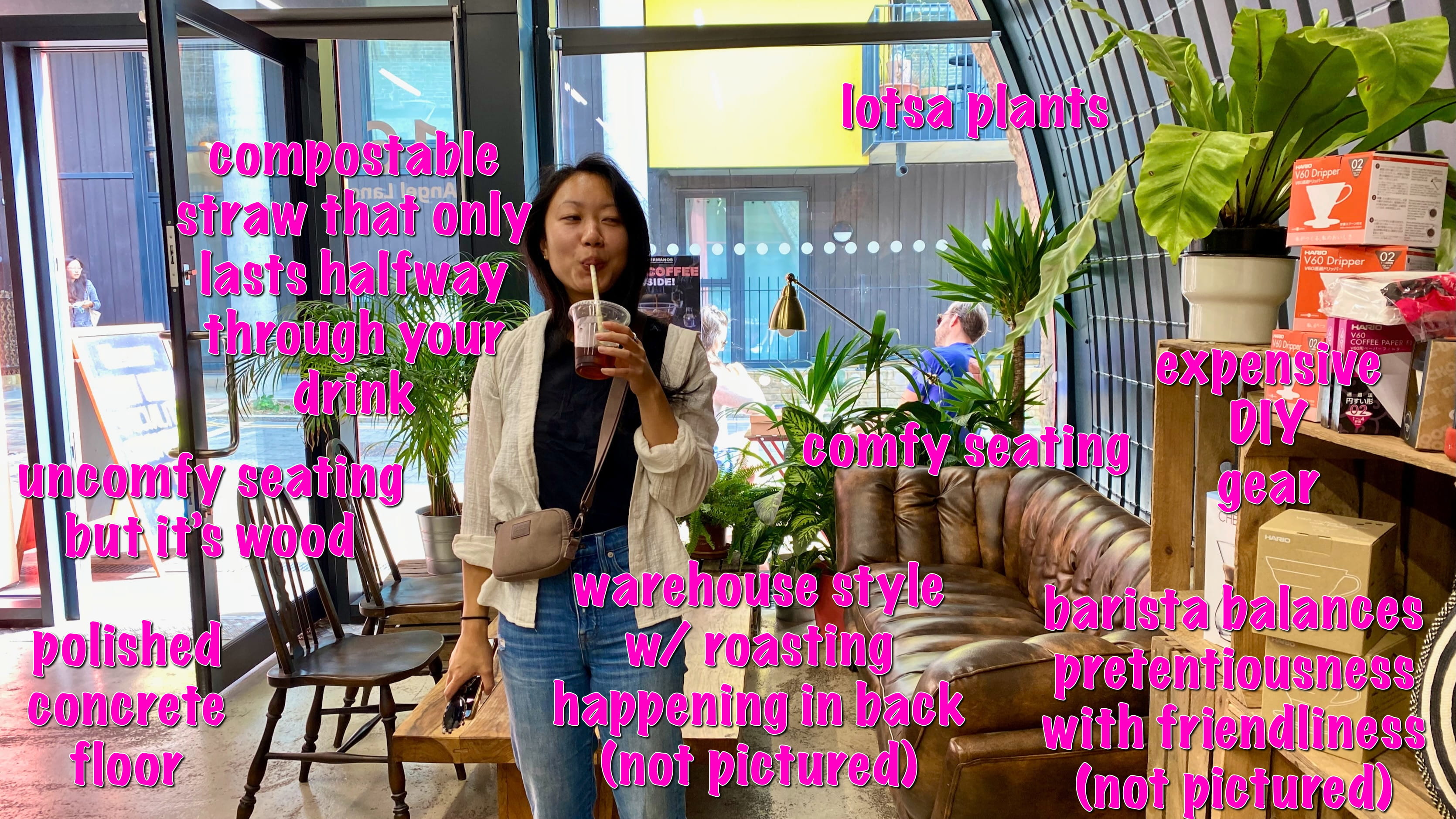 One things microwaves and washing machines have in common is they both sometimes have a pizza button.

I loathe these buttons. What, exactly, do they do? Does anyone actually use them?

Another addition to America Abroad collection, the American candy store 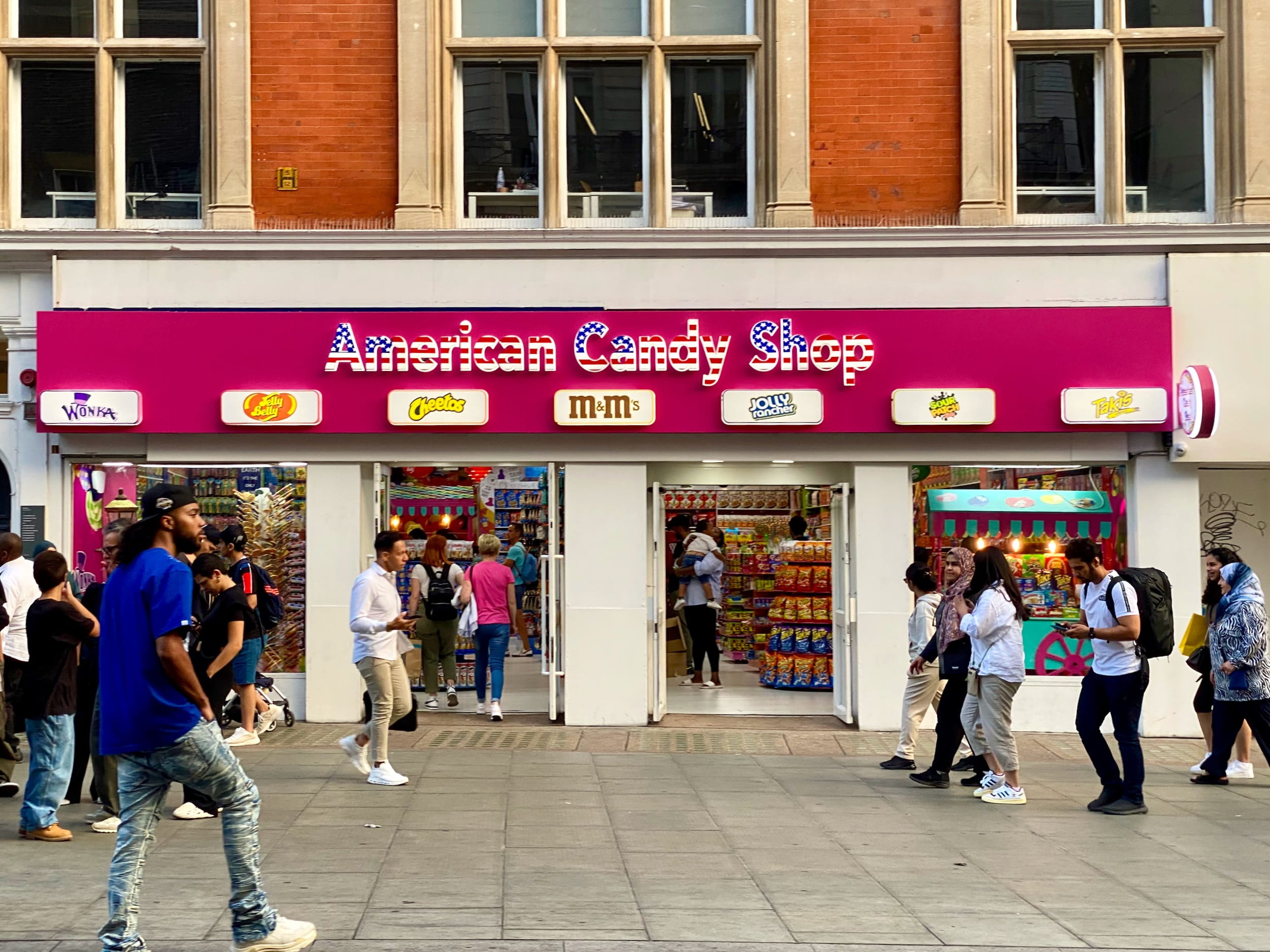 OK here’s a nice one: this bus has a TV screen that simply shows you what it looks like out the front of the bus, because you can’t see out from your seat. 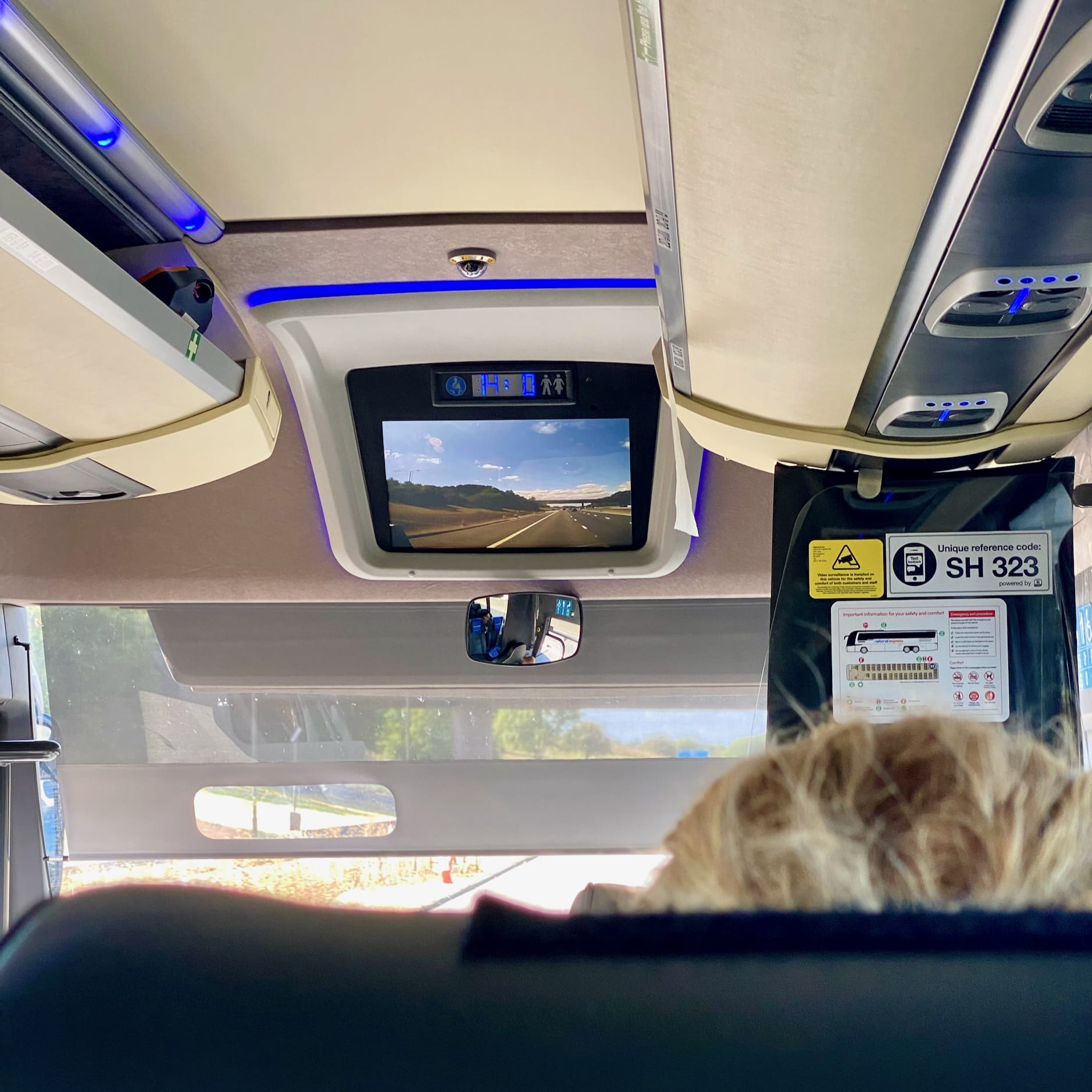 Sounds trivial, but this was super nice to have. It's satisfying just to see where you're going.

English airports get the award for the only places that actually make you put all your liquids in a bag. 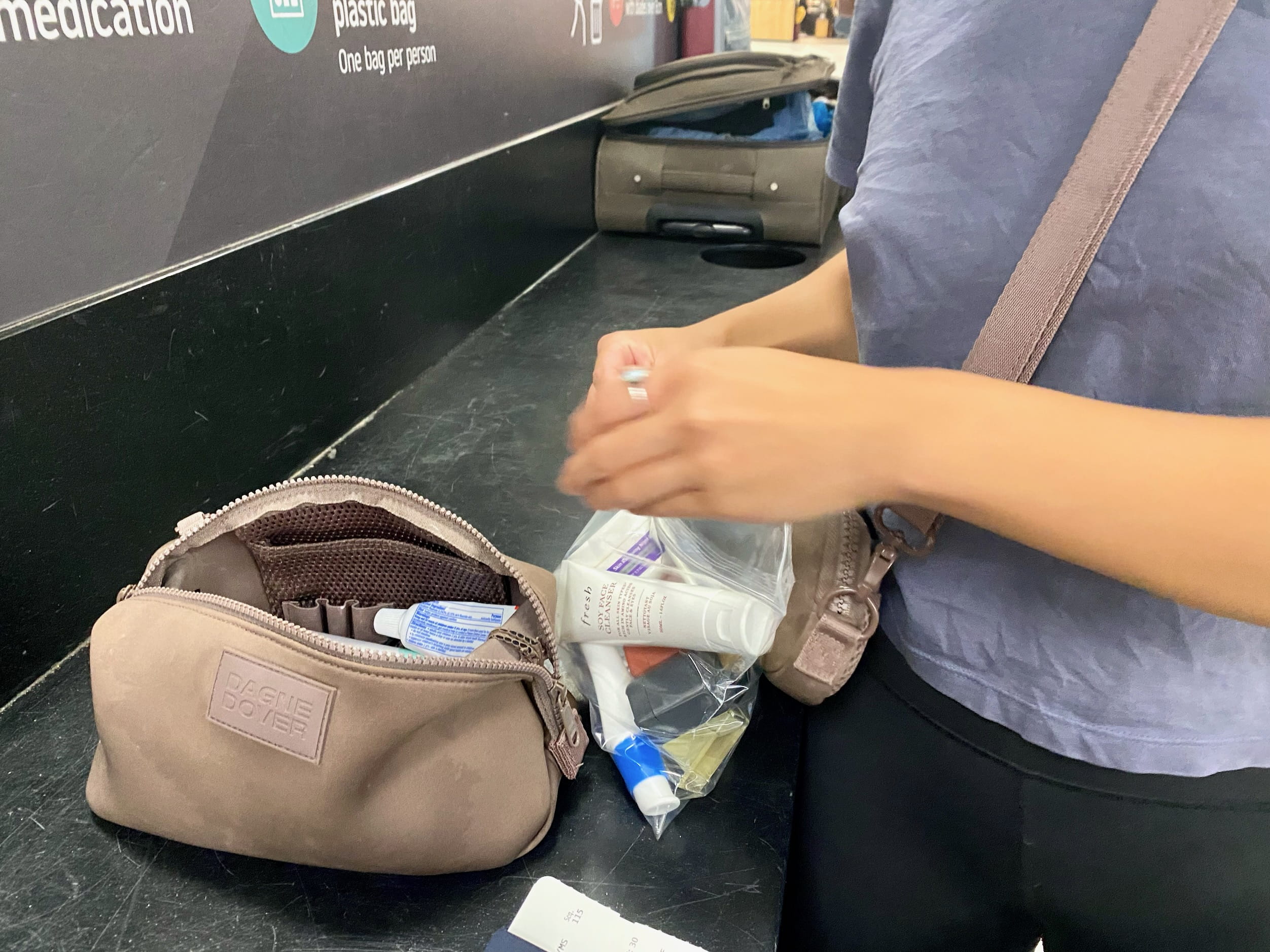 They must go through an ungodly number of these a day.

Ever wondered about the UK flag? Turns out the composition is pretty cute: 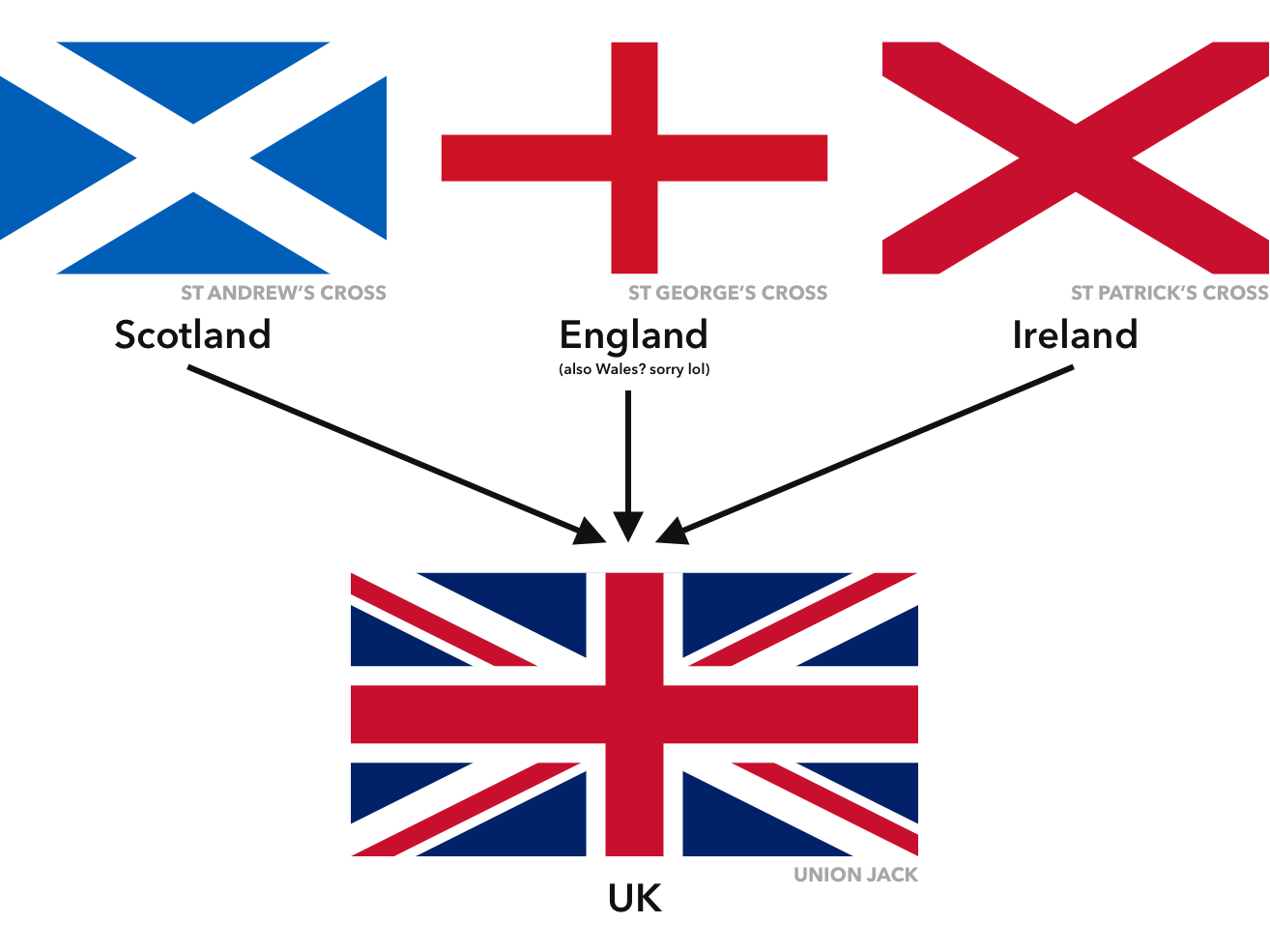 Nothing says Christianity quite like three different crosses layered on top of each other. Actually, I hadn't realized that elongated X and + shapes like these in flags were actually Christian crosses. Now that I knew that, I started noticing them way more. BTW, as usual things are controversial here. Just picking Ireland's contribution: Most Irish nationalists and others reject its use to represent Ireland as a "British invention" "for a people who had never used it" (Wikipedia).

One thing I do remember from past trips is being surprised that Big Ben is connected to other buildings (Parliament, right?). In my mind’s eye, it’s always alone, a solitary huge clock tower. Not sure why. 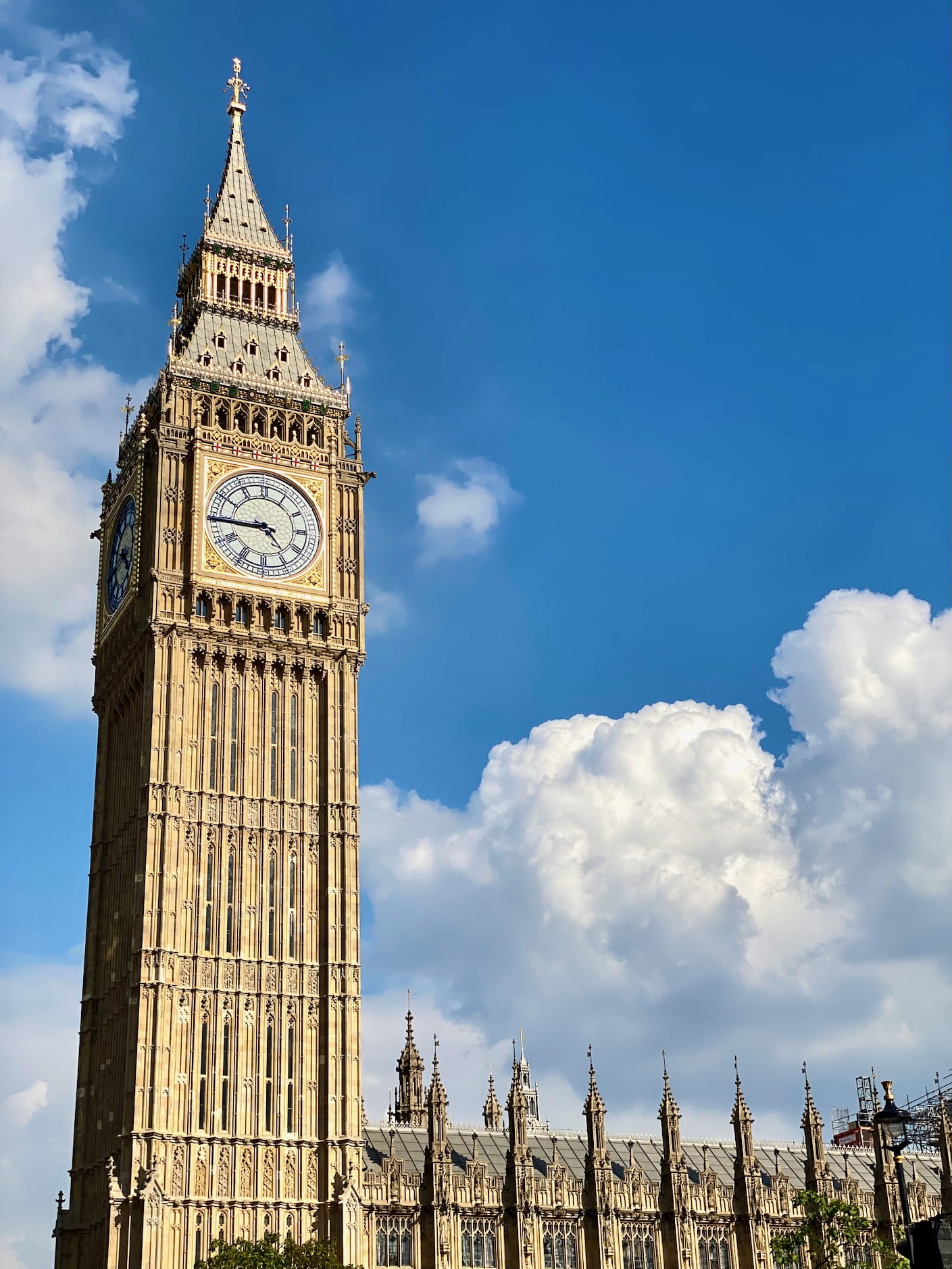 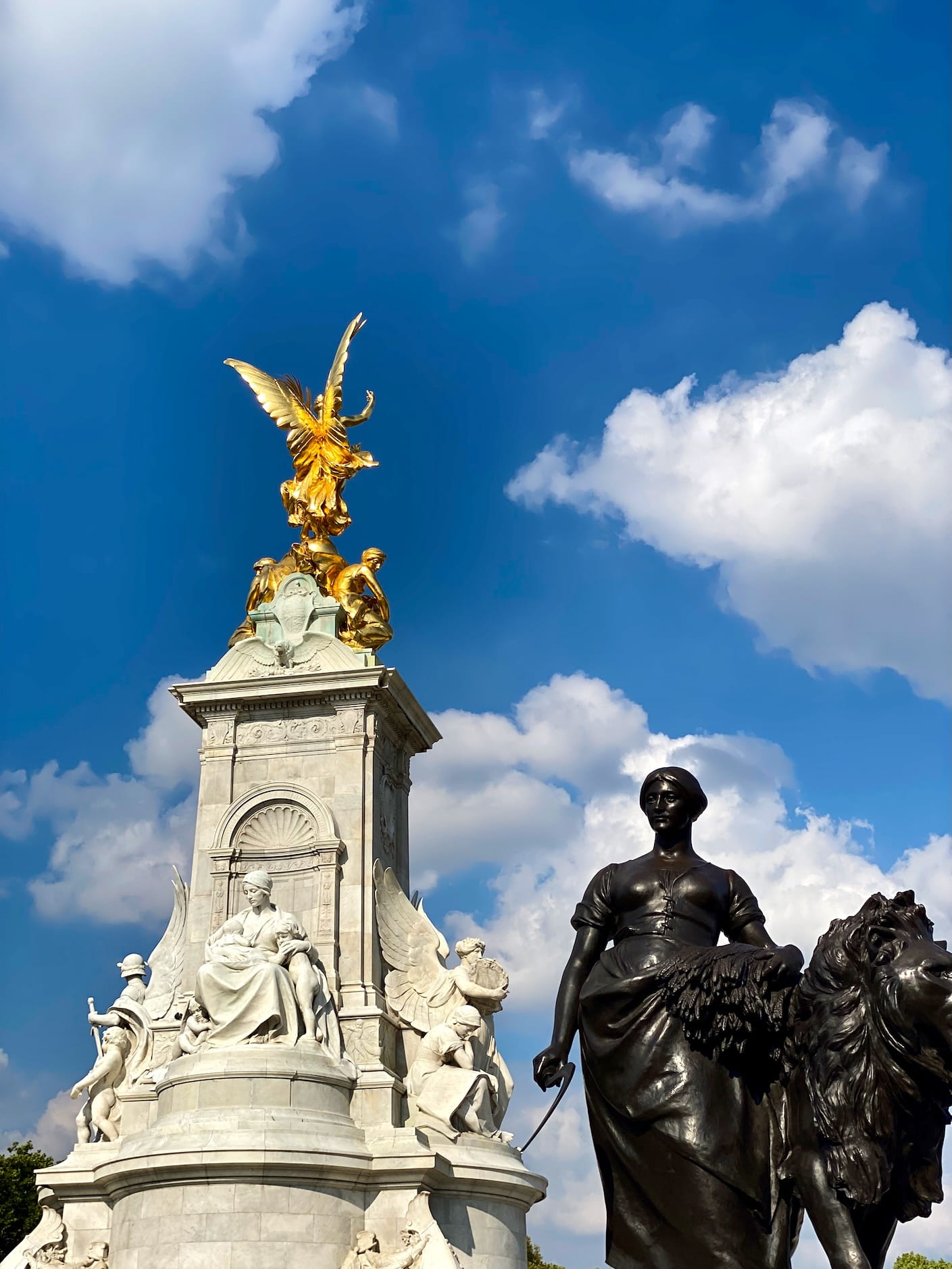 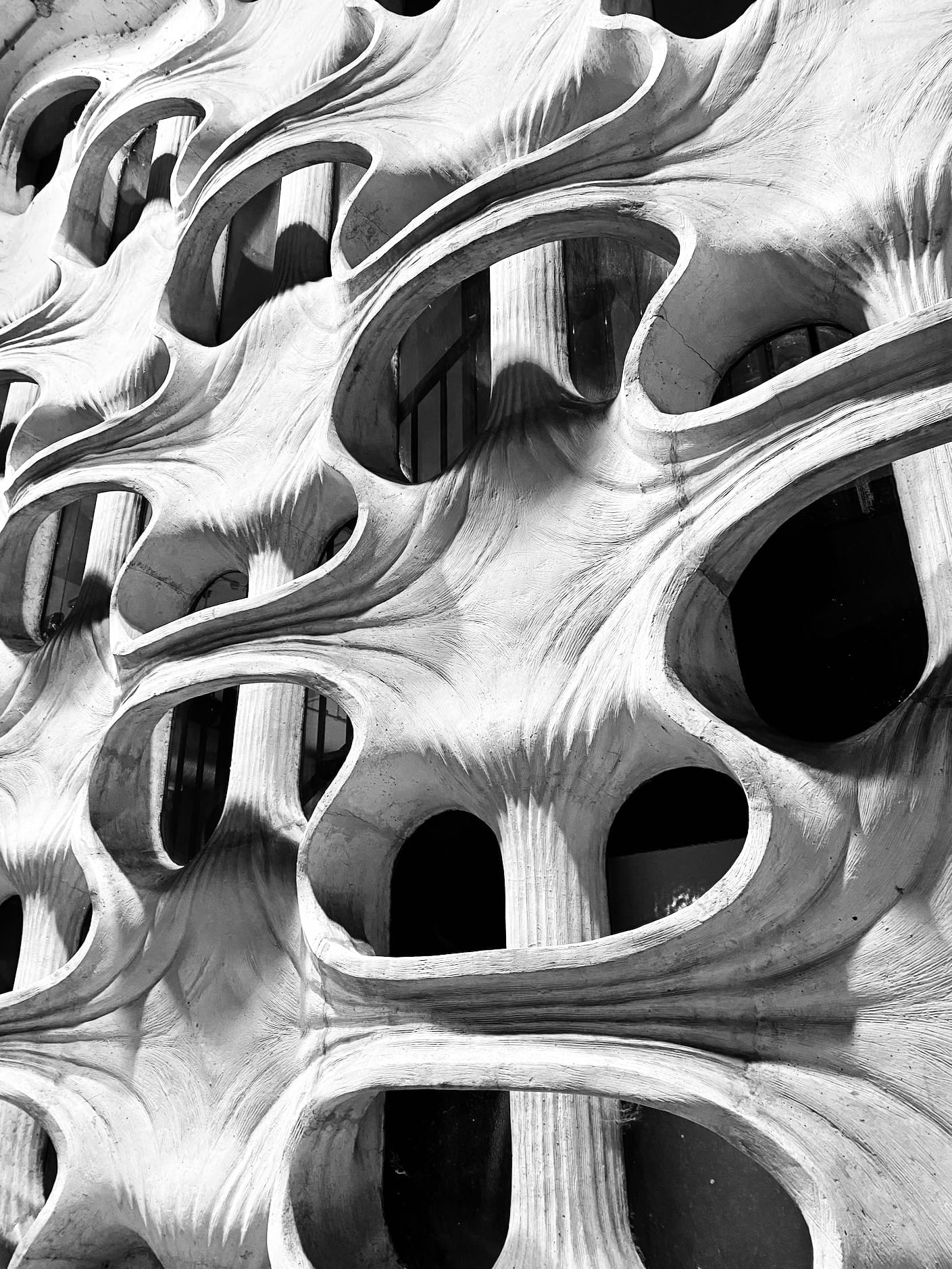 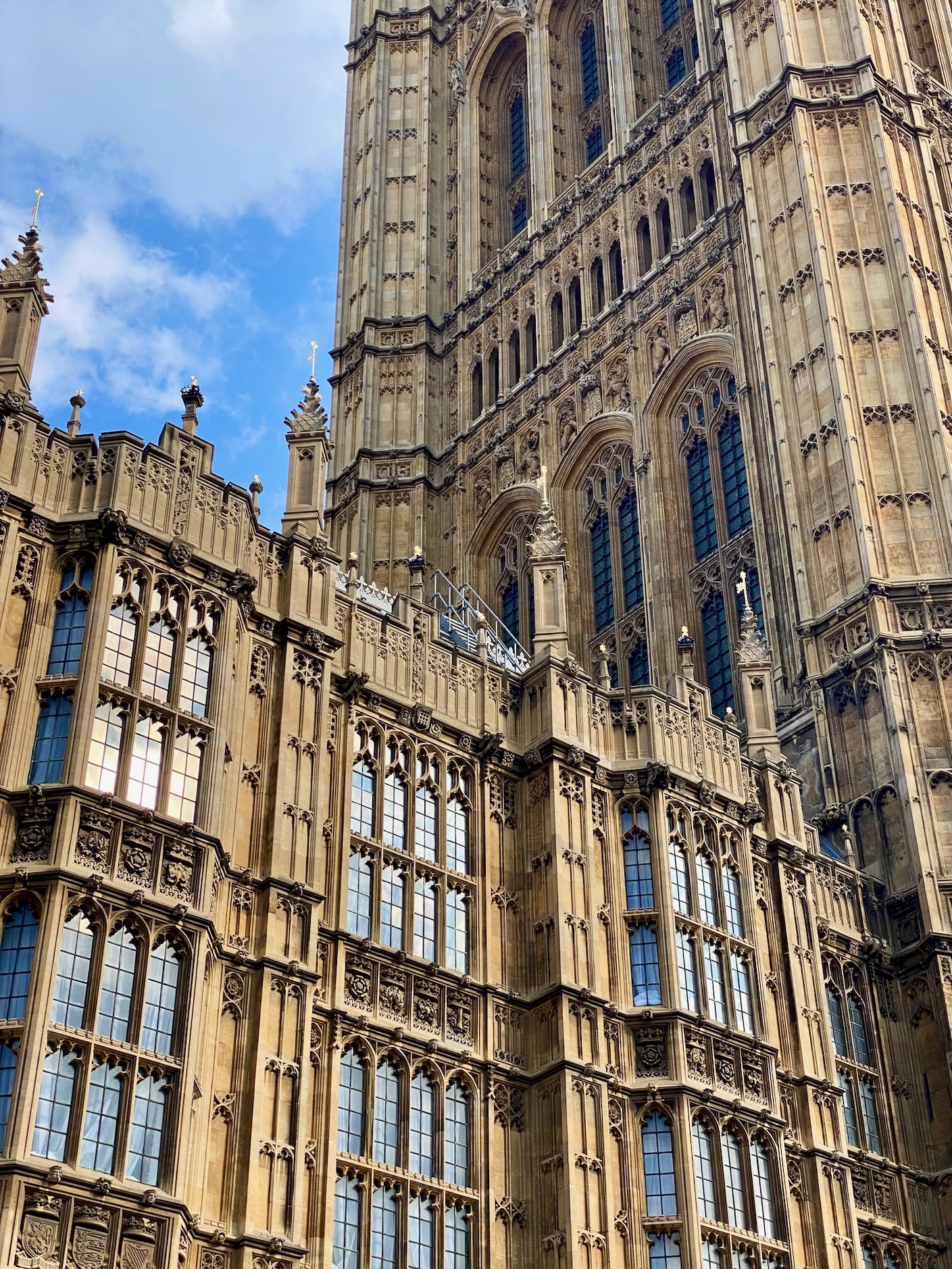 This time around, I was struck by awe of the scale and detail of the Big Ben / Parliament / enormous church exteriors.[8] Something about the massiveness combined with the ornateness gave these buildings a terrifying beauty. They were impressive as achievements.

But I found myself most fascinated by bizarre bulky geometric buildings like the one in the next photo. They felt like brutalism meets '80s glam sensibilities. 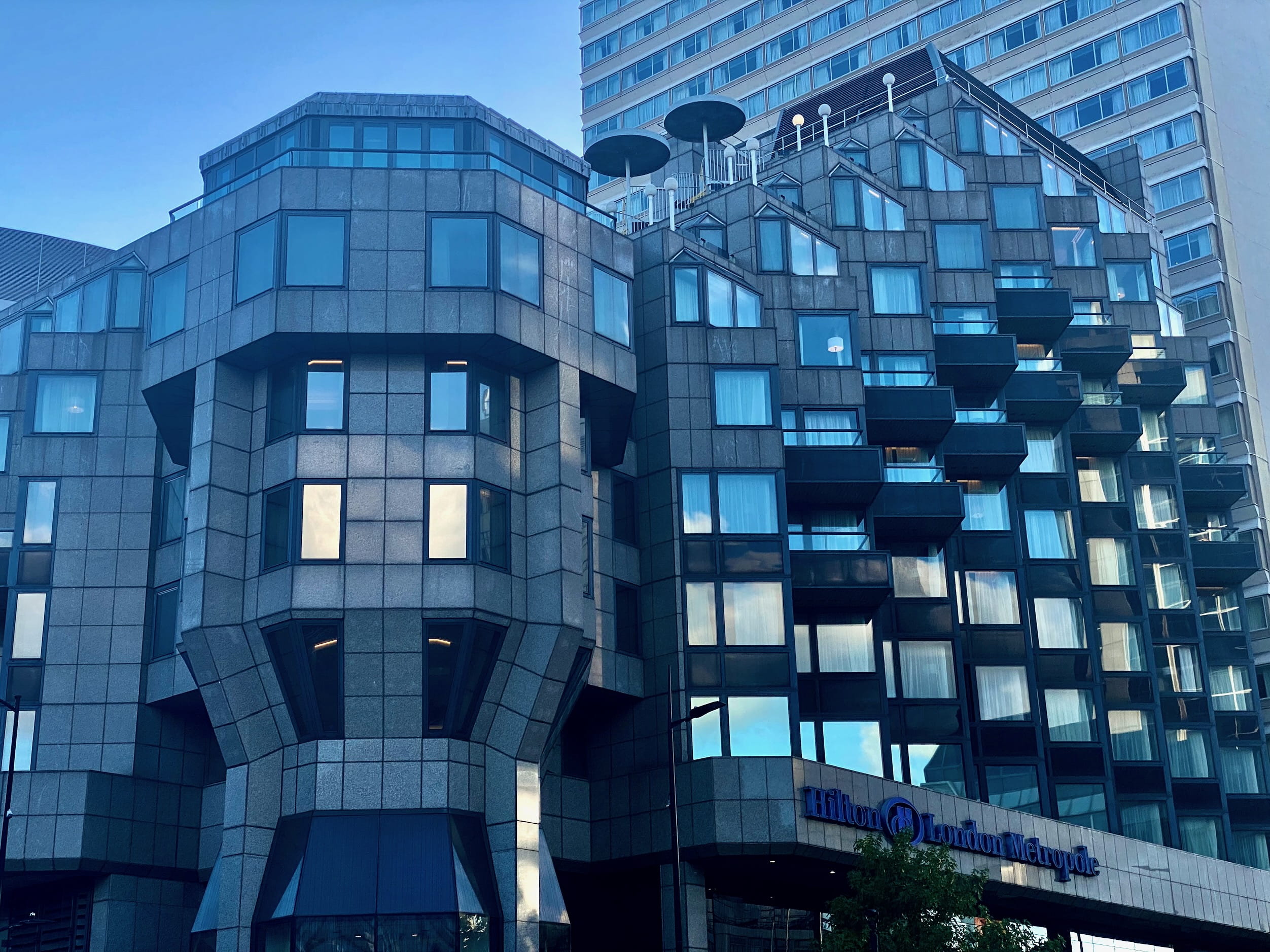 Luckily for me, Serbia—our next stop—would scratch this architecture itch in a big way.